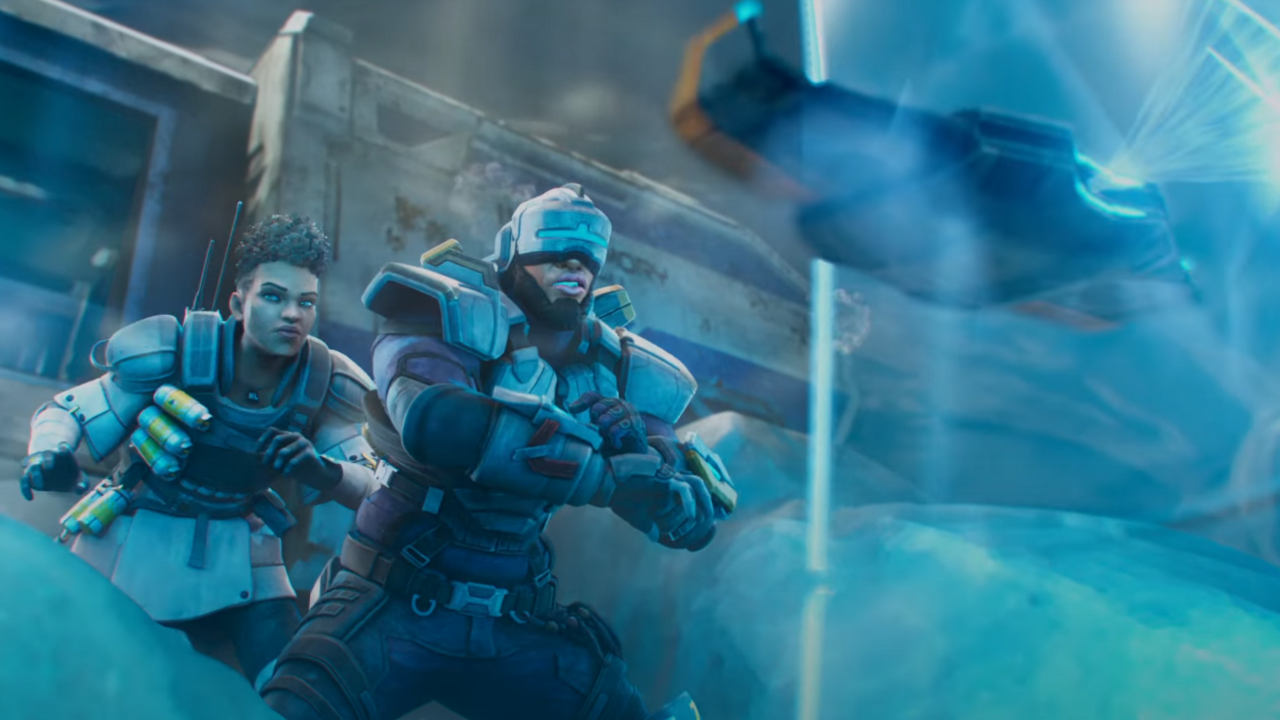 Hot Drop: Newcastle’s Powerful Abilities Make Him A Great Protector, Like A Rook In Chess

Hot Drop is GameSpot’s weekly Apex Legends column, in which Jordan Ramée takes a closer look at Respawn’s battle royale to provide additional insight into the game’s evolution, as well as dive deeper into its episodic storytelling and characters.

From the get-go, Jackson Williams has been characterized as a piece on a chessboard. Specifically, he’s been compared to a rook, the castle turret-looking piece that can only travel horizontally across the board. Now that Jackson is officially a legend, releasing in Apex Legends Season 13: Saviors as Newcastle, the rook connections aren’t letting up–Respawn told GameSpot that the chess imagery informed Newcastle’s appearance, voice lines, and ability kit.

“Very deliberate [connections],” Apex Legends senior producer Tim Lewinson told me when I asked about the lone rook sitting in front of Jackson in the Stories from the Outlands: Gridiron trailer, and Newcastle’s “checkmate” comment in the Saviors launch trailer. “Glad you caught it. There’s probably some other Easter eggs that you’ll find as well, sort of referring to that chess connection.”

Narratively, I find this connection to be fascinating. If Newcastle is a chess piece, who’s the person that’s controlling him? In terms of the story, what chess board is Newcastle metaphorically fighting on? It could just be the Apex Games in general, but I think it’s more than that.

A few weeks back, I theorized that Apex Legends is heading toward all-out war, and I still think that’s the case. But something else is going on behind the scenes, and it involves Newcastle. Jackson is, notably, filling in for the actual Newcastle (who is dead) in an effort to pay off the gang threatening his family’s home. The gang is called the Forgotten Families.

This is the second time a debt-collecting gang with a connection to “family” has appeared in Apex Legends–just ahead of Season 6, the Stories from the Outlands: The Endorsement trailer saw Rampart’s shop burned down by a group led by someone called “Big Sister.” I think the two gangs are one and the same, with Big Sister being one of the bosses for the Forgotten Families.

Newcastle isn’t in the middle of all this yet, but perhaps Respawn is setting him up to be. In chess, the rook has a special move called “castling,” in which both it and the king can move on the same turn, essentially switching places. Players traditionally use the move to get the king to a more secure location, while also ensuring the rook is now closer to the middle of the board and in a better position to defend or attack. So maybe Newcastle isn’t in the thick of things right now, but what if someone from the shadows decides to “castle” him into the midst of a conflict to protect a “king?”

And don’t tell me I’m thinking too hard about this. Respawn has already considered the nuanced mechanics of chess when designing Newcastle’s moveset, so relying on it for his backstory doesn’t seem like a huge stretch.

“I’ll even go as far as to say that [chess connection] was not off the table when we were talking about [Newcastle’s] ultimate in his kit,” senior character designer Devan McGuire told me. “There’s the classic move in chess where you castle–replace your king with your rook, who becomes the guardian for it–which is kind of what you do with the move itself. And it’s why we structured [the ultimate ability] to become a castle wall so that it played into that chess fantasy.”

Newcastle’s ultimate ability sees him leap into the air and then slam down on the ground shield first to place a massive wall. “He can totally use it indoors to block up a choke point or a door,” McGuire said. “So if there’s some wall or something in the way, it will not continue expanding outwards, and it will only open those little side edge walls if there’s enough height or space for that to open as well. So if you use it somewhere contained, you’re potentially not getting the full breadth of the shield, but you are still able to use it in situations where you need to, to give you the cover that you want.”

There’s an additional, almost passive-like ability tied to Newcastle’s ultimate as well. “It really shines when Newcastle targets an ally,” McGuire said. “So when you bring the helmet visor down and you pull up the ultimate, you have this auto-locking mechanic on your allies–they’ll pop up on your hud in the environment. You can lock onto them provided they’re not buried in a bunker or something where you can’t actually reach them, and then leaping to them gives you more height and you can go much farther than you could before with the normal range, allowing you to heroically clear over tall buildings and reach [your teammates] in very, very quick succession to turn the tide of the fight.”

“The HP value between the knockdown shield itself and the revive shield that it carries is not one-to-one–it’s actually a slightly lower version,” McGuire said. “Let’s use the white knockdown shield as an example. It starts with 200 health as a knockdown shield. Newcastle only gets 150 of that for his revive shield. And that leftover 50 HP is what you would have left if you yourself got knocked down after burning through your revive shield. But, he has this secret passive, where he can actually recharge his own knockdown shield as long as he’s not using it. So if he’s not down or he’s not reviving somebody, then after a brief cool down, it will start building itself back up, so that he’s ready for that next encounter.”

Meanwhile, Newcastle’s tactical ability is a deployable energy shield that he can redirect on command, allowing him to set up and provide moving cover for his teammates. “It’s great for advancing the front line and pushing on that enemy position,” McGuire said. “So while it’s out in the open, Newcastle can press his tactical button again to redirect its position to a new position on the map, which means you can turn a corner with it, or as you breach a building, you can pull it back.”

To me, it sounds like Newcastle fulfills a tank role in Apex Legends, a class of character that technically doesn’t exist in the battle royale. Up to this point, Gibraltar has been the closest to a tank that Apex Legends has ever had, making him one of the most dominant forces in professional play and the higher tiers of Ranked. No way of knowing if Newcastle will be similarly dominant until he’s actually live in the game, but he at least sounds like a promising pick. And I can’t wait to see where his story goes, especially if Respawn continues to lean into that chess imagery for Newcastle’s arc.

Denial of responsibility! TechiLive.in is an automatic aggregator around the global media. All the content are available free on Internet. We have just arranged it in one platform for educational purpose only. In each content, the hyperlink to the primary source is specified. All trademarks belong to their rightful owners, all materials to their authors. If you are the owner of the content and do not want us to publish your materials on our website, please contact us by email – [email protected]. The content will be deleted within 24 hours.
abilitiesagmeupdateChessDropGames newsgamingGaming updategreat
Share

Norton thwarted more than 1.95 lakh cyberattacks a day in India in January-March

Day will come where India won’t have to be at Cannes, Cannes…