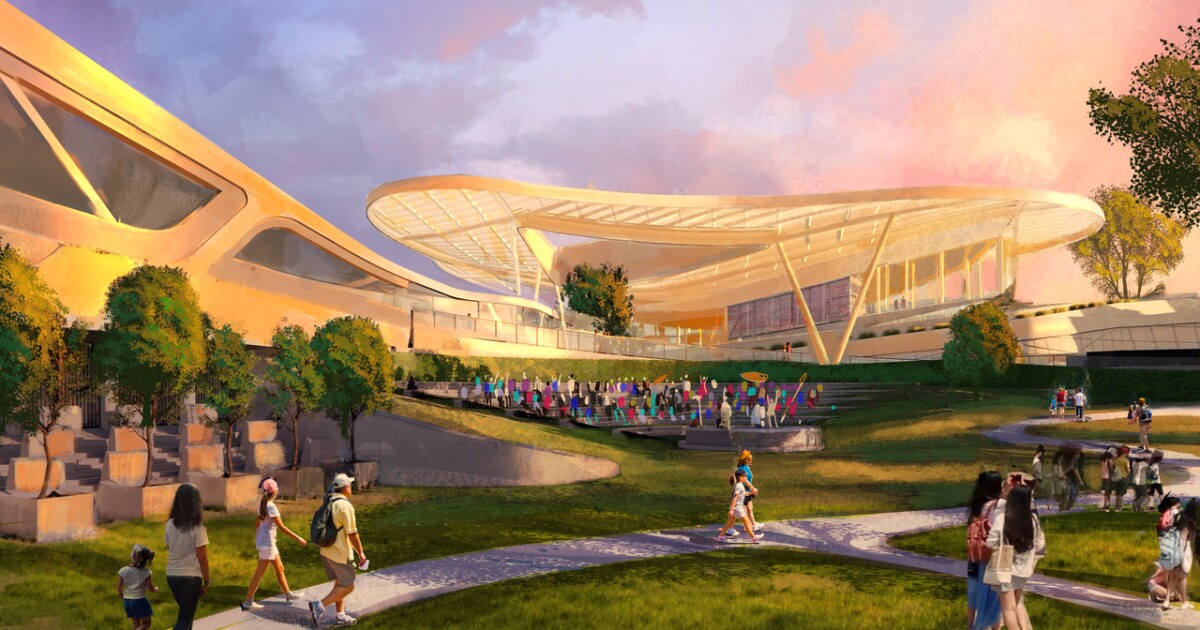 When the Holocaust Museum LA (then known as the Los Angeles Museum of the Holocaust) settled into its permanent home at Pan Pacific Park in 2010, the ultimate goal was to draw an estimated 15,000 visitors every year. It not only met that goal the first year out, it exceeded it. By the time the COVID-19 pandemic rolled around, the museum was drawing upward of 65,000 people every year, far beyond its original plans.

Now the goal is to attract even more visitors: 500,000 per year by 2030. “We’re giving ourselves plenty of time,” says museum Chief Executive Beth Kean. “We are hoping to get to 150,000 over the next few years. … We have a trajectory plan to take us there.”

To that end, the museum is planning an expansion that will nearly double its footprint from 28,000 square feet to 50,000 square feet. The addition will include a new 2,500-square-foot gallery for temporary exhibitions, a 200-seat theater for film screenings and panel discussions, as well as two classrooms. The addition will be designed by Hagy Belzberg, principal of the L.A.-based firm Belzberg Architects, who designed the museum’s current home.

“We are not a giant museum,” says Belzberg, who is also a member of the museum’s board. “If you want to look at something when there is a busload of kids there, it’s hard to have an intimate relationship with the object.”

The extension will help alleviate crowding. It also will add a new, more prominent building to a museum that currently maintains a very quiet presence on the Los Angeles landscape.

The current building, which lies partially underground and features a sloping green roof, looks like an extension of the undulating parkland that surrounds it. The new plan will alter that profile by adding a rooftop pavilion that will house a railroad boxcar found near the Majdanek concentration camp in Poland.

Visible from the street and Pan Pacific Park, it will make the museum, with plans to illuminate the new pavilion at night, much more prominent.

“You can be having a picnic in the park and you look up and it’s there,” says Belzberg. “It’s this esoteric statement about never forgetting.”

Founded in 1961 by a group of Holocaust survivors, the museum, in its early years, moved between several rented locations on Wilshire Boulevard, including an office building. In 2003, a search for a permanent home led to a 50-year land-lease deal of $1 a year for city land in Pan Pacific Park. Seven years later, the museum opened its current 28,000-square-foot structure just south of the intersection of Beverly Boulevard and the Grove Drive.

It wasn’t an easy site to work with. Immediately to the north lies a postal facility. Across the Grove Drive to the west are a multitude of parking garage entrances for an apartment complex and the Grove shopping center (which seems to reserve the complex’s worst urban elements for the street it had named after itself).

Belzberg responded with a design that tucked the museum into the landscape. Visitors enter via a zigzagging path that descends into the building. As you move deeper into the building and deeper into the violent story of the Holocaust, daylight recedes. The museum’s curving interior rooms are made with a type of spray-on concrete (shotcrete) that gives the interiors an appropriately somber mood.

When the building opened, Christopher Hawthorne, then The Times’ architecture critic, described it as “an elegant, energy-efficient and economical building whose stance toward the city, and toward history, is oddly deferential.”

Its low profile has made for a contemplative space, but also one that can get a little lost amid a rather inhospitable street.

“One of our goals with the expansion is to illuminate the building,” says Kean. “We want to catch people’s eyes. We want it to be a striking museum and an iconic landmark. We don’t want it to be hard to find.”

That elevated boxcar pavilion, which will be added to the existing building, will achieve some of that.

So will a building that will be constructed to the south on land that hugs an existing outdoor amphitheater and is currently included in the museum’s land-lease deal with the park. That structure will add the theater, classroom and additional gallery spaces — as well as space for an interactive installation titled “Dimensions in Testimony” created by the USC Shoah Foundation, in which a viewer can ask questions of a holographic representation of a Holocaust survivor. (The museum already has a version of the installation on view.)

If the 2010 building is a descent into darkness, the new one, says Belzberg, will be a lighter experience — one that speaks to the future and to resilience. Between them will be a large outdoor courtyard that will provide a visual break. “There is a functional rationale, but also a conceptual one,” says the architect. The buildings each refer to history’s “past and future.” The courtyard, he says, marks the present. “We made the present open.”

By moving the temporary exhibitions to the new building, the older one can devote more space to its permanent collection, which includes letters, photographs, vintage newspapers, artifacts from Auschwitz and a 19th century Torah scroll from the Czech Republic. The additional space also means the museum can better accommodate the numerous school groups that come through.

“Now you can separate them,” says Belzberg. “One can start below, one can start at the learning pavilion and one starts at the boxcar. It’s a much better experience.”

Kean says the expansion is important for other reasons too.

Part of this will involve connecting the experience of the Holocaust to conflagrations of violence in other communities.

“The Holocaust is not just a Jewish story,” says Kean. “We want to bring in other communities that have been marginalized, to bring people together to discuss contemporary issues. Having a 200-person theater allows us to do a lot of public programming.”

Of the $45 million needed to complete the project, $22 million has already been raised as part of a capital campaign. The lead gift (its amount undisclosed) came from the Cayton Goldrich family, descendants of the late Jona Goldrich, a Holocaust survivor from Poland who was a key supporter of the museum. The museum’s new campus will bear his name.

Groundbreaking is expected to take place next year.

Denial of responsibility! TechiLive.in is an automatic aggregator around the global media. All the content are available free on Internet. We have just arranged it in one platform for educational purpose only. In each content, the hyperlink to the primary source is specified. All trademarks belong to their rightful owners, all materials to their authors. If you are the owner of the content and do not want us to publish your materials on our website, please contact us by email – [email protected]. The content will be deleted within 24 hours.
Belzbergchangeentertainment newsEntertainment updateexpansionHagyHolocaustLas
Share