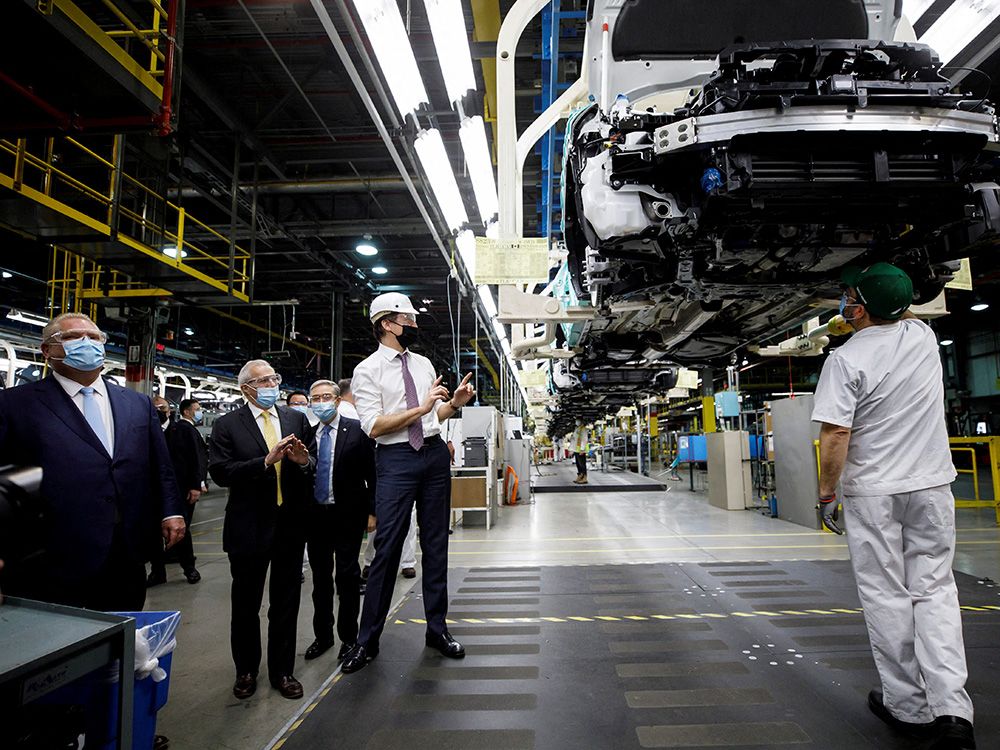 To the surprise of some, if not many, all five of the global automakers who assemble cars and trucks in Canada have committed to making electric vehicles and hybrids here — or “the cars of the future” in the words of federal industry minister François-Philippe Champagne.

The promises required billions of dollars of enticement from the federal and Ontario governments, but there’s no denying that the decision of Stellantis NV to retool its manufacturing operations in Windsor and Brampton to produce EV’s and hybrids signalled a change in the weather for Canada, a relatively high-cost producer which for decades has been losing auto investments to the southern United States and Mexico.

Stellantis, the Amsterdam-based company formerly know as Fiat-Chrysler; General Motors Co.; Toyota Motor Corp.; Ford Motor Co.; and Honda Motor Co. Ltd. have all pledged to make Canada an important node in their North American supply chains. That’s a victory for Champagne, who was tasked by Prime Minister Justin Trudeau with supporting the “economic growth and recovery of Canada’s traditionally strong industries,” including automotive, “to increase productivity and innovation, and to strengthen the manufacturing base of Canada.”

A wobbly manufacturing base has been strengthened. Now, Champagne is keen to expand it.

“We have renewed the mandates of the automakers in Canada … (but) I’m not going to stop,” Champagne said in an interview ahead of a trip to Europe this week. “I’m talking to the Germans. This summer, I’m going to be in Japan. I’ll be in Korea, (talking to executives) both on the battery and the car manufacturers, to say, ‘(Canada) can be part of the solution and I think it would be in your interest to listen to what we have to offer because we’re going to lead in this green industrial transformation.”

Such optimism will come as a relief to the estimated 500,000 Canadians whose employment the government says is directly or indirectly tied to automobile manufacturing. Alas, stability didn’t come cheap: the federal and Ontario governments have committed to giving automakers billions of dollars in subsidies, incentives, and loans to help shoulder the costs of the EV transition.

In Quebec, the province and the federal government have added hundreds of millions of dollars to help foster the fledgling sector, led by Lion Electric Co., a homegrown maker of buses and trucks that went public last year.

The transition to zero-emission vehicles lies at the heart of the federal Liberals’ strategy to cut emissions to net-zero by 2050. It is also key to Trudeau’s industrial strategy to foster long-term economic growth. For the first time in decades, automakers around the world are revamping their supply chains, as the most valuable sub-component in a vehicle is set to become a battery instead of an engine.

Champagne contends that any investments now will anchor more investments in the future. That’s why his government is so willing to throw hundreds of millions of dollars at profitable companies: it’s now or never.

“I’ve never seen so much interest,” said Champagne, adding, “So what it tells me is that we are able to attract these investments … and it’s just a matter of making sure that we make the case for Canada.”

So far, the government has ensured that Canada will at least maintain its auto sector, but whether or not it can significantly expand remains an open question. That’s why Champagne said he’s cold-called companies and dropped in on board meetings so he could pitch executives to invest in Canada. While in Europe, Champagne said he plans to meet with executives from three legendary carmakers that have mostly shunned Canada: Volkswagen AG, Mercedes-Benz Group AG, and Bayerische Motoren Werke AG.

Whether this strategy pays off will take years to determine, but there are billions of dollar at stake.

Since 2018, for example, the five automakers with factories in Canada have announced $16.75 billion in new investments in Ontario and Quebec.

In Ontario, where the vast majority of vehicle makers reside, the federal and provincial governments have each disclosed at least $1.3 billion in spending to encourage automakers to spend there.

Neither government disclosed its spending on the biggest project — Stellantis’s and South Korea-based LG Energy Solution’s $5-billion battery-cell plant in Windsor. Officials said they didn’t want to compromise future negotiations with other automakers. However, in a subsequently deleted tweet, Liberal member of Parliament Julie Dabrusin of Toronto tweeted that the federal government would contribute $500 million and Ontario Premier Doug Ford confirmed it was in “the hundreds of millions of dollars.”

The spending dates back at least four years, to May 2018, when the federal government and Ontario each announced $110 million for Toyota to upgrade two factories to produce hybrid electric vehicles, which Trudeau estimated at the time would cut some emissions by 10 per cent.

Several months later, in October, General Motors announced it would close its century-old plant in Oshawa, as part of a global reorganization that led to nearly 3,000 job losses.

It marked yet one more hit in the slow decline of Canada’s auto sector, which witnessed employment shrink by a third between 2000 and 2012, according to Statistics Canada. Meanwhile, auto manufacturing in Mexico has surged. In 1994, the year that the North American Free Trade Agreement was signed, Mexico produced fewer than 20,000 vehicles per year; by 2016, it was making more 120,000 vehicles.

In 2015, while speaking in Toronto, the late Sergio Marchionne, chief executive of Fiat Chrysler, which would be renamed Stellantis, complained that Canada was too expensive to be competitive.

“I think you need to create the conditions to be competitive,” said Marchionne, who died in 2018.

Within years of Marchionne’s remarks, the momentum in Canada’s auto sector started shifting. About two years after the Oshawa closure announcement, in October 2020, the federal and Ontario governments pledged $295 million apiece to Ford to retrofit an Oakville plant for electric vehicle assembly.

In 2021, the federal and Quebec governments announced $50 million apiece to support St. Jerome-based Lion Electric, which makes yellow school buses and trucks, in a $185-million battery assembly plant. The federal government also put up $15 million for Nova Bus, a division of Volvo AB, for research on zero-emission transit buses.

There were also twin announcements that General Motors and BASF would each build a roughly $500-million plant in Becancour, a port city in Quebec, to manufacture cathodes — one of the most valuable parts of the battery.

Taken as a package, the new investments preserve — and may even expand — Canada’s auto industry, Champagne said they will lead to hundreds of millions of dollars in research and development in the country.

I never win on the money. Where I win is on the talent, on the ecosystem, on the stability, the proximity to resources

The most recent federal budget included $1.5 billion for the government’s net-zero accelerator fund, meant to help companies decarbonize. But that fund could be used to help many sectors, in addition to the auto sector, which means it’s unclear how much more money the government can spend to entice auto sector investment in Canada.

Some experts say that the subsidies may be necessary to attract investment in an EV supply chain given the magnitude of the transformation for the auto industry.

Sebastian Koper, a principal at the consulting firm Roland Berger, which advises governments and corporations, said the challenge of building a new supply chain is that so much investment is dependent on other investments: It’s difficult to build a mine without processing facilities, but no one wants to build processing facilities until the next stage of the supply chain exists.

“There is still uncertainty because an (automaker) can’t do it all on their own,” said Koper. “They have to be one of the first participants and kind of create these aspirational goals, but they certainly can’t do it alone because they need an ecosystem of partners.”

The ecosystem includes mining and a source of raw materials unique to the EV industry, industrial processing capacity of those raw materials, and also federal policies to help incentivize the transition, which at least initially will be costly, Koper said.

The transition raises other questions. Much of the argument for the auto sector is that it is a form of advanced manufacturing that can lead to other innovative and technological breakthroughs that power the economy. But now many automakers, for the first time, are outsourcing or partnering with other companies to produce the battery, the most valuable subcomponent in a vehicle.

Kenneth Gillingham, an economist at Yale University who studies energy and transportation, said that if the automakers do not participate in the battery research and development, and the advanced manufacturing side of automobiles, they risk becoming a “low-margin producer of a commodified good.”

But EVs are critical to limiting climate change, he said.

“The best way to think about the challenge of reaching a net-zero economy is if you don’t find a way to reduce the carbon emissions coming from transportation, you’re really pretty stuck,” said Gillingham. “And electric vehicles are very promising in providing a real pathway that would allow us to have minimal emissions from transportation.”

But there are still challenges in reducing carbon emissions embedded in the EV supply chain — from mining the raw materials, processing, and the emissions produced during other manufacturing. That’s why Champagne said his government has been investing in low-carbon industry, helping steel and aluminum decarbonize in addition to other sectors.

“There’s a lot of challenges on supply chains, on security, on cost of energy, renewable energy,” Champagne said, ”and I think that plays to Canada’s competitive advantages.”

Denial of responsibility! TechiLive.in is an automatic aggregator around the global media. All the content are available free on Internet. We have just arranged it in one platform for educational purpose only. In each content, the hyperlink to the primary source is specified. All trademarks belong to their rightful owners, all materials to their authors. If you are the owner of the content and do not want us to publish your materials on our website, please contact us by email – [email protected]. The content will be deleted within 24 hours.
business newsBusiness updateBuyCanadaFactoryfloorhopesnews update
Share