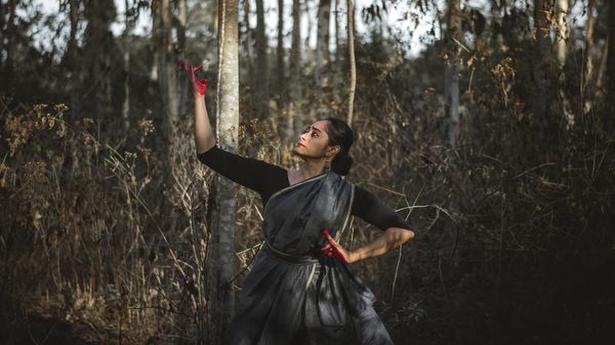 How dancer Anuradha Venkataraman interpreted Dante through the ‘Mahabharata’

When dancer Anuradha Venkataraman opted for a residency program with Instabili Vaganti, an Italian theatre company, she would have never expected that it would one day give her a chance to interpret one of Dante’s classics through the Mahabharata.

A classical dancer for almost 25 years, Bengaluru-based Anuradha Venkataraman had been looking at ways to expand on language of Bharatanatyam for years… “to go beyond the traditional margams.”

In 2015, Anuradha participated in a residency programme hosted by Instabili Vaganti, an Italian theatre company, in India. “It was engaging and I found their thought and work processes fascinating. It was also a good learning experience,” she says.

Post the residency, collaborations with other members continued, eventually taking on a remote video platform due to lockdown; a project called ‘Beyond Borders’ took shape, connecting theatre practitioners, musicians, dancers and other artistes from different countries who had been involved with Instabili Vaganti’s residencies.

“Since the year 2021 marked the 700th death anniversary of Dante, we were looking at his works and some of his poetry resonated with me; I felt an Indian connection to his work,” she says, adding, “I found similarities between the Mahabharata and Dante’s descriptions of the inferno, purgatory and paradise in the Divine Comedy.”

This remote collaboration resulted in VIDEODANTE — a seven-episode web peformance series, each five minutes long. Talking about her role in the project, Anuradha says, “Upcoming episodes will feature my interpretations of Dante’s work through the Mahabharata.”

“For instance, in the second episode, ‘Beatrice’, Dante is trying to cross a river to get to the next rung of Hell. We have a similar concept of a river in Hell called Vaitaraṇi. There is a reference to it in the Mahabharata where the carnage on the battlefield is likened to the Vaitarani river. I have used these verses in ‘Beatrice.’ I have also incorporated verses from the Gita for this project,” she adds.

As ‘VIDEODANTE’ is a remote collaboration, there are segments where movement (dance sequences) comes first and music is added depending on the musician’s response. Music for the project has been composed by Riccardo Nanni; the Italian Cultural Centre in New Delhi will be promoting the episodes as and when they are launched over a period of six months ending June.

The episodes can be viewed as stand alone performances; currently, two episodes — ‘Dark Wood’ and ‘Beatrice’ — have been released.