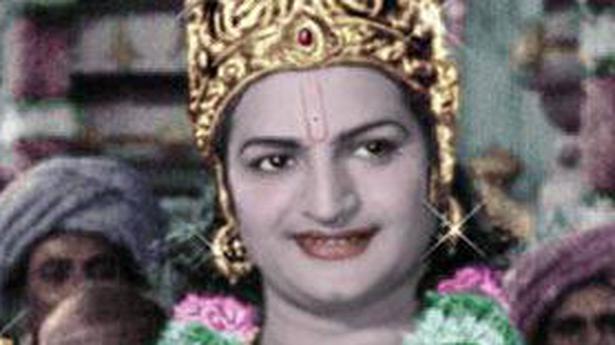 How the Telugu classic, Mayabazar, set a trend

Of all Indian regional cinemas nowhere has the ‘mythological film’ survived the longest as in the cinemas of south India, and especially Telugu cinema, where it was a dominant genre right up to the 1970s. K.V. Reddy’s path-breaking 1957 bilingual, Mayabazar, starring some of the now legendary actors N.T. Rama Rao, Akkineni Nageshwar Rao, S.V. Ranga Rao and Savitri was a welcome change to ‘the mythological template’ in how it humanised the gods for the first time. Its success has since been abundantly repeated. S.S. Rajamouli, one of Telegu cinema’s most popular and influential 21st century filmmakers, calls Mayabazar “the greatest classic and absolute influence of all times, not only on me and my generation of filmmakers, but the entire Telugu film industry.”

Why? After all it’s just another love story from the Mahabharata with a magical premise that has its heroine replaced by a male illusionist demon. Firstly, the film shows how a taut script can work wonders. For a story revolving around the Pandavas and Kauravas with their famed game of dice as its drama trigger, it is impressive how it manages to progress without the presence of the Pandavas. Hence, someone uninitiated into the humongous web of relations in the Mahabharata too can enjoy the film as a standalone, adventurous love story. Secondly, none of its epic characters come with the usual halo that defines their on-screen presence. Even Krishna goes about his machinations discreetly. Their frailties, body language and normal speech of the gods make them relatable and straight-out-of-life, albeit in costume. Thirdly, by choosing a story with tremendous magical moments/ illusion, the film makes best use of the technical advantage of the cinematic medium.

Sasirekha (Savitri), the daughter of Balarama and Revathi, is betrothed to Subhadra and Arjuna’s son Abhimanyu (ANR) in their childhood in the presence of Krishna (NTR) and Rukmini. They grow up nurturing their love. But when misfortune strikes the Pandavas and they lose their kingdom in a game of dice, Revathi is no longer keen to honour the commitment to give her daughter to the son of a prince without a kingdom. When Subhadra comes to Dwaraka to request Sasirekha’s hand for Abhimanyu, Revathi rudely turns her down. Balarama too, tricked by Duryodhana and his uncle Shakuni, agrees to Sasirekha marrying Duryodhana’s son Lakshman Kumar.

That’s when Krishna steps in with a secret plan aided by Abhimanyu’s cousin, the illusionist asura Ghatotkacha, to unite the pining lovers. ‘Mayavi’ Ghatotkacha replaces the real Sasirekha as princess in an illusory palace created by his talented assistants to hold the groom’s party at bay. The real intentions of the Kauravas eventually get exposed amidst hilarious mistaken identities and magical mayhem unleashed by Ghatotkacha under Krishna’s guidance. Finally, the family reconciles.

Though Mayabazar features two of Telegu cinema’s iconic actors, a young ANR and NTR, they don’t get to do much in terms of histrionics. The finesse that NTR lent to his first onscreen Krishna avatar made him an undisputed star of the mythological genre, and he went on to play the character 17 times. S.V. Ranga Rao’s Ghatotkacha stole the limelight with a fine blend of mischief and madness, empathy and bravado.

Savitri as Sasirekha in Maya Bazaar, hand-coloured by ace photographer D.S. Ambu Rao, who was part of the cinematography team under Marcus Bartley.

But the film’s highlight is Savitri’s convincing dual portrayal of a princess and a monster-prince (Ghatotkacha as Sasirekha) that made her one of the most admired actresses of her time. Convincingly portraying shringara and hasya rasas, Savitri interpreted the reactions of male and female genders to similar situations. For students of gender studies, her role is a test case on how behavioural stereotypes of the male and the female define an Indian actor’s interpretation of characters, through the dominant emotions that distinguish, personify and limit a ‘woman-as-woman’ vis-a-vis a ‘man-as-woman’.

Mayabazar also boasted of some of the greatest technicians — from writing to music to camerawork. While Pingali Nagendra Rao’s taut script lends urgency to the action as well as humour, his songs work as integral lyrical scenes that never slow down the narrative. For instance, the elaborate opening song, ‘Ahana pelianta’, works as a fabulous sutradhar while introducing us to the extended Yadava clan, comprising the film’s major characters even while establishing their relationship with the protagonist.

Based on a popular Telugu folktale, ‘Sasirekha Parinayam’, the script seamlessly integrates Andhra customs and traditions into the north Indian Yadava lifestyle. The impact is literally brought home by legendary singer and music director Ghantasala’s songs of the soil set to authentic local instruments.

Even today, the feast song ‘Vivaha bhojanambu’ (Ghatotkacha gorging on choicest south Indian snacks) and the romantic number ‘Lahiri lahiri lahirilo’ continues to be popular. The timeless appeal of the film’s soundtrack is evidenced from the fact that most of its songs have gone on to inspire the names of many Telugu films.

‘Laharilo’ also stands out for prolific and accomplished cinematographer Marcus Bartley’s moonlight effect, which became a trademark of his craft in both indoor and outdoor shoots. His other achievement was the film’s special effects achieved through camera tricks.

Mayabazar is not only a complete entertainer with all the pleasurable navarasas (adbhuta, hasya, veera and shringara), its high artistic standards also celebrate the marvel of movie-making.

Denial of responsibility! TechiLive.in is an automatic aggregator around the global media. All the content are available free on Internet. We have just arranged it in one platform for educational purpose only. In each content, the hyperlink to the primary source is specified. All trademarks belong to their rightful owners, all materials to their authors. If you are the owner of the content and do not want us to publish your materials on our website, please contact us by email – [email protected]. The content will be deleted within 24 hours.
Akkineni Nageshwar Raoclassicentertainment newsEntertainment updateMayabazarN.T. Rama Raonews updateS.V. Ranga Rao
Share

Time For Change: How To Launch A Successful Cultural Transformation Training Strategy For Your Enterprise [eBook]