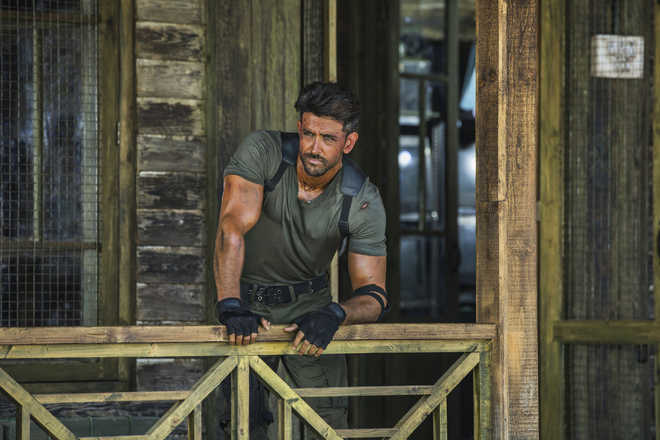 Bollywood star Hrithik Roshan says he was not “excited” when he first read the script of ‘War’ as he thought it was too “frivolous and superficial”.

The high-octane actioner, directed by Siddharth Anand and produced by Aditya Chopra, has completed two years of its release in Hindi cinema on Saturday.

Hrithik reveals his first reaction to the ‘War’ script.

He said: “Well, it’s complicated. When I read the script I didn’t see anything in it that excited me. It was too frivolous and superficial. And I was into ‘real’ cinema like ‘Super 30’ at the time.

“On hearing my reaction both Sid and Adi rushed to my house and it took 5 mins worth of reframing for me to get the film. Adi said look at it as an entertainer like ‘Dhoom: 2’.

“And then we sat and went through the entire script again and I thoroughly enjoyed it. And also realized my folly. Sometimes, it’s important to get how the director wants to interpret the script.

“And having done ‘Bang Bang’ with Sid, I could trust in what they were saying. I saw it as an opportunity for me to try and bring in weight and depth into the film with Kabir’s character which is otherwise not seen in such movies.” “That aspect really excited me. I think the best way to make movies which are ‘not so deep’ is to have characters who are really, really deep. It’s fun then.” ‘War’ tells the story of Kabir, a secret agent, who goes rogue after a mission to catch a terrorist. The film also stars Tiger Shroff and Vaani Kapoor.

Hrithik credits Aditya Chopra and Siddharth Anand for their vision to create the biggest action entertainer India has ever seen.

He says, “I think it’s safe to say that it was the spectacular vision of Sid Anand and Adi Chopra as film-makers who made it what it is today.

“As a contributor, I thoroughly enjoyed being a part of ‘War’ and the response it received only encourages me to follow my gut and work with my whole heart and soul.”

Hrithik has always set new benchmarks for himself and the Indian film industry.

When asked what makes him a genre pushing superstar, he said: “Personally, I’m an adventure junkie and that somewhere spills over to the work I do and the people I associate with. Professionally, I’ve always seen acting as living through the varied stories and onscreen characters I have been lucky to be a part of. My choice of films has been instinctive. I enjoy exploring and immersing myself with different psychologies, personas and experiences.

“The exercise only broadens myself as a human being, makes me more sensitive to my surroundings and people. Every film has shaped me as a being, the journey has been one of learning and unlearning – both of which I truly cherish.

“Yes, there were risks and venturing in unknown waters can be challenging but with it was the thrill. The absolute adrenaline rush I feel with doing things that are new for me. I do not set out to set a precedent for anyone, but myself. That’s what keeps me going.” –IANS

Denial of responsibility! TechiLive.in is an automatic aggregator around the global media. All the content are available free on Internet. We have just arranged it in one platform for educational purpose only. In each content, the hyperlink to the primary source is specified. All trademarks belong to their rightful owners, all materials to their authors. If you are the owner of the content and do not want us to publish your materials on our website, please contact us by email – [email protected]. The content will be deleted within 24 hours.
entertainment newsEntertainment updatefeltfrivolousHrithiknews updatereadRoshan
Share

Scientists Discover a Second Brain in the Gut