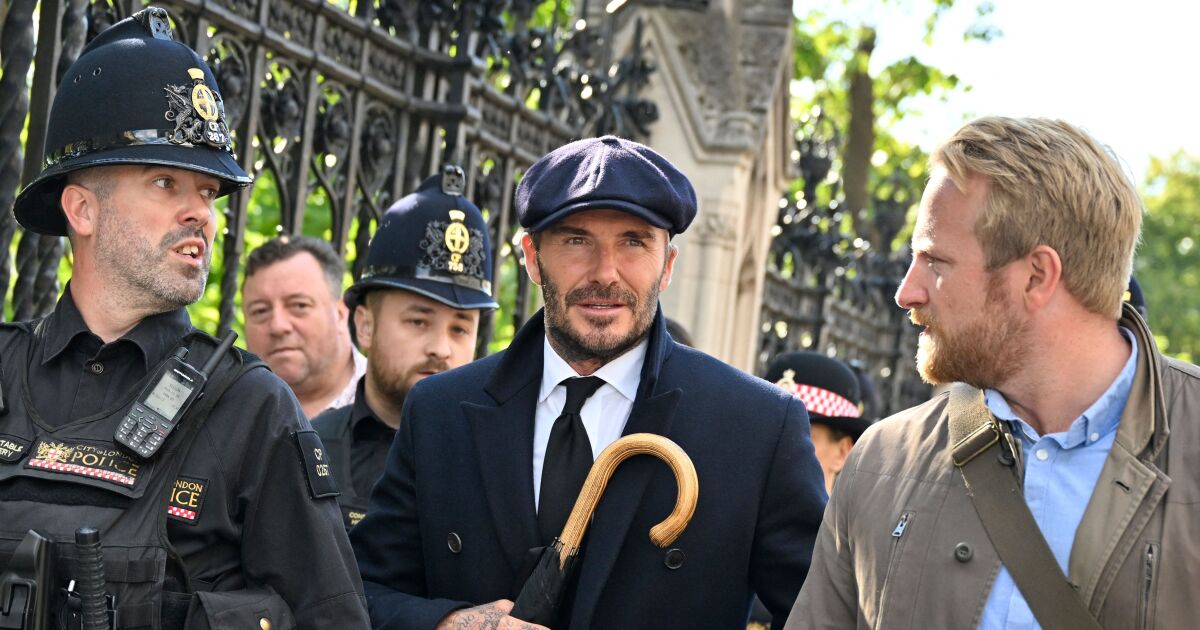 He may be Mr. Posh Spice, but David Beckham didn’t seek any posh treatment when it came time to pay his respects to the late Queen Elizabeth II.

A BBC reporter spotted the soccer legend Friday and interviewed him on video as his part of the line approached the building. The line of mourners has been stretching nearly 5 miles along the River Thames, with waits of up to 24 hours reported.

“We’ve all been celebrating and telling stories,” Beckham said as guards moved his portion of the line along. He and the others around him been waiting for about 12 hours, since 2:15 a.m.

“To be honest, it’s been what we all envisioned,” said the athlete, 47. “We all want to be here together, we all want to experience something where we celebrate the amazing life of our queen.

“I think something like this today is meant to be shared together,” he continued. “So the fact that we’ve been here, we’re eating Pringles, we’re eating Sherbet Lemons, you know, we’re eating sandwiches, having coffee, doughnuts.”

The crowd chuckled as he listed off all the snacks they had shared.

“Big respect to him,” said a woman who was standing near Beckham in the line, which was several people across. “He’s stood with us and he’s paid his respects the way he wanted to. That’s amazing. It’s just been really good.”

Wearing a white shirt and black tie, Beckham bowed briefly to the coffin before moving out of Westminster Hall.

“We have been lucky as a nation to have had someone who has led us the way Her Majesty has led us, for the amount of time, with kindness, with caring and always reassuring,” he told reporters. “I think that’s the one thing that we all felt safe and we will continue that with the royal family. But I think [Her] Majesty was someone special and will be missed, not just by everyone in our country but everyone around the world.”

Beckham also talked to the BBC about when he was named an officer of the Most Excellent Order of the British Empire in June 2003 for his contributions to soccer (known in the U.K., of course, as football).

“To receive my OBE, I took my grandparents with me — who were the ones that really brought me up to be a huge royalist and a fan of the royal family — and obviously I had my wife [Victoria Beckham] there as well,” he said. “To step up, to get my honor — but then also Her Majesty, to ask questions, to talk. I was so lucky that I was able to have a few moments like that in my life, to be around Her Majesty.”

“Today is a very sad day for the entire world,” the former Spice Girl tweeted. “I’m deeply saddened by the passing of our beloved Monarch, Her Majesty The Queen. She will be remembered for her steadfast loyalty and service and my thoughts are with the royal family at this time.”

Queen Elizabeth II’s funeral service starts Monday at 3 a.m. Pacific time at Westminster Abbey, with formalities beginning shortly before that as the coffin is moved from the hall to the abbey.

The Associated Press contributed to this report.

Denial of responsibility! TechiLive.in is an automatic aggregator around the global media. All the content are available free on Internet. We have just arranged it in one platform for educational purpose only. In each content, the hyperlink to the primary source is specified. All trademarks belong to their rightful owners, all materials to their authors. If you are the owner of the content and do not want us to publish your materials on our website, please contact us by email – [email protected]. The content will be deleted within 24 hours.
BeckhamDavidentertainment newsEntertainment updatehourshugeLinenews update
Share