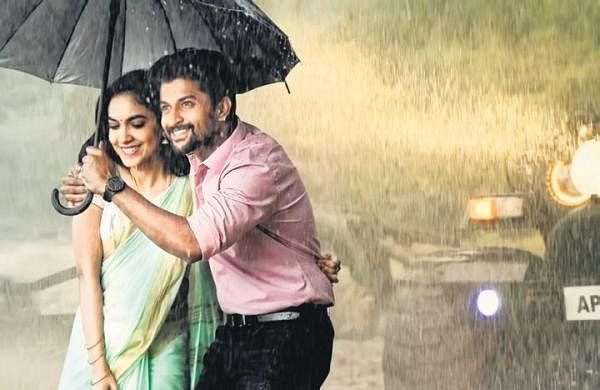 I am in no hurry, says Ritu Varma

Ritu Varma shot to the limelight with Prema Ishq Kaadhal (2013), but it was with Pelli Choopulu (2016) that she walked into the hearts of the viewers. The Hyderabadi girl, who will soon be seen in Tuck Jagadish, a rustic family entertainer, also starring Nani, is confident of the film becoming the biggest blockbuster. For the first time, she plays a small-town girl in the Shiva Nirvana directorial.

“Tuck Jagadish is an out-and-out commercial entertainer that showcases me as Gummadi Varalakshmi, a small-town belle, who works as a village revenue officer. She is confidence personified, chilled out, and continues to stand up for what she believes in. Until now, I never played such a role and it was refreshing to portray this character,” begins Ritu.

The 31-year-old actor is disappointed over Tuck Jagadish not having a theatrical release. “Frankly, I am quite disappointed as every actor wants to see their film in the theatres. I had pinned a lot of hopes on the film. With a lot of uncertainty around, I believe, our producers took the OTT route. In a way, the OTT release looks safe at the moment and it will have a wider reach. I am happy that many people will get to see our work,” she explains.

Ask her if good roles have been elusive for her in Telugu? And pat comes the reply from the vivacious girl. “Post Pelli Choopulu, I haven’t come across too many good stories or scripts. I would say there has been a dearth of those coming my way. I have had offers, but nothing excited me. Of course, I am in no hurry to sign more films and I am choosing my work at ease. With several exciting films up my sleeve, I am happy to sink into my characters and offer versitality to the audience,” shares Ritu.

Reuniting with Nani (with whom she worked in Yevade Subramanyam), Ritu finds that a lot has changed in the five-year span. “I made a brief appearance in Yevade Subramanyam and despite sharing screen space, I did not get an opportunity to speak with Nani a lot. Now, we bonded well and have spent a lot of time working on the sets. He is a self-made star, down-to-earth and humble. I think he was the same person as he was five years ago. I like his choice of films and the way speaks about various issues in life,” explains the Keshava actor.

On working with director Shiva Nirvana, Ritu says, “He is a sensible director and his previous work accentuates my opinion. He does not like over-the-top or overly dramatic scenes. He asks his actors to perform naturally. His films are entertaining and he is good at handling sensitive subjects that depict strong emotions. He has extracted the best out of each and every actor associated with Tuck Jagadish.”

Speaking about her expectations from the film, Ritu explains, “Undoubtedly, this is the biggest film of my career and I sincerely believe that Tuck Jagadish will become my career-defining film.” She has no inhibitions playing glamour roles. “I am open to doing any meaningful role that comes my way. Being an actor, I am here to play all kinds of characters that tap my acting potential,” avers Ritu. Up next, she will be seen in Varudu Kavalenu, Sharwanand’s Telugu-Tamil bilingual Oke Oka Jeevitham and Vikram’s long-delayed film, Dhruva Natchathiram (Tamil). “I am also in talks for an anthology web series for Amazon,” signs off Ritu,

Denial of responsibility! TechiLive.in is an automatic aggregator around the global media. All the content are available free on Internet. We have just arranged it in one platform for educational purpose only. In each content, the hyperlink to the primary source is specified. All trademarks belong to their rightful owners, all materials to their authors. If you are the owner of the content and do not want us to publish your materials on our website, please contact us by email – [email protected]. The content will be deleted within 24 hours.
Loading...
entertainment newsEntertainment updatehurryNaninews updateRituRitu VarmaShiva Nirvana
Share

Fed’s Williams hints that bond-buying taper could start even if job gains slow.

Early Symptoms of Huntingtons Disease may Shed Light on Its Treatment