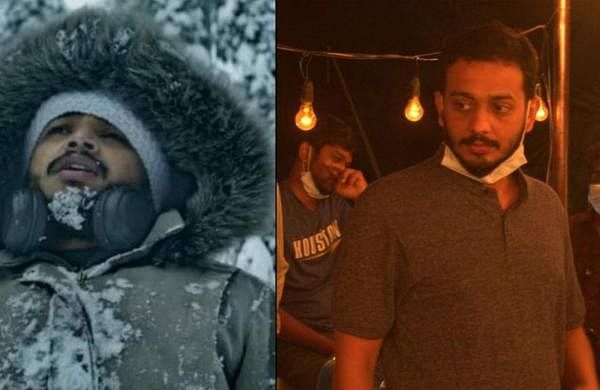 Malayalam cinema witnessed the debut of yet another fresh and original voice through Jan-e-Man director Chidambaram, the brother of one of its actors, Ganapathi. On the surface, the film may have a plot description fit for a short film, but there’s a lot more happening beneath its surface.

With a remarkable balance between laugh-out-loud humour and intense emotions, it has benefitted from excellent word-of-mouth publicity and is running to packed houses in Kerala. Chidambaram tells me that he completed the script in a month and a half. “It was instant noodles for me. I wrote it in last October and started filming by November,” he says.

The writer-filmmaker drew from his own experiences to tell a more “cinematic, exaggerated” story. “I was celebrating my 30th birthday in Thiruvananthapuram with my schoolmates, and we found out that an old lady had passed away next door. We were getting a bit noisy, with Antakshari and all that, and we told each other to keep it down. Unlike in the film, there were no decorative lights, though,” he laughs.

Turning a one-line apt for a short film to a full-length feature was quite a task for Chidambaram, who hoped to subtly explore alienation and class and caste differences through the story.

He found much encouragement in producers Ganesh Menon and Lakshmi Warrier, who had previously backed another discussion-worthy film, Vikruthi, starring Soubin Shahir and Suraj Venjaramoodu. “We share a great rapport. They were amiable collaborators and provided me with everything I needed,” he says.

Balancing the comic and emotional elements and the placement of the cuts was worked out in the writing stage itself.

“This method helps one keep track of the interiors, entrances and exits, transition from a room of the first house to that of the second… things like that. We shot it in the written order so the actors could comprehend the progression of the events. We treated everything as though it’s two films in one, each with its distinct style – colours, camera movements and whatnot. Though the COVID protocols made things a bit awkward in the first couple of days, everyone got comfortable after a week or so,” explains Chidambaram.

Being a first-time filmmaker, did he find the single-setting liberating? “I think a single setting is more challenging because we have to ensure that audiences aren’t bored after following the action in the same place for two hours,” he observes.

“We were careful about not getting repetitive anywhere. We played around with different camera angles, sometimes employing lengthy takes to establish the geography and give a sense of the proximity of the two houses. A few suggestions also came from Basil Joseph, who initially had minor concerns about pulling off a story like this,” he said.

On getting Basil, Chidambaram recalls being adamant about having him play the central character, Joymon. “When I first wrote the character, I was thinking of the right person to play him, and I couldn’t think of anyone other than Basil. Since Ganapathi had worked with him in Padayottam, we contacted Basil via the former and told him that Joymon wouldn’t suit anyone else. We narrated the first draft of the script with all the dialogues, and he immediately agreed to get on board,” he said.

Among the many notable aspects of Jan-e-Man is its naturalistic photography, courtesy of debutant Vishnu Thandassery. It’s a far cry from the bright and flashy visual style usually opted in most comedies in the South. Chidambaram, who had worked under esteemed cinematographers such as Rajeev Ravi and KU Mohanan, was particular about keeping it closer to the real world.

“Since this is a story that can take place in any part of the world, we wanted a fresh and realistic texture despite the inclusion of slapstick humour in some places. Vishnu and I had worked together before in the technical departments of a few films, and we were on the same page when it came to the visual style of Jan-e-Man,” he said.

Denial of responsibility! TechiLive.in is an automatic aggregator around the global media. All the content are available free on Internet. We have just arranged it in one platform for educational purpose only. In each content, the hyperlink to the primary source is specified. All trademarks belong to their rightful owners, all materials to their authors. If you are the owner of the content and do not want us to publish your materials on our website, please contact us by email – [email protected]. The content will be deleted within 24 hours.
BasilBasil JosephChidambaramcouldntentertainment newsEntertainment updateGanapathiImagine
Share