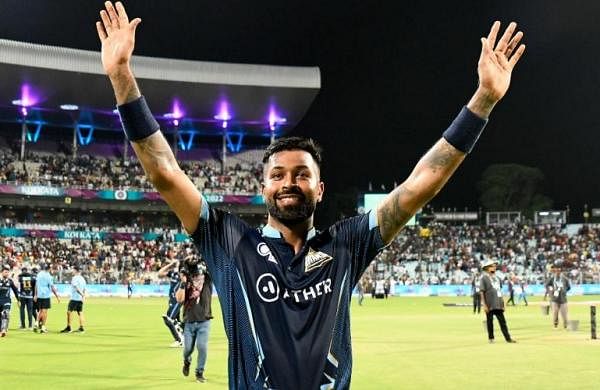 I have started to balance things in my life: Gujarat Titans skipper Hardik Pandya

KOLKATA: A very different Hardik Pandya has come to the fore during this season of IPL and the Gujarat Titans skipper feels he has finally learnt to strike a balance on and off the field.

Under Pandya, Gujarat Titans, a first-time franchise, have reached the final in its inception year, and Pandya’s 453 runs in 15 games and seven wickets have played role, apart from his calm demeanour as the captain.

“I’ve started to balance things in my life. It has been a constant effort through the last couple of years,” Pandya, who was once known for his flamboyant attitude said after the Titans’ comfortable seven-wicket victory over Rajasthan Royals in first qualifier.

“In the end, my family, my son, my wife, and my brother as well have played a big role. They kind of allowed me to get neutral in life. I look forward to go home and spend some time with family, and that’s made me a better cricketer as well,” he added on a pragmatic note.

Pandya said that the feeling of reaching the final will take some time to sink in. “Don’t have much feeling right now. Trying to be neutral (calm) again I’ll say,” he said. It is the dressing room atmosphere and the presence of some great individuals that has brought about this kind of stupendous result.

“All the 23 players are different characters, bring different things to the table. Was saying to Miller as well, if you have good people around you, you get good things. It’s been that story for us. The kind of people we have, the genuine human beings we have…,” he said.

“I genuinely see even the players in the dugout are trying and praying for them to make sure they do well. That is something fantastic and that is the reason we have reached where we have reached. It’s all about making sure we respect this game,” he added.

He was all praise for Rashid Khan, who, once again, had a good day with the ball. “Rash has been fantastic throughout the season and throughout his cricketing journey,” he said. He lavished praise on Miller, who has singlehandedly won at least four games in the tournament so far.

“But I’m proud of Miller – the way we have played. Wherever my team requires me to play, I don’t generally demand where I want to bat. That’s not how I’ve got success,” he concluded.

Rajasthan Royals skipper Sanju Samson was happy with the total that they got but felt that the Eden Gardens strip became better for batting in the second half of the match. “Felt good to put up that kind of total as I felt the wicket was a bit sticky and there was lot of swing in the powerplay. I think we managed to put in a good score, but I think they played really well to chase the score down,” Samson said after the game.

“It was a bit two-paced and bounce was also not even, I just went after the bowling from ball one and I got a bit lucky to get a few runs in the powerplay, but wicket was a bit tough to bat on and we finished off really well,” he said.

“Scoring that kind of a total on this wicket in these conditions, against that bowling attack was a great performance by our batters. We have been doing really well, the five bowlers have been our main bowlers and they have done really well throughout the tournament,” he added.

Samson defended his decision of not using a sixth bowler in Riyan Parag. “Having Riyan also helps, but felt it was a bit better to bat in the second innings as it came on nicely onto the bat. We have been playing some really good cricket throughout the tournament, couple of overs here and there, couple of extra runs, couple of off-rhythm by couple of our bowlers, we will try to come back and play some good cricket. In this format luck (the toss) plays a huge role, so it all comes down to what you want to do in your control. Hoping for a good result in the next game,” he said.

Denial of responsibility! TechiLive.in is an automatic aggregator around the global media. All the content are available free on Internet. We have just arranged it in one platform for educational purpose only. In each content, the hyperlink to the primary source is specified. All trademarks belong to their rightful owners, all materials to their authors. If you are the owner of the content and do not want us to publish your materials on our website, please contact us by email – [email protected]. The content will be deleted within 24 hours.
BalanceGT vs RRGujaratGujarat TitansHardik PandyaIPL 15ipl 2022IPL playoffs
Share

I have started to balance things in my life: Hardik Pandya