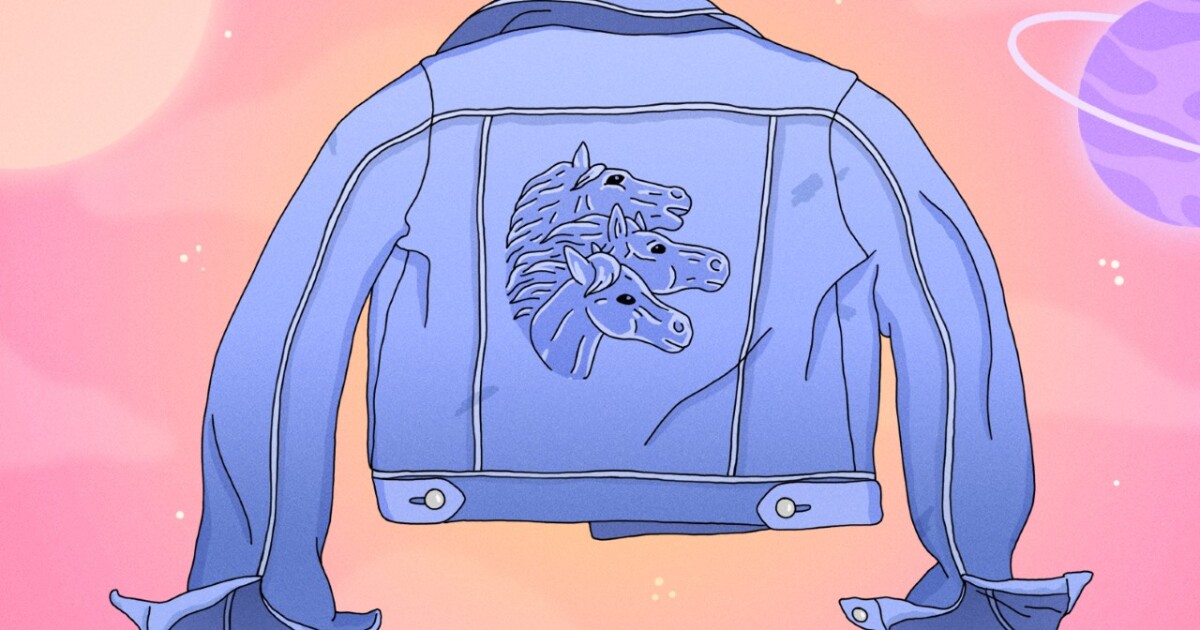 I manifested the perfect jean jacket and the Melrose gods delivered

This story is part of L.A. — We. See. You!, the second issue of Image, which explores various ways of seeing the city for what it is. See the full package here.

There is a day, a Sunday, back in 2019, when I wake up with a single, clear thought: “I need a jean jacket.” I can picture it — oversized and vintage, just tattered enough, maybe with some weird little surprise, an errant bit of embroidery or overdyeing that will make me fall unmistakably in love. This is the only way I acquire clothing now; an item pops to mind, and I do what I can to find it. Something to focus on in a chaotic world.

I head straight to the Melrose Trading Post, get my hand stamped at the gate and walk onto the Fairfax High campus. When you live somewhere for long enough every corner of the city eventually bears the imprint of one of your former selves. I think of my brief stint as an underwear designer in the early 2000s. My friend Pamela and I rented a booth, laid out panties we’d bedazzled and told shoppers that our designs were probably about to be picked up by a “major retailer.” My ever-supportive parents were there too, with takeout from Panda Express.

We were all eating orange chicken when Paris Hilton approached, Razr phone pressed to her ear, and bought a pair with the image of a hundred-dollar bill ironed on the butt. The purchase appeared on Page Six in print and we immediately folded our business. After all, what future undergarment achievements could possibly touch that glittery peak?

Now Paris and I are both totally over rhinestones and I am walking through the parking lot, looking for love. I stop at the first vintage booth, lured by an old denim and corduroy trench, something a detective might wear in an art-house western. It isn’t quite right. I press on and, two vendors later, am rewarded: Hanging among jackets bearing Levi’s, Lee and Wrangler labels, all in various stages of unraveling, is a single, nameless jacket, edges frayed, the perfect worn-in shade of blue. On the back, three giant horse heads are embossed into the denim using some technique I’d never seen before. The jacket is only $35. I swoon.

Though I’ve had perfect denim jackets before, this is the first to activate my truest love language: deep research. It’s those horses, really, the surprising way they’re imprinted into the denim that make me want to know more. Turns out they’re the product of a Massachusetts-based company called Tyca. Initially a contract manufacturer of shoe parts, Tyca got into the denim game to fulfill a request from Levi’s, using the same machinery to emboss the Levi’s name into thousands of back pockets. Soon, Tyca was making custom jackets for places like Graceland and the Alamo.

Search for “embossed denim” and you’ll find an eBay trove of Harley-Davidson swag, of jackets bearing cats and flaming guitars, all with an ‘80s feel and all from Tyca. The style is the brainchild of company founder Franklin Hardy, an affable entrepreneur in the Ben & Jerry tradition, complete with ponytail.

I recently showed Hardy my pack of horses over Zoom and he immediately recognized them. After a look in the company archives, he confirmed they were mold No. 232, engraved on a metal plate by a German artisan who was part of a post-WWII diaspora. The mold was made in 1986, which also happens to be the year both David Lynch’s “Blue Velvet” and Madonna’s “True Blue” were released — clearly a seminal moment for indigo art. The horses were in high demand at western shops, Hardy told me. It was common at the time for ranchers to buy the jackets and add their own insignia. The day we spoke Tyca produced mold No. 11,493.

It’s a strange thing to be both seduced by the romance of the Wild West and largely absent from its mythology. All those forgotten Chinese miners and railroad workers reduced to nameless bit players in history. I can’t resurrect them, but when I go out in the world with this draped over my shoulders — yes, I am sometimes a fan of the reviled, beloved cape drape — I feel gleeful, as if I’ve stolen a bit of a cowboy’s soul.

At the same time there’s something about how oversized the jacket is that makes it an effortless carapace, offering just the right amount of protection for this strange era in which the ground is constantly shifting and the air itself might carry danger.

None of my other denim jackets have felt as necessary as my Hardy’s horses. There was the sheepskin-lined one I had to return to an ex. He claimed it had belonged to his grandfather, and how can you challenge a story like that? There was the one with a cryptic ‘50s French decal that I bought in a sleepy upstate New York church charity store and left hanging on a gilt chair in a chaotic dim sum emporium in Alhambra.

And most recently there was the one lined with buffalo check flannel. I paid $15 for it, reduced from $20, because the cashier thought it smelled too bad not to give me a discount. The stubborn stench of its previous owner clung through four washings and a vinegar soak, but after the fifth wash it took on a permanent fresh laundry scent. Actually, I don’t know if it’s permanent because I parted ways with that jacket in 2017, when it was stolen from my car in San Francisco. Each one beloved in their moment, each one lost.

Maybe it’s tempting fate to say so, but I feel like this one will stay. There have been omens. When I tried it on at the Melrose Trading Post, there was a young, Mandarin Chinese-speaking woman in the same booth wearing an enviable pair of Feiyue high-tops. She inveigled me into promising to promote a new proverb she claimed to have invented: “We turn into the stories we tell ourselves.”

Then last week, I reached into the top pockets of my jacket, thinking maybe I’d find some note left behind by the previous owner, and discovered my own forgotten relic instead. It was a scrap of paper from a party I went to on the first day of 2020. We’d played a fortune-telling game where each person wrote a question on one side and the beginning of a sentence on the other. Then, Exquisite Corpse-style, someone else completed it without looking at the question. On one side I asked: “What will make us happiest [this] year?” On the other: “We will be …”

To which some prescient person had responded: “… transformed in unexpected ways.”

Jade Chang is the author of “The Wangs vs. the World” and the forthcoming Audible Original “You’ve Already Changed Your Life.”

More from issue 2 of Image

Loading...
Denial of responsibility! TechiLive.in is an automatic aggregator around the global media. All the content are available free on Internet. We have just arranged it in one platform for educational purpose only. In each content, the hyperlink to the primary source is specified. All trademarks belong to their rightful owners, all materials to their authors. If you are the owner of the content and do not want us to publish your materials on our website, please contact us by email – [email protected]. The content will be deleted within 24 hours.
DeliveredGodsjacketJeanlifestyle newslifestyle updatemanifestedMelrose
0
Share