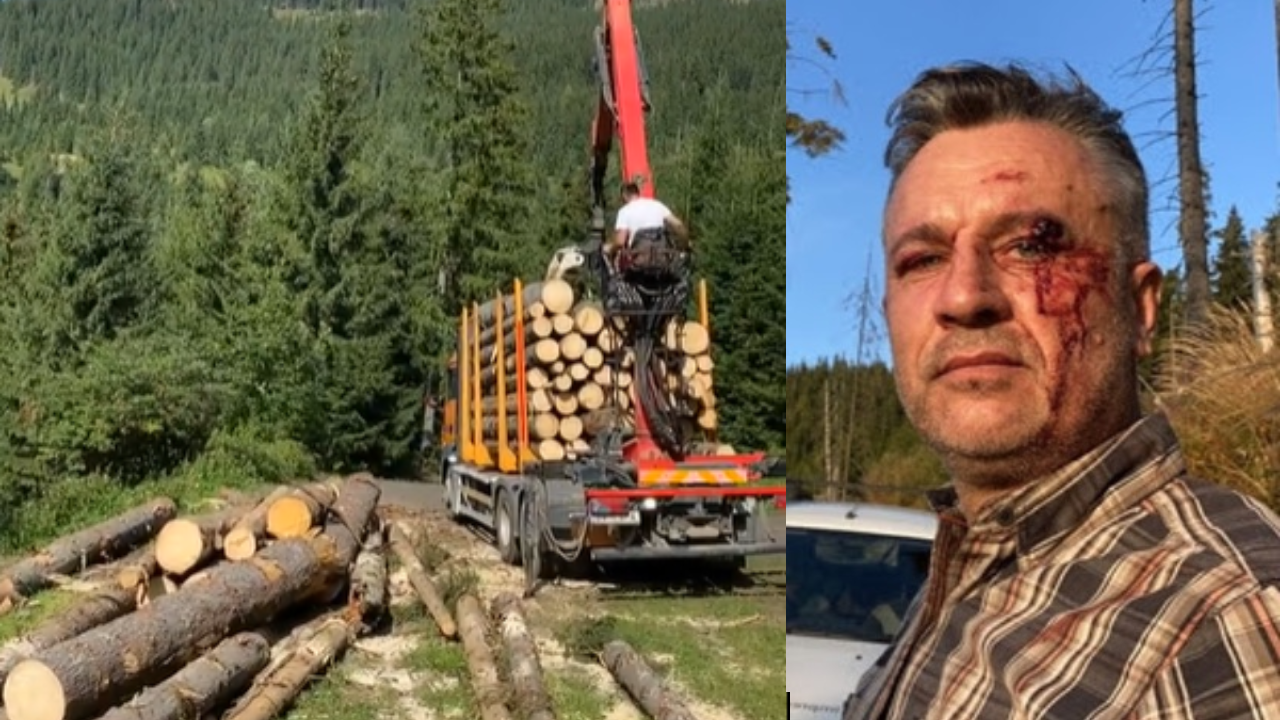 ‘I was afraid we would die’: Attack highlights violence of Romania’s ‘wood mafia’

On September 16, 2021, two journalists and an environmental activist were beaten by some 20 attackers in Romania’s northeastern Suceava County while filming a documentary about illegal logging. It is the latest incident in a long history of violence in Romania’s primeval forests, which have become an unlikely battleground between illegal loggers and those trying to protect one of the world’s most ancient ecosystems.

The Observers team spoke to the three victims of the attack – the journalists Mihai Dragolea and Radu Constantin Mocanu, as well as the activist Tiberiu Bosutar, who was helping them track down environmental crimes in the region for their documentary.

The team travelled to a specific section of the forest after a villager reported unusual activities to Bosutar on Facebook, where the activist regularly shares live feeds of illicit deforestation.

‘About 20 people armed with axes and bats […] began attacking us’

Bosutar is one of many environmental activists who posts videos of illegal logging practices on social media, in order to gather enough proof to report the infractions to the police.

Romanians have lost trust in state authorities [regarding logging], so I end up receiving hundreds of messages every day about illegal logging. As much as possible, I will try and go to the field to document the cases, so that when I call the authorities, they can no longer hide the truth. There is proof of what is happening.


On September 14, I received a message about a logging operation that was suspected to be illegal. At the time, I was joined by two journalists working on a documentary about illegal deforestation, so we decided that two days later, we would go to the area to investigate.

We arrived at the section of the forest on September 16 at around 2:30pm, and about half an hour later, about 20 people armed with axes and bats arrived and, before long, they began attacking us.

Mihai Dragolea talked us through what happened next.

The men began shouting at us, telling us to stop the camera and ran towards us very quickly. We all jumped into the car but didn’t get a chance to start it.

Before we knew it, they began hitting Tiberiu, and Radu was pulled out of the car. I was then pulled out as well and was punched hard in the jaw. I was afraid that if we didn’t call the police, we would die right there and then.

I threw myself into a ravine and called 112 [the police]. I asked them to arrive with sirens so that the attackers would hear and leave. About 30 minutes later, the police arrived and luckily they caught some of the attackers, who had stripped Tiberiu naked and kicked him. Radu had completely lost consciousness and had been punched in the mouth.

All of our footage was deleted and our equipment destroyed by the attackers. If it’s worth acting like an organised mob towards journalists and activists, it means there is a lot to lose and there is a lot of money involved.

The attackers are now all free. I believe that judicial supervision has been issued so they can’t leave the area. But no one has been placed under arrest.

Mihai’s colleague, Radu Constantin Mocanu, told us that he couldn’t remember what happened as he experienced a concussion as a result of the attack. He only remembers waking up the next day in hospital, with a “busted lip, blood on [his] clothes and a headache”.

Our Observers are not the only ones to have been attacked while trying to save Romania’s trees. In recent years, six foresters have been killed, while 650 have been beaten, attacked with axes and knives, or even shot at after catching illegal loggers in the act, according to Romania’s Forestry Union. In 2019, the killing of two forest rangers trying to protect the country’s forests against the “wood mafia” sparked national and international outrage.

The rise of the ‘Wood Mafia’

The so-called “wood mafia” has been ravaging Romania’s forests for decades. In 2019, leaked data from a 10-year government report revealed that every year, 38 million cubic metres of wood are extracted from the country’s forests – around half of which is the result of illegal logging.

Logging is illegal when the wood is taken from areas that are supposed to be protected, or harvested in such great quantities that quotas are breached and entire forests simply disappear. Timber that is logged illegally is free of taxes, which pushes down timber’s market price, offering an incentive for other illegal loggers.

Since the fall of communism in 1989, foreign timber companies have been rushing to Romania’s forests to take advantage of the timber resources. These include HS Timber, formerly known as Austrian Holzindustrie Schweighofer, which has supplied wood to major European companies, including Ikea. In 2015, the Environmental Investigation Agency released a report that revealed the existence of covert video recordings of a Schweighofer official admitting to buying illegal wood and even offering bonuses for suppliers of illicit timber. The company has denied the allegations, despite the evidence.

According to Mihai Dragolea, the rise of the “wood mafia” accelerated when Romania joined the EU, and has been facilitated by the Romanian government, which has a reputation for corruption, which it has struggled to shake off since coming to power 30 years ago.

Romania is a weak state with lots of corruption. Thanks to the communist system of forest management, Romania enjoys forest surpluses and species that have a high economic value. But since Romania joined the EU in 2007, when it began opening up its economy to international markets, the demand pressure on our forests has soared.


We can no longer say that we have the poverty we experienced in the ’90s, but we have become victims of consumer culture and capitalist success models. Therefore, in rural areas such as Suceava, organised crime structures have developed.

These mafia groups take advantage of any vulnerable resources – like nature. So they cut, because there is lots of money involved in illegal logging. In many cases, the government is complicit in the destruction of our forests. They know what is happening but turn a blind eye to it.

‘Since the EU decided to take action, logging in many areas has intensified’

Last year, the European Commission began infringement procedures against Romania for failing to effectively protect its forests and for not respecting EU legislation in protected Natura 2000 sites, a network of protected areas covering Europe’s most valuable and threatened species and habitats.

For many, this was seen as a step in the right direction. However, according to an activist who has asked to remain anonymous, EU regulations have not helped reduce illegal logging – quite the opposite.

Since the EU decided to take action, logging in many areas has intensified. It has had the opposite effect. When the EU announced it would take action, illegal loggers went into a logging frenzy. They tried to log as much as possible before the restrictions came into place.

EU regulations need to be implemented, but alongside stricter national policies as well. If not, we will not see any change. As long as people get away with illegal logging, they will keep doing it as there is so much money involved and people aren’t getting condemned for their actions.

Romania is home to more than half of Europe’s last remaining old-growth and virgin forests, which are valuable ecosystems inhabited by diverse wildlife. The trees are unique and absorb 70% more carbon than logged forests.

Despite the backdrop of violence in these woodlands, forest campaigners are continuing the fight. Our Observers told us that the attack would not deter them from speaking out and raising the alarm on what is left of Europe’s last great forests in the hope of saving them before it’s too late.

Denial of responsibility! TechiLive.in is an automatic aggregator around the global media. All the content are available free on Internet. We have just arranged it in one platform for educational purpose only. In each content, the hyperlink to the primary source is specified. All trademarks belong to their rightful owners, all materials to their authors. If you are the owner of the content and do not want us to publish your materials on our website, please contact us by email – [email protected]. The content will be deleted within 24 hours.
afraidattackcorruptiondieenvironmentEuropeHealth newsHealth update
Share

Radhika Madan, in a white embroidered lehenga, looks right out of a fairytale