Notice: amp_is_available was called incorrectly. `amp_is_available()` (or `amp_is_request()`, formerly `is_amp_endpoint()`) was called too early and so it will not work properly. WordPress is currently doing the `pre_get_posts` hook. Calling this function before the `wp` action means it will not have access to `WP_Query` and the queried object to determine if it is an AMP response, thus neither the `amp_skip_post()` filter nor the AMP enabled toggle will be considered. It appears the theme with slug `publisher` is responsible; please contact the author. Please see Debugging in WordPress for more information. (This message was added in version 2.0.0.) in /home/runcloud/webapps/techilive/wp-includes/functions.php on line 5313
 ICC World Test Championship final: Virat Kohli says India 'on equal terms’ with New Zealand ahead of marquee clash - Firstcricket News, Firstpost - TechiLive.in 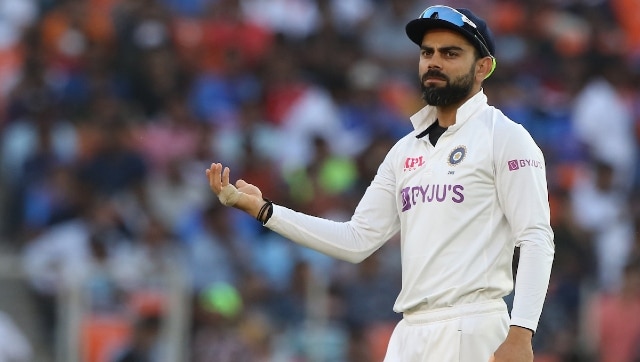 India captain Virat Kohli played down the chatter of New Zealand being the better prepared side in the ICC World Test Championship final given similarities between their home conditions and the one in England, where the match is to take place.

Kohli, accompanied by head coach Ravi Shastri, addressed reporters ahead of the squad’s flight to the United Kingdom, where the side will play the ICC WTC final followed by a five-match Test series against England, the two events separated by a gap exceeding a month.

New Zealand head to the final, which will be played at Southampton’s Rose Bowl starting 18 June with more match practice as they are currently facing hosts England in a two-match Test series that got underway at the Lord’s Cricket Ground on Wednesday.

“Conditions are as potent for New Zealand as they are for us. Australian conditions should have favoured Australia, but we beat them twice in two series. So, it’s how you look at a situation. If you want us to board the flight from here feeling like New Zealand’s got the edge, then there’s no point taking that flight.

“We are going to board that flight knowing that we are on equal terms, and whichever team performs well session-by-session, hour-by-hour is going to win that championship, and we have no doubts on that,” said Kohli in the virtual interaction with the press.

Kohli also didn’t agree with the notion that India were going into the series without much practice, insisting on developing a positive frame of mind going into the contest that according to him, wasn’t necessarily dependent on the number of practice games or the level of acclimatisation to the local conditions.

“In the past, we’ve landed in places three days prior even in a proper schedule and have had a hell of a series and hell of a competition. So, I think it’s all in the head. It’s how you look at the situation currently. It’s not the first time we’re playing in England. We all know what the conditions are like.

“Even if you’re used to the conditions, if you don’t enter the field in the right frame of mind, you’re going to nick the first ball or you’re going to find it difficult to pick wickets. I think the hunger to be there and the desire to play the finals…we don’t have any issues even with four practice sessions heading into the game because we are absolutely sure what we can do as a team and we all have played in England before as well, whether it’s with the Indian team or India A as well.

“We’re not bothered by that at all, and we just want to get there and make the most of the opportunity at hand,” said Kohli, who happens to be India’s most successful Test skipper of all time.

India head to the World Test Championship on the back of consecutive Test series victories, having defeated a full-strength Australia in their backyard 2-1 despite several key Indian players suffering from injuries. India then hosted England in a four-match series at home, losing the first game in Chennai by 227 runs before staging a remarkable comeback to hammer the visitors in each of the next three Tests, thereby sealing their qualification for the WTC final at the expense of England and Australia.

Kohli also welcomed the long gap between the World Test Championship final, which gets done by 22 June unless the Reserve Day is to be utilised, and the England Test series that begins with the first game at Trent Bridge on 4 August. The India captain, who turns 33 this November, described the long break as an opportunity for the team to ‘refresh and restructure’ while citing the example of their recent tour of Australia, which was also a long stay from late November to mid-January where the players were granted the opportunity to venture out of their bio-secure bubble on a few occasions.

“Like in Australia, if we had to compete inside a bubble for that long a period of time through the whole tour, would’ve been very, very tough. The fact that we had a little bit of freedom to go out and just access the kind of things that the locals were… gave us a bit more space and a bit more time to reset and refresh.

“So I think it’s absolutely fine, it will give us time to regroup as a side and prepare again for a long series, and that kind of setup is very important before you go into a lengthy series and we know that playing five Tests in England can be very challenging. So we want to have the most amount of time before that series to setup for those five games and just be in that zone from thereafter,” he added.

Meanwhile, coach Shastri batted for an expansion of the ICC World Test Championship final, saying a three-match series would be a better way to culminate a tournament that runs for a cycle of two years, instead of the one-off game that will decide the winner of the inaugural edition, which started with the 2019 Ashes that ended in a 2-2 stalemate between hosts England and Australia, who retained the urn.

“I think ideally in the long run, if they want to pursue with this Test Championship, a best-of-three final would be ideal. Three-match series as a culmination of two-and-a-half years of cricket around the globe. But, we’ve got to finish it as quickly as possible because of the FTP that will start all over again. So one-off is a one-off and the guys have earned their stripes,” said Shastri, a former India captain who also had a successful stint as a commentator before taking over as the men’s head coach.

Shastri will be with the first-choice Indian team that will be playing the Tests in England, while another Indian international side, which features senior players such as Shikhar Dhawan and Hardik Pandya, will travel to Sri Lanka for a limited-overs tour with batting legend Rahul Dravid set to accompany as the head coach for that particular assignment. While a country getting represented simultaneously by two different sets of players is a rare event in sport, let alone cricket, and is a product of the current circumstances with the global COVID-19 pandemic still making travel from one nation to another tricky, Shastri feels the concept could be the way forward in helping the sport expand globally, especially in the shorter formats.

“You never know. At the moment it’s happening because of the current situations and restrictions in travel and things of that sort. In the future, if you want to expand the game, especially in the shorter formats of the game, then it could be the way to go. Why not? When you have that much volume of cricketers and if you want to spread the T20 game across the globe, that could be the way ahead because if you’re talking of Olympics in four years or eight years’ time, then you need more countries to play the game. So that could be a way forward,” said Shastri.

The Indian contingent board the flight to the United Kingdom after completing a 14-day quarantine period in India, and will be serving another period of “managed isolation” once they check into the hotel adjoining the venue in Southampton, according to the ICC though they didn’t mention exactly how long the period of isolation would be.

The men’s team travels along with the women’s side that will play a one-off Test — their first in seven years — followed by three ODIs and as many T20Is. The BCCI had earlier arranged for players from both the men’s and women’s squads to be ferried to Mumbai from various parts of the country via charter flights.

Denial of responsibility! TechiLive.in is an automatic aggregator around the global media. All the content are available free on Internet. We have just arranged it in one platform for educational purpose only. In each content, the hyperlink to the primary source is specified. All trademarks belong to their rightful owners, all materials to their authors. If you are the owner of the content and do not want us to publish your materials on our website, please contact us by email – admin@techilive.in. The content will be deleted within 24 hours.
aheadChampionshipClashEqualFinalFirstcricketFirstpostICC
0
Share

How to get a crown on TikTok