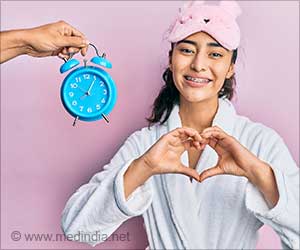 Ideal Sleep Timing to Curtail the Risk of Heart Diseases

is an important aspect of one’s life that is regulated by the body’s circadian rhythm/biological clock. Sleep plays a vital role in

by healing and repairing various organs like the heart, brain, and blood vessels.

Our biological or circadian clock is responsible for synchronizing almost all our body’s natural rhythms of light and dark. Disrupting this clock might bring all the process to a halt including cardiovascular health.

Various studies have explored the association between the duration of sleep and cardiovascular disease.

However, the link between sleep timing and heart disease remains underexplored. The present study thus studied this relationship between objectively measured sleep onset (rather than self-reported) in adults.

The team used a wrist-worn accelerometer to collect the data on sleep onset and waking up time over seven days. Other details related to their lifestyle, demographics, health, and physical assessments were obtained.

The participants were further followed up to screen for any new diagnosis of cardiovascular diseases like heart failure, heart attack, chronic ischemic heart disease, transient ischemic attack, and stroke.

It was found that nearly 3,172 participants (3.6%) of total participants had developed cardiovascular disease during the follow-up of 5.7 years.

When compared to participants who went to sleep onset from 10:00 to 10:59 pm, the following was found:

“Our study indicates that the optimum time to go to sleep is at a specific point in the body’s 24-hour cycle and deviations may be detrimental to health. The riskiest time was after midnight, potentially because it may reduce the likelihood of seeing morning light, which resets the body clock,” says Dr. Plans.

The study team stated that the exact reason for a stronger relationship between sleep onset and cardiovascular disease in women was not clear.

“It may be that there is a sex difference in how the endocrine system responds to a disruption in circadian rhythm. Alternatively, the older age of study participants could be a confounding factor since women’s cardiovascular risk increases post-menopause – meaning there may be no difference in the strength of the association between women and men,” says Dr. Plans.

The study further states that although there was no causal aspect obtained for delayed sleep as the potential cardiac risk factor, good sleep was strongly linked to better health.

Further validation through future studies may thereby help reinforce the benefits of basic sleep hygiene and timing as a low-cost intervention to reduce the risk of heart diseases.

Denial of responsibility! TechiLive.in is an automatic aggregator around the global media. All the content are available free on Internet. We have just arranged it in one platform for educational purpose only. In each content, the hyperlink to the primary source is specified. All trademarks belong to their rightful owners, all materials to their authors. If you are the owner of the content and do not want us to publish your materials on our website, please contact us by email – [email protected]. The content will be deleted within 24 hours.
cardiovascular diseasesCurtailDiseasesHealth newsHealth updateHeartheart attackheart disease
Share

Janhvi Kapoor’s rumoured ex Shikhar Pahariya reacts as she poses with Khushi Kapoor in Dubai, zooms off on ATV ride