Notice: amp_is_available was called incorrectly. `amp_is_available()` (or `amp_is_request()`, formerly `is_amp_endpoint()`) was called too early and so it will not work properly. WordPress is currently doing the `pre_get_posts` hook. Calling this function before the `wp` action means it will not have access to `WP_Query` and the queried object to determine if it is an AMP response, thus neither the `amp_skip_post()` filter nor the AMP enabled toggle will be considered. It appears the theme with slug `publisher` is responsible; please contact the author. Please see Debugging in WordPress for more information. (This message was added in version 2.0.0.) in /home/runcloud/webapps/techilive/wp-includes/functions.php on line 5313
 If You Think You Know What a Fern Is, Think Again - TechiLive.in 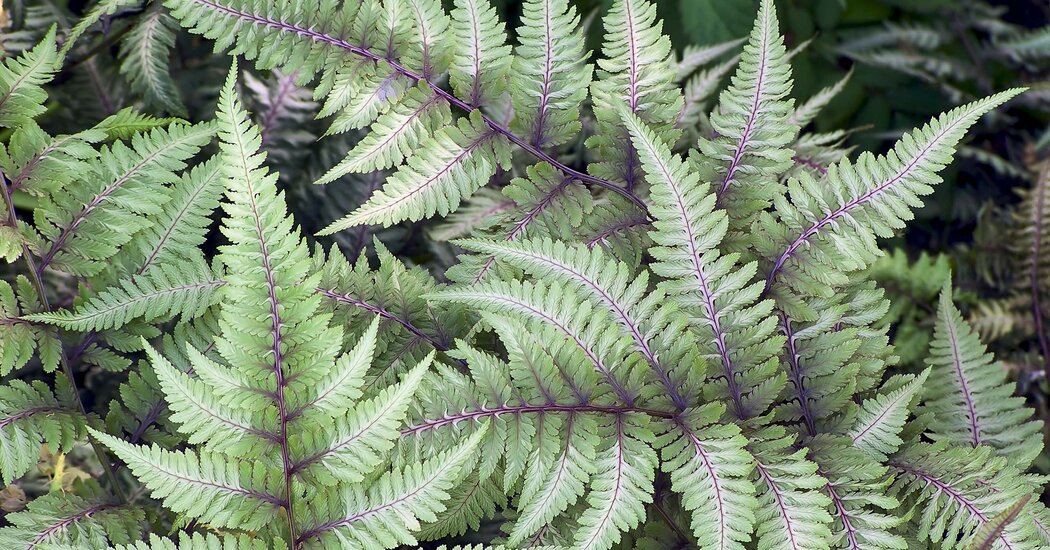 If You Think You Know What a Fern Is, Think Again

If you want suggestions of ferns to use as ground cover in shady spots, where you are probably already growing some, Mobee Weinstein has a list for you. But many of her ideas about making room for ferns in your life are less expected — and even the ground-covering types she recommends may be unfamiliar.

How about an eight-inch-tall carpet of native oak fern (Gymnocarpium dryopteris), through which precious spring woodland wildflowers like trillium, Jack-in-the-pulpit or violets would be happy to pop?

Or you could try combining a trio of un-fernlike ferns in an impromptu seasonal water garden, assembled in a trough. Or call another assortment of distinctive varieties into duty, as an indoor-outdoor centerpiece to grace the terrace dining table (before coming indoors to overwinter among the houseplants)?

That’s just the start of a list of fern-based inspirations from Ms. Weinstein, the author of “The Complete Book of Ferns” and a longtime foreman of outdoor gardeners at New York Botanical Garden.

If it were up to her, we’d have a full-on reprise of Pteridomania, the fern craze of the Victorian era.

Ms. Weinstein is a self-described foliage lover, owing at least in part to assignments early in her botanical career tending the fern-rich native plant garden, and then the fern house, part of the botanical garden’s historic greenhouse complex. Mentoring from staff scientists and curators who specialized in ferns deepened the connection.

She is ready to entice us with fern trivia: These are ancient plants, with the earliest fossil records indicating that they may have inhabited the earth 400 million years ago. Many of the oldest species are extinct, but others, like the interrupted fern (Osmunda claytoniana), a native to Eastern North America and East Asia, have racked up at least 180 million years of history, despite remaining essentially unchanged.

“The ferns know: When you find a winning formula, you stick with it,” Ms. Weinstein said.

Ferns are also diverse. In the Northeast, she noted, there are more than 100 native species (out of about 10,500 worldwide).

A fern’s tightly coiled emerging frond, or fiddlehead, is named for the distinctive carved scroll at the top of a violin. (Its other name, crozier, refers to the curled ornament at the top of a bishop’s staff.)

But not everything ferny is a fern, she reminds us — like asparagus fern, for instance. And not everything that is a fern looks fernlike (Equisetum hyemale, or horsetail, is a prime example). To be a fern, you must be a vascular plant with megaphylls (leaves that have more than one vein) that reproduces by spores, not seeds.

Most ferns want bright, indirect light, as well as loose, rich soil and ample moisture. But hoping you’ll adopt some of the others as well, Ms. Weinstein will tell you that ferns range from terrestrial to aquatic, epiphytic (perched on tree branches) and epipetric (on the surface of rocks).

Probably no enticement is needed beyond the ferns themselves, once you slow down for a closer look at what she calls “their intricate fractal geometry.”

In the Cracks and Crevices

To soften and dress up a stone wall — or in pocket-size spaces in a rock garden or other rocky area — Ms. Weinstein tucks in small-stature ferns.

Maidenhair spleenwort (Asplenium trichomanes), which she calls “one of the most handsome little ferns — just darling,” is a willing candidate, native to temperate climates on all continents but Antarctica. It likes well-drained soil in part to full shade, but can tolerate dry conditions once it is established. Its stipes, the stalks to which the leaflets (called pinnae) are attached, are almost black, which adds to the visual interest.

Another Asplenium, the dragontail fern (A. ebenoides), is an Eastern American native with similar light preferences. The jaggedly spiky fronds inspired its common name, and it can adapt to indoor terrariums.

Holly fern Woodsia (Woodsia polystichoides), an Asian native with softer green foliage, is another charmer that Ms. Weinstein recommends, and “one of those rare ferns that likes some sun — though not full sun.” Besides wall pockets, you can use it to transform the surface roots around the base of an older tree, where “it weaves some greenery into all those little nooks.”

The Most Colorful Show-offs

Some ferns, whether for their color, texture or stature, really stand out. The 12- to 18-inch-tall Japanese painted ferns (Athyrium niponicum Pictum) lead the color list. Their foliage is very variable, from silvery-gray to burgundy, so choose carefully among the many named varieties.

On a larger scale, at 24 to 30 inches, is the hybrid Athyrium called Ghost, a cross between the Japanese painted fern and the North American native lady fern (Athyrium filix-femina). Its upright, grayish-green or silver fronds with burgundy midribs provide contrast in the garden.

Or consider the Asian autumn fern (Dryopteris erythrosora). Despite its common name, its fronds arise in russet or coppery-pink in spring, when it is at its showiest, and then turn shiny green, with some warm tones again in fall. At the botanical garden it’s evergreen, Ms. Weinstein said, a welcome extra.

The native ostrich fern (Matteuccia struthiopteris) always tops Ms. Weinstein’s list, she said, calling it “majestic” — although it may be too rambunctious in the garden, except in dramatic, large drifts on its own.

But there’s good news: A living piece of architecture (and a source of edible fiddleheads), it is gorgeous in a large, weatherproof container like a half whiskey barrel. And because it is extremely cold-hardy, it can withstand winters aboveground for year-to-year perennial enjoyment.

The tassel fern (Polystichum polyblepharum) makes a beautiful, arching mound maybe two feet across and half as high, embellished with the feature that inspired its Latin species name: Poly means many, and blepharum is eyelashes; the stipes are covered in what look like so many tiny brown lashes.

“You could have a beautiful sweep of that in your garden, but even one is dramatic,” Ms. Weinstein said of this semi-evergreen Asian species.

For more texture, try the golden-scaled male fern (Dryopteris affinis, from Europe and Asia), which has striking golden-brown scales on its fiddleheads, then forms a massive clump of leathery foliage, growing to three or even four feet tall.

Ms. Weinstein is hardly alone in craving the look of the tropical maidenhair ferns that we know as houseplants, with their dissected leaves, like so many tiny green teardrops on arching black stems. A hardy look-alike that she recommends (and grows on her terrace in a pot) is the Himalayan maidenhair (Adiantum venustum), just eight inches tall, which has coppery tones when emerging, like other maidenhairs.

Ms. Weinstein does not recommend unleashing the living fossil Equisetum into the garden: It’s too weedy, despite being native to North America (and Eurasia).

But imagine a water-filled, trough-garden combination featuring a mini-stand of that stiff, linear horsetail and two other not-very-fernlike ferns: In a waterproof vessel, stand a pot of Equisetum and a pot of water clover (Marsilea quadrifolia), a fern that looks like a bunch of four-leaf clovers. Prop them up with rocks to the desired height, and cover the water surface with Azolla, a floating plant available at mail-order water-garden suppliers.

A note on potting up horsetail and water clover: Use garden soil mixed with a little compost and sand, not bagged potting soil (otherwise, ingredients like perlite will float to the surface and spoil the effect).

For this, you’ll need a low bowl- or box-shaped container and enough four-inch potted ferns — the size usually sold in the houseplant department — to fill it pretty snugly. The container must be deep enough to hold the pots. Look for variety in texture and shades of green that will complement one another.

You’ll also need a bag of Spanish moss, and a little sleight of hand — oh, and some stick-on bumper pads to keep the vessel from scratching the table and to allow some breathing room underneath.

Affix the bumpers to the bottom of the planter, then simply arrange the ferns, pots and all, in a pleasing way inside. Use the moss to conceal pot rims and the gaps in between, creating the illusion of a knitted-together garden. After this serves as a centerpiece outdoors, it can winter indoors by a window or be broken up into individual windowsill plants.

But that’s not Ms. Weinstein’s last suggestion: She’d also like to convince you to adopt an epiphytic staghorn mounted on a tree round or piece of cork, to hang on a garden trellis or tree, “making it all tropical-y and jungle-y.” Come winter, you can bring that inside, too.

In “The Complete Book of Ferns,” Ms. Weinstein offers one more enticement for the fern-hesitant.

“When we plant ferns in the garden or in containers indoors, we get to live with some of the oldest organisms on the planet,” she writes. “Maybe if we spent more time with ferns, we’d learn something of their secret to living with grace, beauty and strength.”

Margaret Roach is creator of the website and podcast A Way to Garden, and a book of the same name.

Denial of responsibility! TechiLive.in is an automatic aggregator around the global media. All the content are available free on Internet. We have just arranged it in one platform for educational purpose only. In each content, the hyperlink to the primary source is specified. All trademarks belong to their rightful owners, all materials to their authors. If you are the owner of the content and do not want us to publish your materials on our website, please contact us by email – admin@techilive.in. The content will be deleted within 24 hours.
Fernlifestyle newslifestyle updatenews updatetechi live
0
Share

‘Better Than the Hospital’: Pandemic Boosts Care for Serious Illnesses at Home