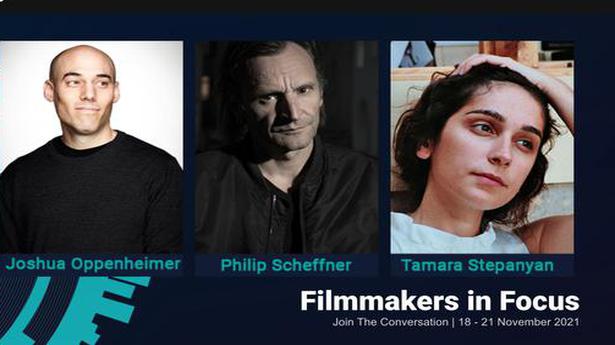 The event is conceptualised to get the community to engage not just with actors and filmmakers, but also the technicians behind the making of these projects

The eighth edition of the Urban Lens Film Festival is set to go virtual for the second consecutive year. To be held for four days from November 18, the event is organised by the Indian Institute for Human Settlements (IIHS) in collaboration with Goethe-Institut/Max Mueller Bhavan and Institut Francais, to create a space for interested viewers to watch films and talk about cinema.

Audiences are invited to register on the official website — https://urbanlens.iihs.co.in/ — and view the films for free.

Filmmaker Subasri Krishnan, one of the organisers of the festival, said that Urban Lens is conceptualised to get the community to engage not just with actors and filmmakers, but also the technicians behind the making of these projects. “This is one of the few festivals that is dedicated to issues in the urban setting, and talking to everybody who has been involved in the making, from editors to cinematographers,” she said. “This year, our masterclass is with an animator; we try to bring in people from different professional backgrounds,” she added.

This year, the festival will feature 27 films from over 10 countries. The themes include The City and Beyond, COVID-19 and Conflict and Cinema. Some of the Indian films are About Love by Archana Atul Phadke, and Saboot by Ekta Mittal and Yashaswini Raghunandan, while international films include The Act of Killing by Oscar-nominated Joshua Oppenheimer and Day of the Sparrow by German filmmaker Philip Scheffner. The festival will also feature works by the institute’s students, including Aditi Bhande’s Did You Do It? and Ekaant by Sarthak Bhasin.

Yashodara Udupa, another organiser, said, “Broadly the films are about cities, cultures and the lived-in experiences of its people.”

The COVID-19 section will feature films that reflect on various experiences of the pandemic, whereas Conflict and Cinema will showcase projects that have responded critically to events in history.

Filmmakers in Focus will have filmmakers Joshua Oppenheimer, Philip Scheffner and Tamara Stepanayan talk about their art; they will be in conversation about the films and context in which their works have been produced. The festival will also have two-panel discussions, one on Labour and the City with Paromita Chakravarti and Neethi P, moderated by Gautam Bhan. The next session, on the Future of Cinema with Beena Paul, Daniel Mattes and Rada Sesic, will be moderated by Shabani Hassanwalia.

There will also be a book discussion on the book Bombay Hustle: Making Movies in a Colonial City with the author Devashree Mukherjee, moderated by Rohan Shivkumar. As a part of the masterclass, Nina Sabnani will be in conversation with Paromita Vohra on animation, ethnography and exploring the dynamics between words and images in storytelling.

Independent filmmaker Aditi Bhande is an alumnus of IIHS, who used to attend the festival as an audience member earlier; to now have her work Did You Do It? showcased is a dream come true. “I have tried to capture the everyday issues of Ghaziabad through my film; there are farms, urban landscapes, rivers, colonies and there is the bigger issue of garbage collection. I have brought parallels between the crisis that is outside the world and the crisis inside the body,” she says, adding that through her film, she has tried to draw people’s concern towards environment and climate change, and those responsible for all the issues in cities.

“The panel discussions and master classes are something that I always look forward to as well. Being able to connect one-on-one with international filmmakers like Joshua is one of the best things I like about Urban Lens,” Aditi quips.

Yashaswini Raghunandan and Ekta Mittal, filmmakers based out of Bengaluru, will have their film Saboot screened too. Shot during the pandemic, this film portrays everything that the Bengaluru Metro construction workers went through since 2020. “The COVID-induced lockdown and the subsequent reverse migration that we all witnessed after the pandemic struck, is one of the facets of the film. The other is how these migrant workers were all just thrown into labour colonies without payment, and all the struggles they had to go through because of this,” said Yashaswini.

She said that the Bengaluru Metro was the focal point, because of all the controversies it has been mired in since the construction work started, including development issues, and protests from various environmental organisations.

“Urban Lens is one of the key festivals that predominantly feature documentaries and films that start important conversations, and engage the audience to critically view films,” she concludes.

Denial of responsibility! TechiLive.in is an automatic aggregator around the global media. All the content are available free on Internet. We have just arranged it in one platform for educational purpose only. In each content, the hyperlink to the primary source is specified. All trademarks belong to their rightful owners, all materials to their authors. If you are the owner of the content and do not want us to publish your materials on our website, please contact us by email – a[email protected]. The content will be deleted within 24 hours.
2021 film festivalbangalore film festivalentertainment newsEntertainment updateFestivalFilmIIHSIIHS Urban Lens Film Festival
Share

White-Label LMS: What, Why, And How