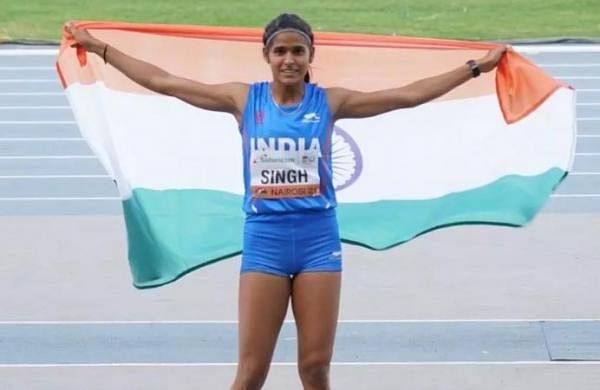 I’m sure she will bring Olympics medal, says Shaili Singh’s ex-coach after she clinches silver at World Athletics U20 Championships

JHANSI: After Shaili Singh bagged a silver medal in the women’s long jump event at the World Athletics U20 Championships in Nairobi, her former coach Arjun Singh said that the athlete is talented and capable and she will bring an Olympics medal for the country.

Speaking to ANI, Arjun Singh, who is also Jhansi District Athletic Secretary, said that he had recommended Shaili Singh for Anju Bobby Geroge’s long jump academy in 2016 as he was impressed with her talent.

“Shaili had shown talent at an early age. When she came to my academy in 2015, I knew that she was very capable and recommended her for Anju Bobby Geroge’s long jump academy in 2016,” said Shaili’s ex-coach.

Singh further stated that Shaili had already qualified for Junior World Athletic Championships in 2018 by creating a record in National U16 Championship in Visakhapatnam but the tournament got postponed due to the COVID-19 pandemic.

“She again created a record during 2021 national trials in Patiala. And it is such a great feat that she broke all the records of her coach Bobby George. To us, this silver medal is equivalent to a gold medal. I am sure this girl will get us a medal in the Olympics and make Jhansi and India proud,” he added.

Singh also said that though Shaili jumped 6.59 metres in the final event and lost the gold medal by one centimetre, she has already jumped 6.80 metres during practice and has a lot of potential.

Shaili’s family was also tickled pink with her achievement. “She has won a silver medal. We wish she wins a gold medal too. The whole village is congratulating us and everyone is celebrating her win,” said Shaili’s uncle.

“She had always been interested in sports since childhood. I feel very happy about her achievement,” said Meera Devi, Shaili’s grandmother.

Shaili Singh clinched a silver medal in the women’s long jump event at the ongoing World Athletics U20 Championships in Nairobi on Sunday.

Shaili jumped 6.59m in the third attempt registering her best show in the event to bag the silver while Sweden’s Maja Askag won gold with a jump of 6.60m. Ukraine’s Mariia Horielova managed to settle with bronze by recording 6.50m.

This was India’s third medal in the showpiece event having already won bronze in the 4x400m mixed relay team event on Wednesday and silver by Amit Khatri in the 10,000m racewalking event on Saturday. (ANI)

Loading...
Denial of responsibility! TechiLive.in is an automatic aggregator around the global media. All the content are available free on Internet. We have just arranged it in one platform for educational purpose only. In each content, the hyperlink to the primary source is specified. All trademarks belong to their rightful owners, all materials to their authors. If you are the owner of the content and do not want us to publish your materials on our website, please contact us by email – [email protected]. The content will be deleted within 24 hours.
Arjun SinghAthleticsbringChampionshipsclinchesexcoachmedalnews update
Share