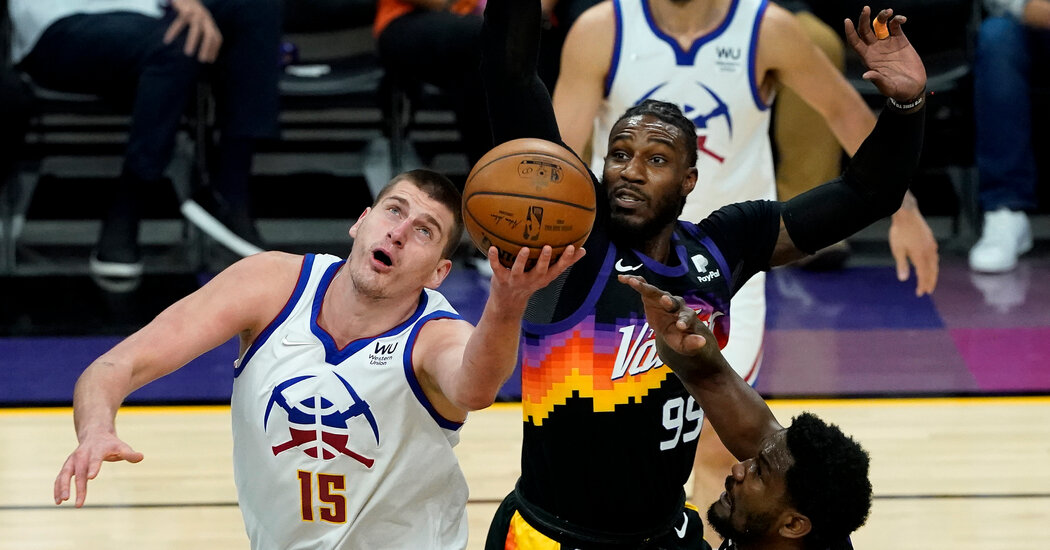 In Jae Crowder, the Suns Have an Enforcer With Some Flair

The Phoenix Suns had a growing lead on Wednesday night when Aaron Gordon of the Denver Nuggets tried to move toward the 3-point line on an offensive possession. He definitely tried. The problem was Jae Crowder had blocked Gordon’s path with his 6-foot-6, 235-pound frame. There was shoving and arguing, then a flurry of whistles and a mild tussle appeared in danger of turning into a full-blown fracas.

It was no surprise, of course, that Crowder, a forward who moonlights as the Suns’ resident enforcer, was in the middle of it. Crowder and Gordon were assessed technical fouls.

“Honestly, it comes at me, I don’t seek it,” Crowder said of his extracurriculars. “Other teams just try to be physical with me, try to get me riled up. I don’t know if they know it, but I like that style of play. I like to trash talk. I like all of that because it definitely gets me going, and I think my team definitely feeds off it a little bit, the energy of it.”

The Suns are roughing up the Nuggets — and Nikola Jokic, the N.B.A.’s freshly minted most valuable player — in their Western Conference semifinal series, cruising to a pair of lopsided wins ahead of Game 3 on Friday in Denver.

And while the Suns are powered by their backcourt tandem of Devin Booker and Chris Paul, Crowder has added an extra layer of feistiness and playoff experience. Most of the time, he does his work in the game’s quiet corners: defending, rebounding, screening. But when the need arises, he will surface to hit a 3-pointer or get in the face of an opposing player. It was no accident that TNT stuck a microphone on him for its broadcast of the Suns’ 123-98 win in Game 2 in Phoenix.

“Jae is never phased by anything,” Paul said.

In five straight playoff wins for the Suns, dating to the middle of their first-round series against the Los Angeles Lakers, Crowder has averaged 13.8 points and 5 rebounds a game while shooting 50 percent from the field and 46.2 percent from 3-point range. On Wednesday, he did not put up gaudy numbers — he scored 11 points — but picked his spots. He made the team’s first two field goals, then opened the second half with a 3-pointer that seemed to signal that a blowout was brewing.

“That’s just how we try to play,” Crowder said. “We try to impose our will early.”

The son of Corey Crowder, a former N.B.A. player for the Utah Jazz and the San Antonio Spurs, Crowder, 30, grew up outside of Atlanta (where he was a lightly recruited high school prospect). He attended two junior colleges before he landed at Marquette, where he was the Big East Player of the Year as a senior. His nomadic basketball life continued when the Cleveland Cavaliers traded him to the Dallas Mavericks shortly after they selected him with the 34th pick in the 2012 draft.

Crowder has played for seven teams in nine seasons, though he may stick around in Phoenix for a while. He signed a three-year deal worth about $29 million as a free agent in November after leaving Miami, and his value is clear: He does a bit of everything, which includes defending multiple positions and stretching the floor as a 3-point threat. And for a young team with big goals, he provides a level of physicality that comes only with experience.

Consider the Suns’ series with the Lakers, which featured something of a telenovela starring Crowder and LeBron James. Through the first three games of the series, Crowder struggled with his jumper (which can happen), shooting 7 of 27 from the field, and James went straight at him in the latter stages of the Lakers’ Game 3 win as James’s teammates egged him on.

Other players might have folded like origami. Instead, Crowder returned for Game 4 and scored 17 points — in front of a jeering crowd at Staples Center, no less — as the Suns evened the series.

In the Suns’ closeout victory in Game 6, Crowder scored 18 points on 6 of 9 shooting from the 3-point line (he did not attempt any shots inside the arc). During a break in play with less than a minute remaining, Crowder salsa danced directly in front of James — a homage of sorts to a dance that James performs in a commercial for Mountain Dew — and was ejected. Crowder, who is seldom boring, sprinted to the locker room like Usain Bolt.

Afterward, he posted a couple of photos of himself doing the salsa on his Instagram account (@Bossmann99), along with a caption: “AINT NO FUN WHEN THE RABBIT GOT THE GUN.” As if to make it abundantly clear that he had crafted the post himself, he signed it, “Big 99” — a reference to his uniform number.

“I felt like we got disrespected a little bit in Game 3 or whatever,” Crowder said, “so I did what I had to do in the closing game.”

While he pledged to do the salsa with fans in Phoenix if the Suns win the championship, Crowder said he was trying to exercise a bit more restraint with opposing players at this stage of the playoffs. He has already paid his share of fines.

“I’ve got to be smart,” he said. “I can’t always bite the bait and keep giving money back to the league.”

Against the Nuggets, the Suns are winning with balance. In both wins, all five starters have scored in double figures. They are passing the ball and operating as a collective whole, a high-speed machine with synchronized parts. Crowder is one among many, but important in his own way.

“It makes the task that much more difficult for our opponent when everybody’s rolling,” Crowder said.

Denial of responsibility! TechiLive.in is an automatic aggregator around the global media. All the content are available free on Internet. We have just arranged it in one platform for educational purpose only. In each content, the hyperlink to the primary source is specified. All trademarks belong to their rightful owners, all materials to their authors. If you are the owner of the content and do not want us to publish your materials on our website, please contact us by email – [email protected]. The content will be deleted within 24 hours.
CrowderEnforcerFlairJaenews updatesports newssports updateSuns
0
Share

In the post-COVID world, role of CSR will become even more important: Shridhar Venkat, CEO of Akshaya Patra