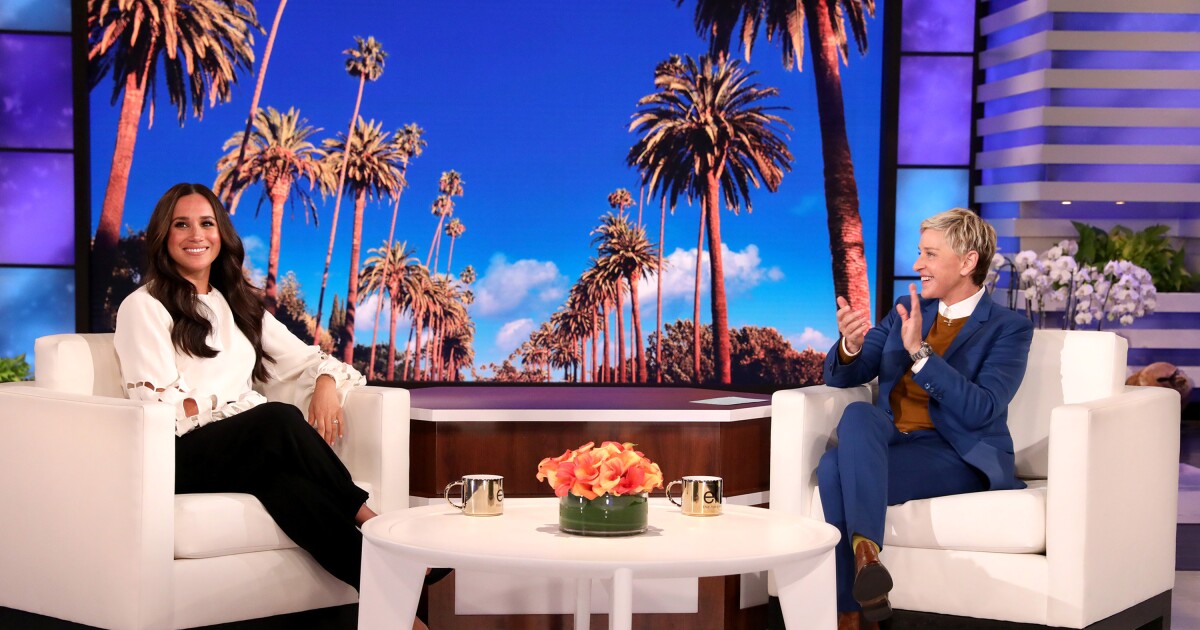 In rare TV interview, Meghan, the Duchess of Sussex, tells Ellen DeGeneres about her pre-royal days

From Oprah to Ellen: Meghan, the Duchess of Sussex, paid an unannounced visit to “The Ellen DeGeneres Show” this week for an episode that will air Thursday.

The former “Suits” star told host DeGeneres that it was her first time back on a talk show in about a decade and reminisced about returning to the Warner Bros. lot in Burbank after visiting it several times for auditions as a young actress.

In a sneak peek released late Tuesday, the former British royal told a cute story about her days as a struggling artist who drove a Ford Explorer Sport — a car that was so old, she had to crawl through the trunk to get into the driver’s seat.

The reason for her appearance on the show isn’t mentioned in the teaser, but the spot comes off as orchestrated for those keeping up with the Sussexes. You’ll recall, the last time Meghan did a major sit-down interview, it was with DeGeneres’ pal Oprah Winfrey in the spring and led to a reckoning that Buckingham Palace is still contending with today.

Meghan appeared on DeGeneres’ show to plug her children’s book, “The Bench,” The Times has confirmed.

Reps for “The Ellen DeGeneres Show” and the Sussexes did not immediately respond Wednesday to The Times’ request for comment.

The L.A.-bred star’s effort to increase her likability comes amid her more serious appearances devoted to advocacy for issues such as paid parental leave for all. But more importantly, it comes in the wake of a legal firestorm across the pond.

The mother of two appeared on DeGeneres’ farewell season, which is ending after allegations that the talk show host created a toxic work environment. Meghan has also weathered similar allegations, which came up again recently when her former communications secretary and royal aide, Jason Knauf, provided bombshell testimony during the appeals case stemming from hers and Prince Harry’s breach of privacy and copyright lawsuit.

Associated Newspapers Limited, publisher of U.K.’s MailOnline and The Mail on Sunday, is trying to overturn a British court’s February decision that favored the former senior royals. The legal battle took a twist last week when Knauf said he regretted not providing evidence earlier in the case and told the court that he helped Meghan draft a private 2018 letter to her father that was eventually leaked to the press.

Knauf revealed a number of exchanges between him and the duchess that undercut some of her previous testimony. Meghan also had to apologize to the court last week for misleading it about the extent of her cooperation with the authors of a sympathetic book about her and husband, Prince Harry, according to the Associated Press.

Her lawyers had previously denied that she or Harry collaborated with authors Omid Scobie and Carolyn Durand on their 2020 book, “Finding Freedom.”

But Knauf said in evidence to the court that he gave the writers information and discussed it with Harry and Meghan “multiple times in person and over email.”

Denial of responsibility! TechiLive.in is an automatic aggregator around the global media. All the content are available free on Internet. We have just arranged it in one platform for educational purpose only. In each content, the hyperlink to the primary source is specified. All trademarks belong to their rightful owners, all materials to their authors. If you are the owner of the content and do not want us to publish your materials on our website, please contact us by email – [email protected]. The content will be deleted within 24 hours.
daysDeGeneresDuchessellenentertainment newsEntertainment updateinterviewMeghan
Share