Notice: amp_is_available was called incorrectly. `amp_is_available()` (or `amp_is_request()`, formerly `is_amp_endpoint()`) was called too early and so it will not work properly. WordPress is currently doing the `pre_get_posts` hook. Calling this function before the `wp` action means it will not have access to `WP_Query` and the queried object to determine if it is an AMP response, thus neither the `amp_skip_post()` filter nor the AMP enabled toggle will be considered. It appears the theme with slug `publisher` is responsible; please contact the author. Please see Debugging in WordPress for more information. (This message was added in version 2.0.0.) in /home/runcloud/webapps/techilive/wp-includes/functions.php on line 5313
 In this season of obstacles, Lakers couldn't regain health - TechiLive.in 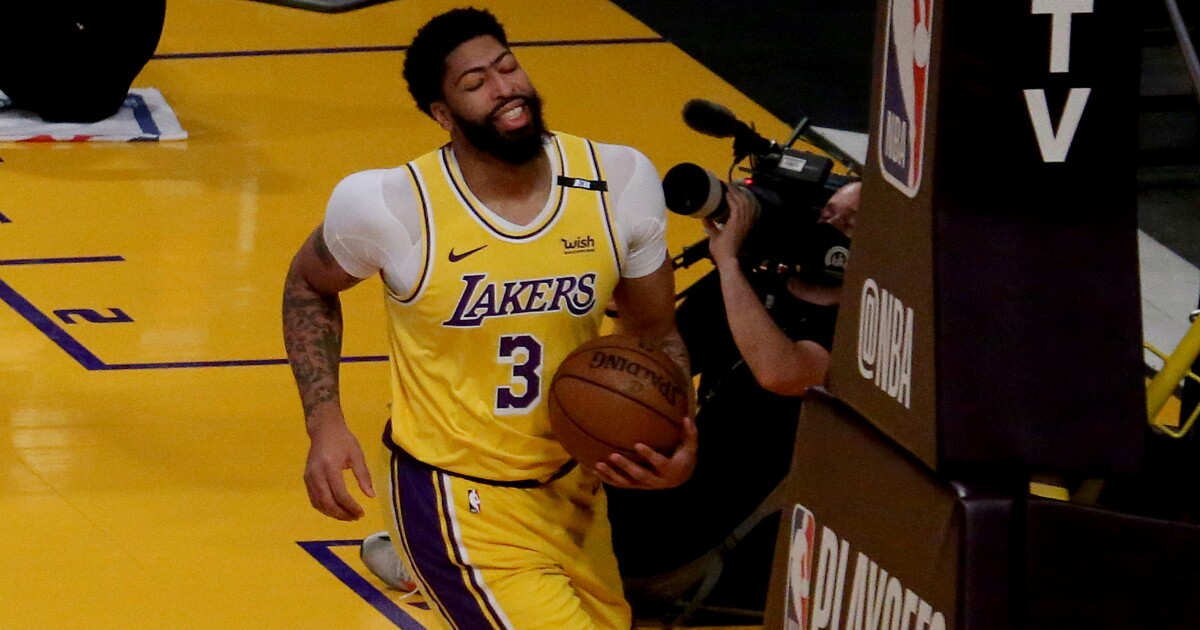 In this season of obstacles, Lakers couldn’t regain health

Instead of having his jersey soaked in champagne and being clouded by cigar smoke, LeBron James handed his uniform to Devin Booker, a trophy for the Phoenix Suns’ young star to take with him after he helped end what seemed like the longest season an NBA team has ever undertaken.

It’s been nearly 330 days since the Lakers arrived in Orlando for the league’s bubble experiment, a challenge they conquered. But with only 72 days separating the title celebration from its defense, the Lakers never felt like they started something new.

They spent this season merely trying to hang on to the glory they had.

“From the moment we entered the bubble to now, today, it’s been draining,” James said Thursday night after elimination from the playoffs. “Mentally, physically, spiritually, emotionally draining.”

The Lakers head into the offseason empty and unfulfilled, left to wonder whether the team they assembled would’ve been good enough if only their muscles hadn’t strained and their tendons hadn’t torn.

“The one thing that bothers me more than anything,” James said, “is we never really got an opportunity to see our full team at full strength.”

Time ran out on the Lakers’ plans to get healthy and whole. And it happened fast.

In some ways the end snuck up on the Lakers, much like the start of the 2020-21 season, which stars like James expected to start a month later than it actually did.

In other ways, how could things end any other way, the year designed to test NBA players in so many mental and physical ways, and the Lakers entering the season still recovering from the championship run.

It began in empty arenas under strict health and safety protocols, the schedule compressed to try to provide the league’s TV partners with as much content as possible without stretching the season too deeply into summer. Players were tested daily for COVID-19, required to wear masks on the bench and were mostly confined to their team hotels when not at home, where there were also rules about who they could interact with.

Instead of buzzing with conversations about long-term extensions for James and Anthony Davis or their offseason additions — Dennis Schroder, Marc Gasol, Montrezl Harrell and Wesley Matthews — the concourses at Staples Center were abandoned, the deafening hum of silence broken only by artificial crowd noise.

Even with Davis slowly playing himself into form, the team looked like one of the best in the league, its stars leading a defense that traded size and strength for smarts and versatility.

They were 21-6, Lakers coach Frank Vogel openly calling James the league’s probable MVP, before everything changed with one bad step in Denver.

Davis, playing in his second game after missing two because of Achilles soreness, reached to the back of his leg before limping his way off the court. A rupture was ruled out, but Davis wouldn’t return to the court for more than two months.

James would soon join Davis on the sidelines, Solomon Hill diving for a loose ball and taking out James’ legs instead, his screams echoing through the empty Staples Center. He’d miss more than a month because of a high ankle sprain, and he wouldn’t get back to 100% all season.

“We were rolling. We had the pieces. We just couldn’t stay healthy,” Davis said.

In and around those injuries, the Lakers had to deal with the realities of the ongoing pandemic. Alex Caruso and Schroder missed extended time after exposures to COVID. Gasol would test positive and miss three weeks. Schroder would end up back in the health and safety protocols in the final month of the season.

The team eventually reached the 85% vaccination threshold that lightened some restrictions, though not without controversy. Schroder told German media that he wasn’t vaccinated. On multiple occasions James declined to publicly say whether or not he received the vaccine. Along with a tweet in the aftermath of Derek Chauvin’s murder conviction, in which James posted a photo of another officer involved in a shooting in Ohio, the Lakers star found himself subject to plenty of off-court criticism.

With the two stars sidelined, the Lakers toyed with making big changes to the roster, discussing a trade with Toronto that would’ve had the team acquire veteran All-Star point guard Kyle Lowry in a deal that would’ve been centered on Talen-Horton Tucker and Schroder — who turned down an in-season extension. The Lakers ended up not meeting the Raptors’ price, but the team did sign center Andre Drummond after his contract was bought out by Cleveland.

Drummond moved into the starting lineup, another piece for the Lakers to try to fit.

Davis beat James back onto the court, with the duo finally set to play together for the final 10 games of the season, but James’ ankle sprain needed more recovery time. A loss in Portland pushed the Lakers into the postseason play-in tournament, forcing them to beat Stephen Curry and Golden State for a spot in the postseason.

The Lakers won and drew the Suns, entering the playoffs as favorites over No. 2-seeded Phoenix. By the middle of Game 3, it seemed like the Lakers were in control with a win in Phoenix and a 2-1 lead in the best-of-seven series. But injuries to Davis and Kentavious Caldwell-Pope derailed the Lakers’ postseason, the Suns winning the final two games to advance.

“The Phoenix Suns, the second-best record in the NBA for a reason,” Vogel said after the Lakers were eliminated. “This is a matchup that, if we’re whole, it should probably take place in the conference finals. But obviously the regular season was what it was with injuries, and we slipped.”

Unable to successfully defend their title, they were left to wonder whether they were good enough to have gotten it done had circumstances been different, had they gotten a little luckier.

“I feel like if we were healthy, 100% healthy, I feel like we could have won this year,” Caldwell-Pope said.

Instead, they walk into an offseason left to decide whether or not to run it back. Schroder, Caruso, Drummond and Horton-Tucker are among the team’s key free agents. Harrell has a player option to return that he could exercise. And if the Lakers don’t believe they’re good enough, they’ll have to find creative ways to address it with the team already committed to playing Davis, James, Caldwell-Pope and Kyle Kuzma a combined $103 million next season.

With all that at stake, you’d think the Lakers would have left Staples Center angry Thursday night, frustrated with a season that ended before they could reach their goals.

While there was some of that, there was also some relief, the Lakers getting the time they need to reset before trying for another title.

“Build up. Rest and get right back,” Davis said.

Next season will be here before they know it.

Denial of responsibility! TechiLive.in is an automatic aggregator around the global media. All the content are available free on Internet. We have just arranged it in one platform for educational purpose only. In each content, the hyperlink to the primary source is specified. All trademarks belong to their rightful owners, all materials to their authors. If you are the owner of the content and do not want us to publish your materials on our website, please contact us by email – admin@techilive.in. The content will be deleted within 24 hours.
Loading...
couldntHealthLakersnews updateObstaclesregainSeasonsports news
0
Share