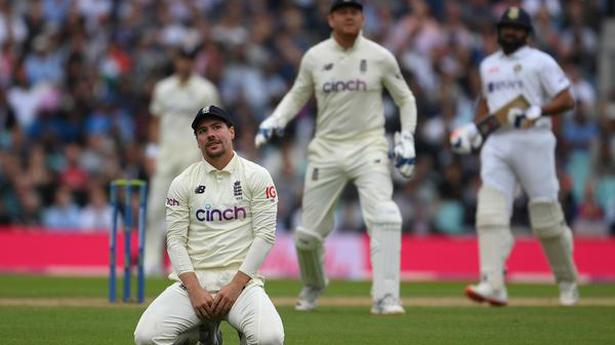 Battle-hardened India exposed shortcomings of England in all departments with their famous win in the fourth Test, reckons former skipper Michael Vaughan.

India were on the backfoot initially but conjured up a comprehensive 157-run win at the Oval on Monday to take a 2-1 lead in the five-match series.

Vaughan found faults in every department of the game.

“The deficiencies of England’s Test team were laid bare this week in batting, bowling and fielding. They were beaten by battle-hardened opponents who know how to win the key moments,” Vaughan wrote in his column for The Telegraph.

“It started with their catching on day one, continued through their batting in the first innings before their bowling was exposed on a flat wicket over the weekend.

“I would like to know why in the last couple of years this fielding team has not improved. They continue to drop chances and should have bowled India out for 125 in the first innings,” he said.

Vaughan said England did not make enough runs in their first innings and also questioned the shot selection of the batsmen.

“England played some poor strokes through lapses in concentration. Haseeb Hameed chased a wide ball, for example, and Moeen Ali top-edged one in the air when England were strolling the game. Those were poor cricket shots.

“England lack pace and variation to make things happen in flat conditions. This England Test team are dependent on the pitch helping them. When that happens they look like taking 20 wickets like they did at Headingley, otherwise they struggle.”

“The run out of Dawid Malan was a prime example. If you are busy from ball one you are alert to singles but Malan was on his heels because he was not expecting that call from Hameed. That is a lack of intent. It was an insight into England’s mindset. They were just batting.”

The former captain also did not like the way England chose their combination for the Oval Test.

“Not that long ago England were saying they always wanted one pace bowler in the team. Why did they not go back to Mark Wood for this game? Not for the first time, they selected the team that did well the week before in different conditions. The mindset needs to change. They have to be smarter.

“England have to work out how to become battle-hardened when the pressure is on. I always question some of their thinking. Why did they appoint Moeen as vice-captain? He has barely been in the side for two years. It would have been a nice little boost for (Rory) Burns, who is a regular in the side, to be made vice-captain this week on his home ground.

“It was a decision that puzzled me and perhaps put more pressure on Moeen who is still making his way back in the game.”

Loading...
Denial of responsibility! TechiLive.in is an automatic aggregator around the global media. All the content are available free on Internet. We have just arranged it in one platform for educational purpose only. In each content, the hyperlink to the primary source is specified. All trademarks belong to their rightful owners, all materials to their authors. If you are the owner of the content and do not want us to publish your materials on our website, please contact us by email – [email protected]. The content will be deleted within 24 hours.
BareDeficienciesEnglandsIndialaidMichaelnews updatesports news
Share

Sonam Kapoor Ahuja opens the doors to her London home