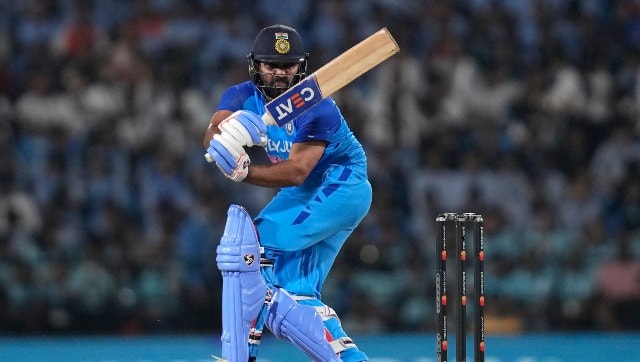 India vs Australia: Rohit Sharma’s knock and other talking points from second T20I

In a match shortened due to wet outfield at the VCA Stadium in Nagpur, India came out on top against Australia, winning the second T20I by six wickets to level the series 1-1 with a game to go.

After Matthew Wade’s unbeaten 43 took Australia to 90/5 from eight overs and after the game was curtailed due to wet outfield, Rohit Sharma outshone Wade with an unbeaten 46 to see India cross finish the line with four balls to spare.

Axar Patel finished with economical figures of 2/13 from two overs at an economy of 6.50, scalping the wickets of Tim David and Glenn Maxwell early in the Aussie innings.

The series decider will be played on Sunday in Hyderabad, but before that, let’s take a look at some of the talking points from the second T20I:

Team India’s run-chase of 91 was successful but it was never perfect in any sense. They had their own blips and setbacks during the course of the allotted eight overs, losing wickets at regular intervals. Suryakumar Yadav was in fact a victim of a golden duck, while Virat Kohli managed just 11 runs.

However, skipper Rohit Sharma led the Men in Blue from the front, playing a knock of 46 off 20 balls while opening the innings. His knock consisted of four fours and as many sixes.

Rohit and Rahul started the chase on a confident note, but the skipper lost his opening partner in the third over, with Zampa getting the wicket. None of the partnerships that followed looked substantial, but Rohit stood firm to see India off the finish line, with Dinesh Karthik (10*) at the other end.

Rohit Sharma was adjudged Player of the Match for his match-winning heroics.

Australia’s major takeaway as far as their bowling was concerned was Adam Zampa. The spinner picked up three wickets on Friday, finishing with figures of 3/16 from two overs to end up as Australia’s most economical bowler in the game.

Zampa first cleaned up KL Rahul for 10 in the third over, but his major turning point came when he dismissed Virat Kohli (11) and Suryakumar Yadav (0) off two consecutive balls in the fifth over of the Indian run-chase.

Kohli looked to work through midwicket but it skidded through and the ball crashed onto the leg-stump.

Zampa struck the very next ball, removing Suryakumar Yadav for a golden duck. Suryakumar was looking to go sweep this one but missed it and it hit plumb in front of middle stump. SKY had a brief chat with Rohit, but it was a correct decision to not go for the review.

Apart from Zampa, the only other Aussie bowler who got a wicket was Pat Cummins, who removed Hardik Pandya for nine.

India pacer Harshal Patel endured figures of 0/32 from just two overs. Apart from going wicketless in his two-over spell, he endured a nightmarish over when he was hit for three sixes in the eighth over by Matthew Wade.

The first six came in the second ball of the eighth over, when Harshal unleashed a slower short ball outside off, and Wade slammed the pull over midwicket. The second maximum came just a couple of balls later, when Harshal launched a full toss outside off, only for Wade to step on the front foot and carve over deep cover for the maximum.

The third one in the over came in the very next ball, the penultimate ball of the over, when Harshal delivered a very short ball, for Wade to pull over deep square leg for the maximum. Harshal finished that over, conceding as many as 19 runs in it.

The second India-Australia T20I witnessed Dinesh Karthik, the 37-year-old cricketer, finish off the match in style, with a boundary.

Dinesh Karthik, whose IPL performances with the bat has seen him return to the India T20I side this year, came into bat towards the end of the game, when Hardik Pandya was dismissed by Cummins in the seventh over.

Bowling the last ball of the seventh, Cummins went wide of off-stump to concede an extra, and had to rebowl that one.

Rohit, who was on strike at the time, collected a boundary off the redelivered final ball to make the equation nine to win from six balls for India.

Daniel Sams delivered the final over of the match. DK, facing a slower ball drifting down leg, swung it away along with the angle to hoick over backward square leg. India now needed just three runs off five balls, and a short, slower ball from Sams allowed DK to hammer a pull shot, and play it through the gap of deep midwicket fence, where the fielder could not just get the hang of the ball to save the boundary.

The match ended with a four, and a classic DK finish (10* off two balls), and now the series sets up for a thrilling finale on Sunday in Hyderabad.

Denial of responsibility! TechiLive.in is an automatic aggregator around the global media. All the content are available free on Internet. We have just arranged it in one platform for educational purpose only. In each content, the hyperlink to the primary source is specified. All trademarks belong to their rightful owners, all materials to their authors. If you are the owner of the content and do not want us to publish your materials on our website, please contact us by email – [email protected]. The content will be deleted within 24 hours.
AustraliaIndiaknocknews updatepointsRohitSharmassports news
0
Share

COVID-19 associated with increase in new diagnoses of type 1…