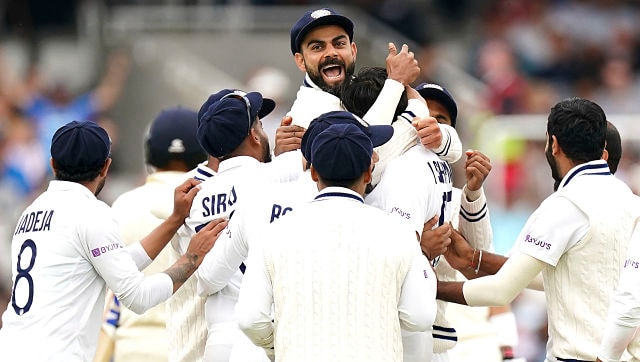 “England are going to be absolutely battered and bruised.”: Andrew Strauss after England’s defeat at Lord’s.

No, England were not beaten by an innings at Lord’s. They weren’t beaten by over 200 runs or 10 wickets. They are not trailing 0-3 or something in the five-match series. They will be battered and bruised because of the manner of the defeat. And Strauss is right. Such defeats can be mentally deflating. Knowing that you were in the driver’s seat and then losing in the manner they did, could have hurt them more than anything else. From being on the front foot, England were forced to defend, and were eventually knocked out by a fired-up Indian side.

Yes, the batting troubles are there but their primary challenge would be to recover mentally from the loss. They need to hit the refresh button as they head into the third Test at Headingley in Leeds. The eight-day gap between the second and the third Test might prove to be a boon for the home side. It’s given them time to just switch off, visit their homes, spend quality time with their families and wipe the slate clean in their heads. In these pandemic times, family comes as a perfect antidote.

The secondary challenge is finding those runs. The first innings of the Lord’s Test provided some hope for England as the men around Root chipped in with little contributions, not humongous but better than the first Test. But the manner of capitulation in the second innings would have been a confidence sapper. They looked like deer in headlights against a rampaging Indian pace attack. This is where they need to absorb pressure amid the storm and learn to steady the ship. Factor this, apart from Root who averages a staggering 128.66 (with 386 runs from four innings) in this series, no English batsman has averaged over 30. The next best is Bairstow — 29.50. And after that, everyone has averaged 20 or less. Compare that to India and you have two batsmen averaging over 50 and overall five batsmen averaging over 30.

The top order has been their Achilles heel for a long time. Before the start of the series, their top three average was the worst among all nations since the start of the year — 20.84. It has plummetted further to 13.83 in this series. Another worrying number for England has been the number of ducks in this series. There have been 12 of them in two Tests so far. They need someone to lay that platform upfront, see off the tough period and provide that support to Root. The first casualty has been Dom Sibley who has been dropped from the squad. Dawid Malan has been recalled to the squad for the first time in three years and England will pin their hopes on him to solve the top-order problems. The last time he played in a Test was against India in Birmingham in 2018.

He’s averaged 27.84 in the Test arena and just like KL Rahul, it’s a chance to revive his Test career as he is set to bat at No 3 in the Leeds Test. In the period where he’s been out of the Test side he’s gone on to become the No 1 ranked batsman in the T20I arena. And it’s that overall international experience along with experience of playing under pressure that Root is banking on.

For England’s batting, the need of the hour is big partnerships. They’ve had just one century partnership so far, between Root and Bairstow in the first innings of the Lord’s Test.

“Collectively I think the most important thing when you look at batting in Test cricket, it revolves around big partnerships,” Root said in the pre-match conference. “When two guys bat for a period of time, the game can look completely different and that’s got to be our focus as a batting group. We’ve got to keep looking at making those big substantial partnerships which can put you in a strong positions as a team.”

It’s not just the batting concerns. The injury problems have grown in the bowling department as well. After Broad, Mark Wood is ruled out of the 3rd Test with a shoulder injury. Saqib Mahmood, who shone in the white-ball series against Pakistan, might be in line to make his Test debut but given their batting concerns, England might be tempted to go with Craig Overton who can give a bit of batting insurance. Or maybe they might include both and bench Sam Curran who hasn’t had the same impact with the bat as in 2018. But that seems unlikely. Burns and Haseeb Hameed might open the batting with Malan coming in at three.

After the 2018 series loss, Virat Kohli had talked about not ‘warming up’ in the opening Tests and getting a strong footing straight away in the future series. Well, he’s done that on this tour. India were in the driver’s seat at Nottingham before rain washed out the entire final day. Now they have gone into the lead with the win at Lord’s. They need to maintain that pressure on England from here on. The 2014 England tour will be in their minds, just like 2021, they won the Lord’s Test (2nd of the series) to go 1-0 up and then capitulated in a dramatic fashion to lose the series 1-3). If they manage to win the Headingley Test, it will be the only second time they will win more than one Test on England tour. The last time they managed the feat was way back in 1986 under Kapil Dev’s captaincy.

The on-field war of words charged the Indian team up on the final day at Lord’s. And they will look to carry forward that momentum into Headingley. There were many positives from the Lord’s Test but one of the biggest was the second-innings 100-run partnership between Cheteshwar Pujara and Ajinkya Rahane, who have been struggling with their form. Those runs acted as a catalyst for India’s victory. Though they didn’t look at their best, they displayed great survival instincts. They would look to carry that confidence forward and get back to their best at Leeds. Another batsman who will be searching for runs is Virat Kohli. The century drought has stretched to 17 innings now and he’s averaged just 20.66 in this series without a single fifty-plus score. Those ‘outside the off stump’ problems seem to have resurfaced. He will be desperate to break those shackles in Leeds.

It will be interesting to see whether Kohli will be tempted to go with R Ashwin with a possibility of four lefties in the English line-up — Burns, Malan, Moeen, Curran or stick to the four pacers and one spinner template. Kohli was surprised by the look of the pitch ahead of the Test which might tempt him to go with Ashwin.

“We are quite surprised to see the pitch the way it was,” Kohli said in the pre-match conference. “We could see a lot of the surface, which honestly I didn’t expect would be the case. I thought there would be more grass on the pitch, and it would be more spicy and lively, so anything is possible. We always name a 12 and on the day we have a look at the pitch and what it could become on day three, day four, and accordingly, we will go with the right combination.”

The pacers have vindicated Kohli’s trust by picking up all 20 wickets in the two Tests so far along with crucial lower-order runs. Shardul Thakur is fit again but with Ishant Sharma having impressed at Lord’s, India might not look to tamper with the winning combination. While Kohli spoke about the lack of grass on the track, he also said that “We have got no reason to change anything unless people have niggles, which we haven’t encountered since we finished the last Test.” So nothing can be ruled out.

The memories of the epic Ashes Test will still be fresh in England’s minds as they return to Headingley after two years. from 67 all out in the first innings to chasing down 359 in the fourth. It was a real roller-coaster ride that was guided to the right destination by Ben Stokes.

England don’t have their Superman this time around and will be hoping someone else steps up in his place.

None of the Indian players have played at Headingley as India will be playing at this venue for the first time in 19 years, so it will be interesting to see how they respond and adapt to a totally new territory. The last time they played here, Rahul Dravid, Sachin Tendulkar, Sourav Ganguly, and Anil Kumble combined to blow England away by an innings and 46 runs. Overall, India have had the second-best win-loss ratio at Headingley of all venues in England — 0.66 with two wins, three losses and one draw from six matches.

With a fired-up India looking to maintain the stranglehold and bruised England looking to bounce back hard, Headingley is nicely set up for another cracker.

Denial of responsibility! TechiLive.in is an automatic aggregator around the global media. All the content are available free on Internet. We have just arranged it in one platform for educational purpose only. In each content, the hyperlink to the primary source is specified. All trademarks belong to their rightful owners, all materials to their authors. If you are the owner of the content and do not want us to publish your materials on our website, please contact us by email – [email protected]. The content will be deleted within 24 hours.
aimbruisedbuttonenglandFirstcricketFirstpostHithosts
Share

TikTok will soon users to shop through app after Shopify deal