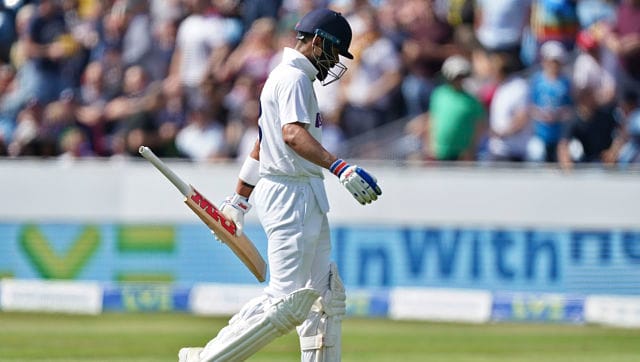 India vs England: Team combination in focus as visitors look to channel Headingley hurt at The Oval – Firstcricket News, Firstpost

“The guys in the changing room are hurt. When you are hurt, you really want to correct the things that did not go our way. That is the way we will play the next two Tests,” Virat Kohli said after the Leeds Test defeat.

From the high of Lord’s, India’s fortunes swung dramatically as they came crashing down to an innings defeat at Headingley. That 78 all out hurt. Root’s century hurt. The 63/8 capitulation on the final day hurt. Kohli was frank and forthright in accepting their mistakes after the defeat and vowed to bounce back hard. It sent out a strong message.

India’s mental strength has stood out in the last few years. After facing the humiliation of 36 all out in the Pink Ball Test at Adelaide in the 2020-21 Australia series, they turned it around to win the series. Against England they went 1-0 down at home, suffering a huge defeat in the first Test but bounced back to win the series 3-1 and seal a place in the WTC final.

India started off well in this series. Positive starts have been rare overseas. They were in the driver’s seat at Nottingham before rain washed out the final day. They won a thriller at Lord’s. But then suffered a jolt with a defeat at Headingley. It has jolted their momentum and provided England some of it after their manner of the defeat at Lord’s.

Virat Kohli walks back after getting dismissed in the 2nd innings of the 3rd Test at Headingley. AP

Kohli is someone who loves challenges. And he has moulded this team in that way. It’s a team that has delivered under pressure. With their backs to the wall, they will be looking to channel their inner hurt of Headingley defeat to bounce back at The Oval.

“We like to be in this situation where people start coming at us with doubts and start questioning our ability. That is the situation we love best. We will not be demoralised by this loss,” Kohli said.

The above two quotes somewhat sent out a strong warning that India will stride out at The Oval with more determination and resolve.

However, it won’t be easy. They have to recover mentally in such a short time, solve the batting problems and get the combination right.

Cheteshwar Pujara’s 91 in the second innings in Leeds brought a huge relief to the struggling batting order. But that middle order is still massively short of runs. Virat Kohli’s ‘outside the off stump’ problems have resurfaced and he’s gotten out in a similar manner in all of his five innings so far. He’s averaged just 24.80 and the search for a century has extended to 19 innings.

Apart from that 61-run knock at the Lord’s, Rahane has struggled. He’s averaged just 19 in this series. Rishabh Pant too has suffered a similar pattern of dismissals, chasing and poking outside off, and averaged just 17.40. Rahul has scores of 5, 8, 0 in his last three innings. Pant will however have happy memories of The Oval where he got his maiden Test century when India visited the English shores last time in 2018. He (114 off 146 balls) along with Rahul (149) provided a scare to England while chasing 464. India lost the match but their fight stood out. Pant has the support of captain Kohli who’s said that the wicket-keeper batsman will be given “all the space to play his game and understand situations and take responsibility like it is expected of everyone else in the batting order.”

The one batsman who has impressed the most is Rohit Sharma. He’s batted with great restraint and patience. He will again be the key heading into the Oval Test and that three-figure mark will be on his mind which has eluded him so far in the series. The form of the batsmen, the pitch and the past numbers at The Oval bring the team combination into focus.

There are a lot of permutations and combinations. Should they drop Rahane and bring in Hanuma Vihari and go with five bowlers? Or continue with Rahane and add an extra batsman in Vihari to bolster the struggling batting order? It would mean they will have to go in with four bowlers. Kohli has been a strong advocate of five-bowler theory.

“I don’t believe in that balance (of seven batsmen and four bowlers),” Kohli said after Leeds defeat. “I have never believed in that balance. Because either you can try to save a defeat or try to win the game. We have drawn games in the past with similar number of batters in the team. So, if your top six or seven don’t do the job, that extra batter is no guarantee of bailing you out every time.

“You have to accept that as a team you take responsibility and pride in doing the job for the team. If you don’t have the ability or the resources of taking 20 wickets going into as Test, then you are only playing for two results. And that’s not how we play.”

Also, in the last six years, the Oval has been the best batting ground in England (on venues where three or more matches are played), with an average of 32.25 runs per wicket. So Kohli will need the cushion of that extra bowler on that surface. There is a lot of pondering to do with regards to the personnel as well. Go with the template of four fast bowlers and one spinner or play two spinners and three pacers?

In the post-match conference in Leeds, Kohli had said that they will look at the pitch and conditions to decide the combination. But he also said that the four pacer template works because of the pressure the fourth seamer creates especially if you lose the toss and have to bowl on a fresh wicket on Day 1.

India’s bowling coach Bharat Arun confirmed that Jadeja is fit after undergoing a knee scan. So in all probability, he will play. But Ashwin also comes into the picture given spinners’ past numbers at the Oval and the fact that England might have four left-handers in their line-up – Rory Burns, Dawid Malan, Moeen Ali and Sam Curran. So one of the pacers might miss out. After the Headingley Test, Kohli had also hinted at the rotation of the pacers to manage the workload. India have included stand-by pacer Prasidh Krishna into the squad. Either Krishna, Shardul Thakur, or Umesh Yadav might come in, or maybe even two of them to help manage the workload of Jasprit Bumrah, Mohammed Shami, Ishant Sharma and Mohammed Siraj.

It seemed India missed the services of Ravichandran Ashwin in the third Test with the rough created on the pitch. The last time India played England at The Oval, in 2018, Jadeja picked up the most wickets in the match – 7. So there might be a temptation to play Ashwin as well with the forecast mostly warm and dry. Arun said that they will look at the track on the matchday and take a decision on Ashwin’s inclusion.

Not long ago, England were in a similar position as India when they suffered the Lord’s defeat. The manner of the defeat hurt them the most. The eight-day break between the Lord’s and Headingley Tests helped them switch off and recuperate. The manner of the win in Leeds would have injected a lot of confidence. The biggest positive was their batting which finally clicked. Haseeb Hameed and Dawid Malan made strong statements on their comebacks. Burns found some form. Root was magnificent as always. England though need the lower-order to click. In a stark contrast from the 2018 series where they played a crucial role in the series win, the English lower-order (7-11) has averaged just 10.04 in this series.

Jos Buttler, who endured a tough time in the series averaging 14.40, will miss the fourth Test to attend the birth of his second child. In his absence, Jonny Bairstow will take up the keeping duties. Ollie Pope or Dan Lawrence might replace Buttler.

Mark Wood and Chris Woakes have regained fitness and one of them might replace Sam Curran who hasn’t had quite an impact in the series so far, averaging 79.33 with the ball and 18.50 with the bat.

England might ponder resting James Anderson or Ollie Robinson to manage the workload as they have played all three Tests so far. But given the form the two pacers are in, it will be a difficult decision to make.

India haven’t had the best of times at The Oval. They have won just one of the 13 Tests, lost five and drawn seven. The sole win came way back in 1971 when the Ajit Wadekar led team beat the hosts by four wickets. They have lost their last three matches at this ground, two of them by an innings. India will however take some confidence from the fight they put in at this venue on their last tour.

India would be wary of the fact that they were in a similar position in 2014 when they had won the Lord’s Test to go 1-0 up in the series but then capitulated to lose the series 1-3. Gaining back the momentum will be crucial.

England have won their last three matches at The Oval, beating South Africa, India and Australia. They will aim to carry forward the momentum from Headingley and make it four in a row while India would look to channel that hurt positively and bounce back hard to register a win at the venue for the first time in 50 years. The Oval is all set for another exhilarating battle.

Denial of responsibility! TechiLive.in is an automatic aggregator around the global media. All the content are available free on Internet. We have just arranged it in one platform for educational purpose only. In each content, the hyperlink to the primary source is specified. All trademarks belong to their rightful owners, all materials to their authors. If you are the owner of the content and do not want us to publish your materials on our website, please contact us by email – [email protected]. The content will be deleted within 24 hours.
channelCombinationenglandFirstcricketFirstpostFocusHeadingleyhurt
Share