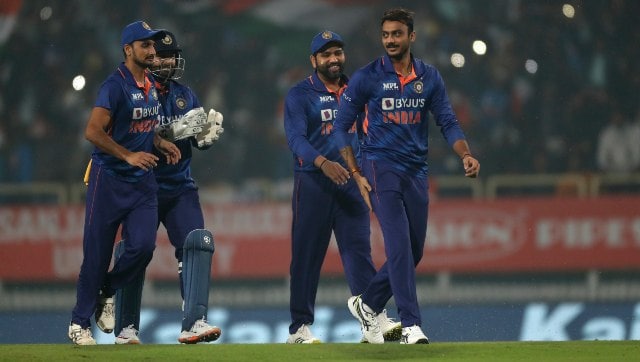 If the bilateral series win against T20 World Cup finalist New Zealand is any consolation for the early exit from the mega ICC event, then India has already achieved that target.

Coming close on the heels of the T20 World Cup, the series were skipped by stalwarts like Virat Kohli and Kane Williamson to focus on two-match Test series starting 25 November. The final T20I game of the series will be played in Kolkata on Sunday. It is a dead rubber, and yet it has its own significance.

India could bring in Avesh Khan and Ruturaj Gaikwad in the final T20I. AP Photo

India’s exit from the Super 12 stage of the T20 World Cup was a result of their tardy batting and the lackadaisical approach of the bowlers. However, the silver lining is that there’s another World Cup in just less than 11 months and every T20I India plays in the run up to the showpiece event will be seen as an opportunity to prepare for redemption.

Top players pulling out from the series gave India a chance to test players like Deepak Chahar, Axar Patel, Mohammed Siraj, Shreyas Iyer and Venkatesh Iyer — all of them were not a part of the World Cup squad. Bowler Harshal Patel— the highest wicket-taker of IPL 2021 — also made his debut in the second match and returned with figures of 2 for 25, winning him the Player of the Match award.

With figures of 2/23 and 1/19, Ravichandran Ashwin continues to impress on his return to white-ball cricket.

In the final game, Rohit and the management could hand a debut to pacer Avesh Khan and give Ruturaj Gaikwad a look in. Yuzvendra Chahal and Ishan Kishan are too looking for an opportunity against the Kiwis.

KL Rahul, who is also a part of the Test squad, could be rested in favour of Gaikwad who was the standout player for Chennai Super Kings in the IPL 2021. Similarly, Avesh could come in for one of the pacers. Ishan Kishan for Rishab Pant is a direct swap and while India have played two finger spinners in the first two matches, playing wrist-spinner Chahal at Kolkata will not be such a bad idea.

However, India may not make wholesale changes considering they are so close to a series sweep opportunity which will give them an edge going into the Test series.

New Zealand will take the field in Kolkata with an aim to avoid a series sweep. Their tempo isn’t the same as that of the World Cup and it’s understandable. The scheduling hasn’t been kind on a team that suffered a heartbreaking loss in the World Cup final just a week ago. However, the Black Caps will have to regroup as a unit and rectify their mistakes from the last two matches to hope for a win on Sunday.

New Zealand were one of the most economic bowling sides in the World Cup but they have failed to replicate the same in this series. They will need the likes of Trent Boult and Adam Milne to perform at their best.

Their top-order gave them strong starts in both the matches but lack of support from middle and lower order meant they never had enough runs on the board. The visitors will be hoping for more runs from Tim Siefert, James Neesham and others to have a chance of beating India.

Denial of responsibility! TechiLive.in is an automatic aggregator around the global media. All the content are available free on Internet. We have just arranged it in one platform for educational purpose only. In each content, the hyperlink to the primary source is specified. All trademarks belong to their rightful owners, all materials to their authors. If you are the owner of the content and do not want us to publish your materials on our website, please contact us by email – [email protected]. The content will be deleted within 24 hours.
aimBenchDominanthostsIndianews updateRohitseries
Share