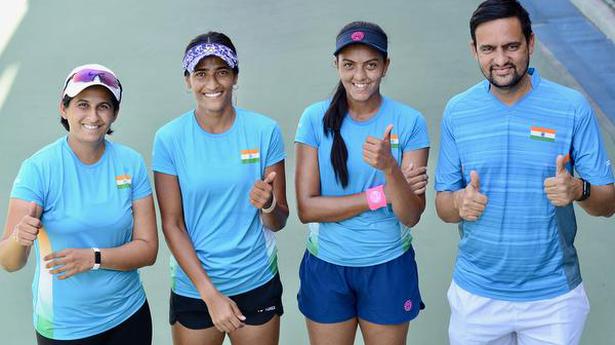 Taking on Latvia in the World Group play-off tie of the Billie Jean King Cup will be a daunting task, but the Indian team views it as a privilege and the best chance to make an impact on the world stage.

Qualifying for the first time for the play-offs was in itself a historic step for Indian women’s tennis.

“The players are excited and hungry to do well. Latvia has top-50 players. We have nothing to lose. We can only gain from this tie,” said captain Vishaal Uppal addressing the media on Friday, before the team’s departure for Latvia.

With Sania Mirza and Ankita Raina training in Dubai and Karman Kaur Thandi training in Germany, the captain felt the team was adequately prepared to play its best tennis on the indoor hardcourts in Jurmala on April 16 and 17.

On Sunday the players will be in isolation and may get to train from Monday.

“We are not getting the indoor facility on Monday. We will figure out our practice,” said Vishaal.

Rutuja Bhosale, who played a significant role in helping the team qualify second behind China, recalled how the team played better after meeting the formidable China in the first tie.

“When there is no expectation, we play good. There is a lot of pride, playing for the country,” said Rutuja.

Zeel Desai said she was thrilled to be just part of the historic moment, and assured she would play her best tennis when called for duty.

“Everything depends on how you play on the day. We are not going to play the reputation of the opponents or their high rank. We will compete as hard as possible,” said Vishaal.

Coach Radhika Tulpule Kanitkar, quite familiar with Ankita and Rutuja in Pune, said she had been following the significant improvement in Indian women’s tennis.

The team is equally excited that the two-day tie would be telecast live in India by EuroSport.

Loading...
Denial of responsibility! TechiLive.in is an automatic aggregator around the global media. All the content are available free on Internet. We have just arranged it in one platform for educational purpose only. In each content, the hyperlink to the primary source is specified. All trademarks belong to their rightful owners, all materials to their authors. If you are the owner of the content and do not want us to publish your materials on our website, please contact us by email – [email protected]. The content will be deleted within 24 hours.
ATPatp live scoresBillie Jean King CupIndianLatvianews updateraringsports news
0
Share

The worst things you can do when shopping for plants, according to plant shop owners