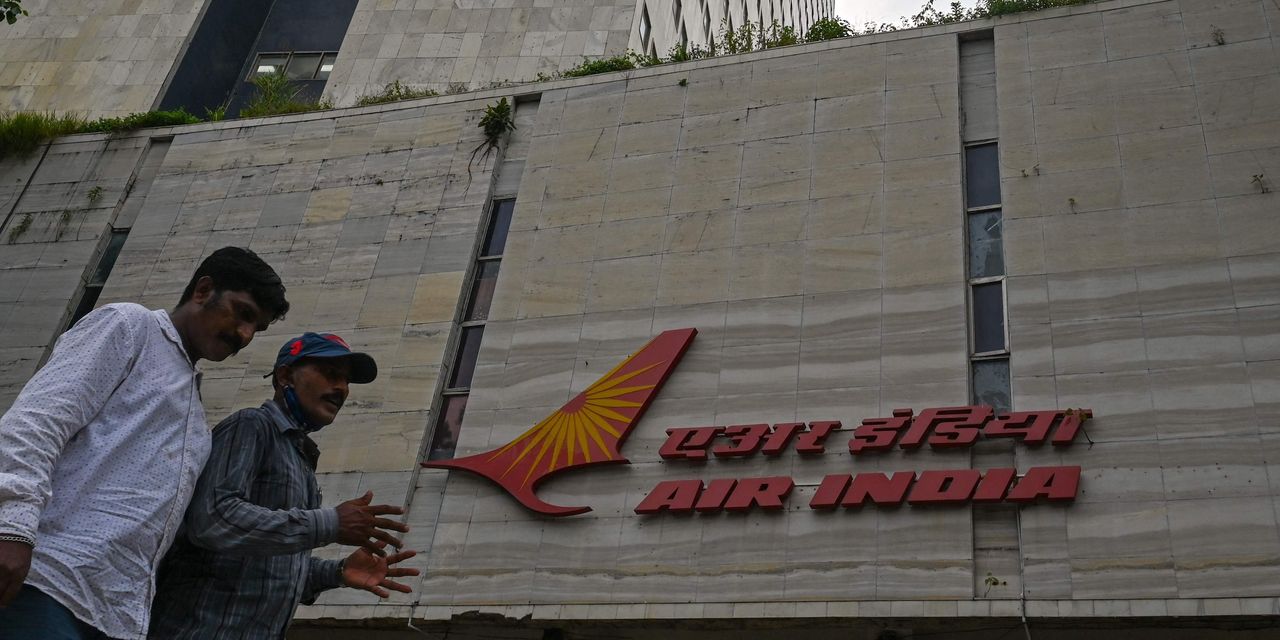 NEW DELHI—India’s Tata Sons is buying the country’s national carrier Air India, returning the airline to its founders and ending a decadeslong struggle by the government to unload the money-losing venture.

Tata Sons, a holding company for India’s biggest conglomerate, is paying 180 billion rupees, equivalent to about $2.4 billion, to buy a 100% stake in the airline, according to a government statement Friday. The deal includes the budget arm Air India Express and a 50% stake in an airport-services joint venture with Singapore’s

The sale is a boost to Prime Minister

efforts to push through market-oriented changes and reinvigorate the economy by selling stakes in debt-laden state-run companies.

“This is the first privatization in more than fifteen years,”

a former top economist with the Modi government, tweeted Friday. “Hope it paves the way for more.”

The Indian government has tried for years to find a buyer for Air India, which is saddled with about $8.2 billion in debt and costs the government nearly $3 million a day to run, according to officials.

In 2018, the government found no takers when it tried to sell off a 76% stake. Then last year, New Delhi sweetened the deal by offering its entire stake in Air India and lowering the amount of debt that would be passed to the new owner.

Tata has agreed to take on about $2 billion in debt and pay about $400 million in cash, according to

the top official at the Department of Investment and Public Asset management. The government will assume the remaining debt.

Airline industry experts say the Indian market is poised for expansion after Covid-19 travel restrictions loosen. Over the past decade, airlines have seen passenger traffic grow by about 10% a year, said Suprio Banerjee, a sector head and vice president at ratings company

Tata operates two airlines in India: the full-service Vistara, in a venture with

and the budget carrier

The deal will return the airline to the Tata group nearly 90 years after it was founded as Tata Airlines in 1932. The government nationalized the airline in 1953, and it began suffering heavy losses after a bumpy merger in 2007 with another state-run carrier, Indian Airlines.

Ratan Tata, the chairman emeritus of Tata Sons, nodded to the historical return of the airline on Friday by tweeting a photo of the company’s former chairman, J.R.D. Tata, standing on a tarmac in front of an Air India plane and a row of flight attendants in colorful saris.

The Tata family, he said, had big plans to restore Air India to its days as “one of the most prestigious airlines in the world.”

“Welcome back, Air India!” he tweeted.

Denial of responsibility! TechiLive.in is an automatic aggregator around the global media. All the content are available free on Internet. We have just arranged it in one platform for educational purpose only. In each content, the hyperlink to the primary source is specified. All trademarks belong to their rightful owners, all materials to their authors. If you are the owner of the content and do not want us to publish your materials on our website, please contact us by email – [email protected]. The content will be deleted within 24 hours.
acquisitionsAcquisitions/MergersAcquisitions/Mergers/ShareholdingsairAir IndiaAir Transportairlinesairports
Share

With Textbook Win, the Astros Take a Commanding Series Lead

Call My Agent Bollywood trailer pits Richa Chadha and Ali Fazal against each other, has cameos galore