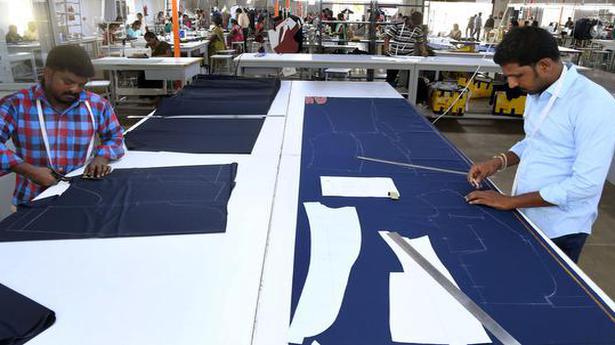 The Centre’s notification of higher GST rates for several textile and apparel items from January 2022, has come as a blow to micro, small and medium-scale textile and clothing units, with industry groups asserting that the move will push up prices for consumers and spur inflation.

In an industry, where almost 80% of the units are in the MSME segment, fixing the rate at 12% for fabrics and garments will only lead to higher prices for the common man, said Sanjay K. Jain, Chairman of the Textiles Committee of the Indian Chamber of Commerce.

Mr. Jain said that with the notification, the manmade fibre (MMF) sector would face a 12% rate from fibre to garments, while the cotton sector would have 5% tax on cotton and yarn and 12% for fabrics and garments.

“The industry and the market can absorb 3% to 4% hike. But 7% is too steep and sudden. It is the MSME units that make the low-cost garments mostly and these units may suffer from drop in demand. In the long run, many units in the unorganised sector may move out of the GST net,” he remarked.

While the notification, issued late on Thursday, was based on the recommendations of the GST Council and therefore not a complete surprise, industry groups were disappointed that their representations to the government to maintain status quo or bring the entire textile supply chain under 5% rate had not been heeded, Mr. Jain added.

Clothing Manufacturers Association of India Chief Mentor Rahul Mehta said the notification was both, ‘disappointing and distressing’. The move would lead to higher prices for the end consumer at a time when high raw material costs had already impacted prices. The industry had made several representations to the government in the last two months to not change the rates and would continue to do so, he added.

While the Southern India Mills’ Association chairman Ravi Sam and Confederation of Indian Textile Industry chairman T. Rajkumar welcomed the move to set right the inverted duty structure for the MMF sector, Mr. Sam said the government should not have changed the rates for the cotton sector.
K.E. Raghunathan, convenor of the Consortium of Indian Associations, said the government appeared to have followed a carrot and stick approach. While it announced Production Linked Incentive scheme for the sector, it had increased the GST rates by 7%. “A master stroke to penalise both consumer and the manufacturer in one shot,” he remarked.

Industry sources observed that almost 90% of fabric production in the country was in the unorganised sector. Increasing the rate to 12% for fabrics would hit the power loom and handloom weavers. The textile sector was certain to require additional working capital now, they added.

Denial of responsibility! TechiLive.in is an automatic aggregator around the global media. All the content are available free on Internet. We have just arranged it in one platform for educational purpose only. In each content, the hyperlink to the primary source is specified. All trademarks belong to their rightful owners, all materials to their authors. If you are the owner of the content and do not want us to publish your materials on our website, please contact us by email – [email protected]. The content will be deleted within 24 hours.
centreclothingdisappointmentEducation newsEducation updateexpressesGoods and services taxGST
Share

How nurses learn to assess pain levels in infants