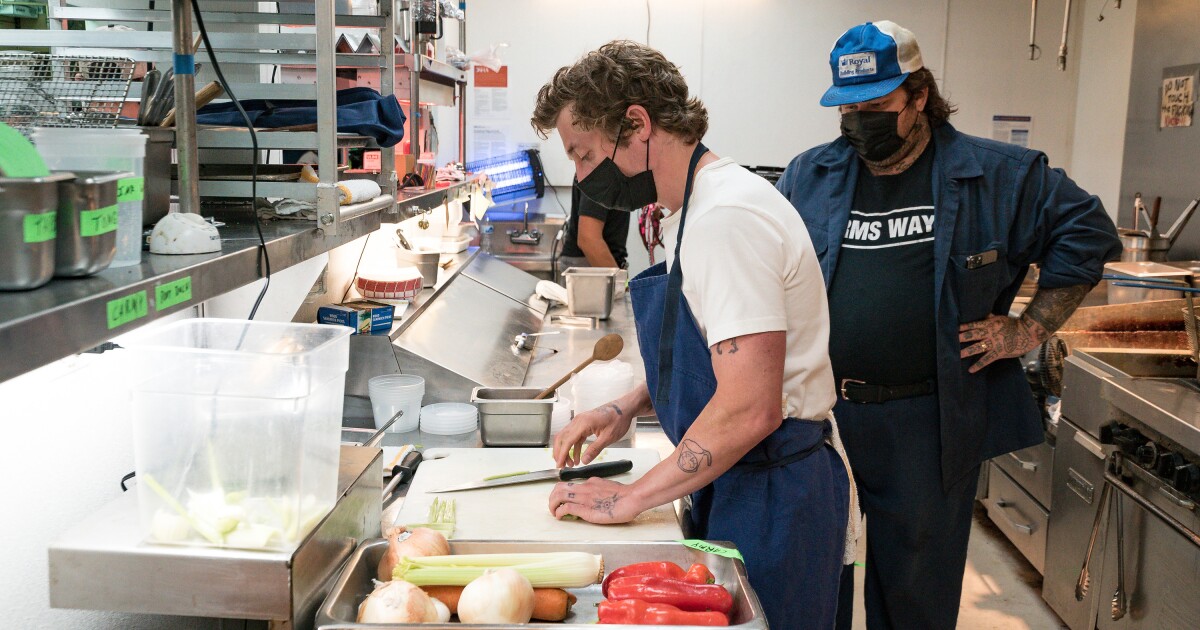 The world of “The Bear” is built from the kitchen up.

Premiering Thursday, the FX series dives headlong into the frenetic pace of life in a professional kitchen as prodigal son and chef, Carmen “Carmy” Berzatto (“Shameless” star Jeremy Allen White), returns from one of New York’s most lauded fine-dining institutions to take over his family’s Italian beef sandwich shop in Chicago. It’s a whirlwind reflection of grief and growth inside the powder keg of a cramped kitchen, brought to life with insights from professional chefs, the show’s creator and months of staging — or training — within restaurants.

In the wake of his brother’s death, Carmy leads a cast of old-school sandwich employees in building a new, more technique-driven the Beef, and to capture the culinary chops of a chef who’s dedicated his life to the gospel of Noma, the French Laundry and Eleven Madison Park , White needed all the help he could get.

“‘We have to get Jeremy into the kitchen,’” said writer and director Joanna Calo of the series’ top priority. “We didn’t entirely know if it was possible, but that was really the dream, as if you’re doing a movie where people are doing a dance or people are ice skating — you’d love to not have to cut away.”

Authenticity was central to series creator Chris Storer (“Ramy,” “Eighth Grade”), who is not only an avid cook himself, but has long been drawn to depicting the culinary arts as well; previous projects include a short-form documentary with Thomas Keller, as well as a documentary on Roy Choi and Daniel Patterson’s community-minded restaurant, Locol. His sister, Courtney Storer — former chef of Jon & Vinny’s — served as a culinary producer.

“He wanted to make a show that was true to back-of-house, that was true to the culinary world, and he knew that in order to do that everybody needed to train,” White said. “It’s incredibly important for chefs, cooks, people that work in kitchens and restaurants that it all rings true. I think we’ll both be able to pat ourselves on the back a little bit if we can walk into restaurants and get some nods from the line cooks.”

While Lionel Boyce, who plays Marcus, the Beef’s bread baker turned pastry head, staged at Copenhagen’s Hart Bageri, White enrolled in a two-week crash course in Pasadena’s Institute of Culinary Education along with Ayo Edebiri, who plays the pedigreed and driven Beef newcomer Sydney Adamu. They worked privately with the chef-instructor and on Fridays, would join a real cooking class. On the final day, staff asked what White felt he needed and he replied: omelets, one of the cooking’s most deceptively simple dishes, requiring finesse and technique. With three pans in front of him, he cooked for hours until he ran through 10 dozen eggs. He said he made roughly 120 omelets that day, and they’ve since become a favorite with his wife and two daughters at home.

White’s first visit after graduation was to all-day patisserie, cafe and French-inspired restaurant République, and it didn’t go as planned: He immediately felt overwhelmed by the size and the scope of it. He lasted one day.

“I didn’t realize how much they were doing every day,” he said. “That restaurant and kitchen is really only empty for maybe two hours a day, and so I was just having a lot thrown at me at once. They were all lovely and supportive, but it seemed too big for me to even find a place for myself to study.”

White found his place and his rhythm at Pasjoli, a Michelin-starred French bistro in Santa Monica helmed by a chef-owner with experience of his own in Chicago’s rarefied culinary circles. Chef Dave Beran came up in some of that city’s most esteemed kitchens, cooking his way through MK the Restaurant, Tru, Alinea and its sister restaurant, Next, before moving to Los Angeles in 2017. It was Storer, having dined and chatted with Beran at his previous L.A. spot, Dialogue, who reached out about White’s potential to stage in preparation for the role.

“We basically treated him as though he were any cook that were coming in here, and in their first two weeks of training [they] learn how to run a station,” Beran said. “Our goal was to make him somewhat proficient enough that we would consider hiring him.”

It’s the first time Beran has ever trained an actor. He started White with something simple: prepping mirepoix for stocks and sauces, where clunky knife cuts could be hidden a little more than, say, in an entrée or salad. He worked nearly two weeks over the course of months, shot the pilot, then returned before the rest of the season was filmed. While the team was welcoming, it was, he admits, humbling.

“One day I was cutting carrots or scallions or something like that, and I was cutting in front of this line cook and she was kind of watching me out of the corner of her eye,” White said. “I could tell she was judging me, and I said, ‘Oh, no. I’m not a cook. I’m an actor.’ And she goes, ‘I know. I can tell.’ It was very clear that I was a tourist.”

But on his last two nights at Pasjoli, White was turning out entrées, stationed between Beran and one of his sous-chefs — “You just kind of put him where you can keep an eye on him” — and cooking for a few friends who’d come in to dine and cheer him on. Beran swears White must have come away with more than a few tiger stripes, or scars, from scalding his arms on the oven and the grill in his time with them.

Much of White’s training at Pasjoli went beyond cooking; Beran made it clear that a chef’s tells are not limited to what arrives on the plate. The performance could be made more authentic by replicating quirks such as Thomas Keller’s tapping his wooden clogs together, or Grant Achatz standing in the corner, arms crossed and chin in hand, staring down the line while thinking. (Beran twirls his spoon.)

Even the method of holding a spoon is a tell, Beran said: Fine-dining chefs will often poise spoons as if holding a pencil or pen — not bear-pawing it — which gives more control while saucing. These traits are learned through years of experience, whereas White had just months. Understanding that weeks spent training in kitchens around the country could never instill the years of practice of a professional chef, White — who also worked with Chanterelle’s David Waltuck in New York and spent a weekend at Kumiko in Chicago — made mental notes of what he could cheat and when: “If it’s the cameras kind of floating around the kitchen, following different people, I will be a bit gentle with myself and kind of fake when I can,” he said. When it came to closeups of his hands chopping, though, he had to be on.

The balance between television magic and culinary authenticity extends to the set as well: The production team recreated the somewhat cramped kitchen of Chicago’s famed Mr. Beef on Orleans sandwich shop, where the pilot was filmed, on a stage. Minute changes allowed for more space for the camera equipment, but it’s still one continuous room and still close quarters — a necessity for building tension between the characters.

To glean the life of a chef beyond the Storers’ experiences, professional chefs stopped by the writers’ room for virtual Q&As, where they answeredquestions like, What are chefs’ hours? What about the dynamics within the kitchen? What do they look like after a long shift?

Calo likens the collaborative process to the arc of the show, wherein the Beef’s chefs, in all their idiosyncrasies and various phases of training, begin working in tandem for a outcome greater than the sum of a sandwich shop’s parts.

The result is a level of detail perhaps perceptible only to those who’ve poured themselves into the hospitality industry: Pepto Bismol and bottles of Fernet placed atop unpaid bills on a desk; a family meal servedout of plastic halfquart containers for storage and takeout;; margins so thin that the revenue from the coin-operated arcade cabinets could mean the difference between paying for your meat supply or going without.

Almost no chef contributed to the show’s depiction more than cookbook author, restaurateur and bombastic host, Matty Matheson, who served as a co-producer in addition to appearing on screen. Bringing the excitable, positive, borderline-erratic energy to “The Bear” that helped catapult his own cooking shows to international fandom, social media superstardom and a slew of brand collaborations, Matheson, who plays handyman Neil Fak, helped demonstrate cooking procedure and method, aiding and bettering White — sometimes a little too enthusiastically.

“Cameras roll and I’m starting to do my own thing, he’s watching camera, he’ll say, ‘Stop.’ He’ll come in, he’ll do some more cooking,” White said. “But then a couple of times, he would be like, ‘No, you want to do it like this,’ and he would cook something from beginning to end — because that’s his nature — and then I would have to tell him, ‘Hey, man, like, we don’t have a lot of these. I do need to do this for camera. Just give me some pointers but please don’t cook the whole thing.’”

White said he relied heavily on both Matheson and Courtney Storer to correct him, asking them to watch the monitors and call cut if one of his gestures felt forced, out of place or inauthentic — and they called him on it with grace time and again.

Next time around, there might be fewer reasons to call “cut.” Should “The Bear” be greenlit for a second season, White plans to improve his skill set by returning to Pasjoli for an entire month of staging. Beran says he’s welcome any time — and he’ll work even harder.

“He’s got an open door,” Beran said. “He worked hard. He wasn’t someone who was just in the way, observing. Honestly, if he wants to spend a month here doing it, we’ll put him on the schedule and we’ll really have him work in the kitchen.”

When: Any time, starting Thursday

Denial of responsibility! TechiLive.in is an automatic aggregator around the global media. All the content are available free on Internet. We have just arranged it in one platform for educational purpose only. In each content, the hyperlink to the primary source is specified. All trademarks belong to their rightful owners, all materials to their authors. If you are the owner of the content and do not want us to publish your materials on our website, please contact us by email – [email protected]. The content will be deleted within 24 hours.
Bearsentertainment newsEntertainment updatekitchensMichelinstarrednews updateplanRestaurant
Share