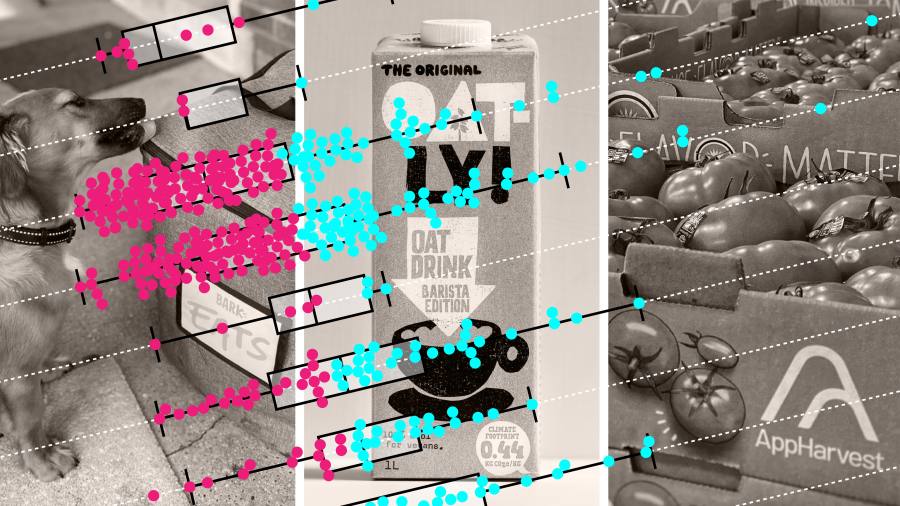 When Bark, Inc — then called The Original Bark Company — made its stock market debut via a $1.6bn merger with a blank-cheque company in June, its shares popped 7.5 per cent and its chief executive was bullish.

“There are 63m households in the US [with dogs] and we are in 1.8m,” said Manish Joneja, chief executive of the group, which distributes monthly subscription-based themed dog toy and treat boxes under the name BarkBox. It is currently offering a Spider-Man-themed selection.

Yet since listing, shares in Bark have dropped more than 65 per cent — and it is not alone. After a record year for IPOs globally, a series of freshly listed high-profile consumer companies have found their stock prices underwater as the market turned sour on their growth prospects.

Oat milk brand Oatly, indoor farming business AppHarvest, ethical egg producer Vital Farms, baby and beauty brand The Honest Company and UK ecommerce group THG have all listed in the past 18 months, and all are trading at least 50 per cent below their listing prices, despite a steady rise in the S&P 500 index. All but London-listed THG are traded on US markets.

Plant-based convenience foods maker Tattooed Chef merged with a special purpose acquisition company, or Spac — a device also used by AppHarvest — in October 2020 and its shares have since declined more than 40 per cent. Smaller UK-based Revolution Beauty has shed almost a third of its market value since listing in July.

As venture capital funds created a series of tech “unicorns” there has also been a rapid inflow of cash into early-stage or privately owned consumer companies, including from investors better known for their tech holdings. PayPal co-founder Peter Thiel invested in AppHarvest in 2020, according to Dealroom, for example.

Some groups listed amid a wave of enthusiasm for pandemic-era trends, from petcare to convenience foods, subscription models and the ecommerce boom. Many are cast as disrupters to existing industries but may have only vague plans for reaching lasting profitability, said Isenwater, who added that he had held off investing in any of the recent listings.

“[The falling share prices] are definitely the market scrutinising some of these businesses harder than it was before,” he said.

There are company-specific reasons why investors soured on some of the newly public groups. THG’s shares plunged in October after short sellers questioned the value of its white-label ecommerce proposition, Ingenuity, and an investor day seen as an attempt to reset negative commentary backfired.

Oatly and AppHarvest both fell foul of supply chain problems, which cut into expected margins — a particular problem for AppHarvest, which operates in a notoriously narrow-margin field.

But Will Hayllar, managing partner at strategy consultants OC&C, said there were broader questions about whether propositions that looked seductive to IPO investors were genuinely suited to significant expansion.

“The real questions to ask are about both how scaleable is this proposition and how quickly can it scale? How relevant is what’s being offered to a wide swath of people?” he said.

“Sometimes the danger is that it looks like it is the perfect solution for . . . affluent metropolitan city dwellers, and that probably reflects the people in the financial services industry who are steering the IPOs. But does that work for the more representative population in countries around the world?”

There are also question marks around the capacity for companies like Oatly and Tattooed Chef to compete in the long term with multinational food groups, which can deploy multibillion-dollar marketing budgets and frequently buy up smaller companies in fashionable product areas.

Isenwater says the threat to consumer multinationals from start-ups “has been massively blown out of proportion” — though he does cite Oatly as one of the few smaller companies to have brought genuine disruption to an established consumer market.

Consumer staples lack “network effects”, while “nor are there opportunities to create enormous quasi-monopolies in the mould of Amazon, Google or Facebook”, he said.

Mark Lynch, partner at the corporate advisory boutique Oghma Partners, said: “Investors have applied a mindset which could be right in the tech world but isn’t really right in the world of food and branded food.”

On plant-based foods, for example, he argued, “If there isn’t much technological knowhow in these products, and generally there isn’t, it’s quite difficult to defend yourself against somebody like a Nestlé or whoever it might be if they turn their attention to the market.”

Isenwater acknowledges that some of the lossmaking groups will go on to be “great businesses”. And not all recent consumer listings have entered a decline. Haircare group Olaplex, which debuted on the Nasdaq exchange in September, is trading more than 9 per cent above its listing price. But that group is already profitable, reporting $39m of net income on $282m of revenues in 2020.

For some groups, proving a post-pandemic business model is another challenge, after Covid-19 restrictions boosted groups catering to homebound consumers. Bark’s second-quarter results were below expectations, for reasons including rising costs of customer acquisition and higher churn rates among subscribers because of “the surge in customers that we acquired during Covid last year”.

Parsley Box, a meal subscription business that listed on London’s junior market in April, has since shed more than 80 per cent of its market value. Convenience foodmakers like Tattooed Chef, also viewed as pandemic winners, have faced similar pressure.

Intent on showing investors it is more than a novelty or a pandemic play, Bark is branching out into dog dental care and tailored pet food. At its latest results, Joneja maintained: “There are a lot of exciting things happening in Bark.”

Denial of responsibility! TechiLive.in is an automatic aggregator around the global media. All the content are available free on Internet. We have just arranged it in one platform for educational purpose only. In each content, the hyperlink to the primary source is specified. All trademarks belong to their rightful owners, all materials to their authors. If you are the owner of the content and do not want us to publish your materials on our website, please contact us by email – [email protected]. The content will be deleted within 24 hours.
Beatbusiness newsBusiness updateInvestorsnews updatepandemiceraretreattechi live
Share

GameStop Is Building Its Own Crypto Token GME and NFT Marketplace