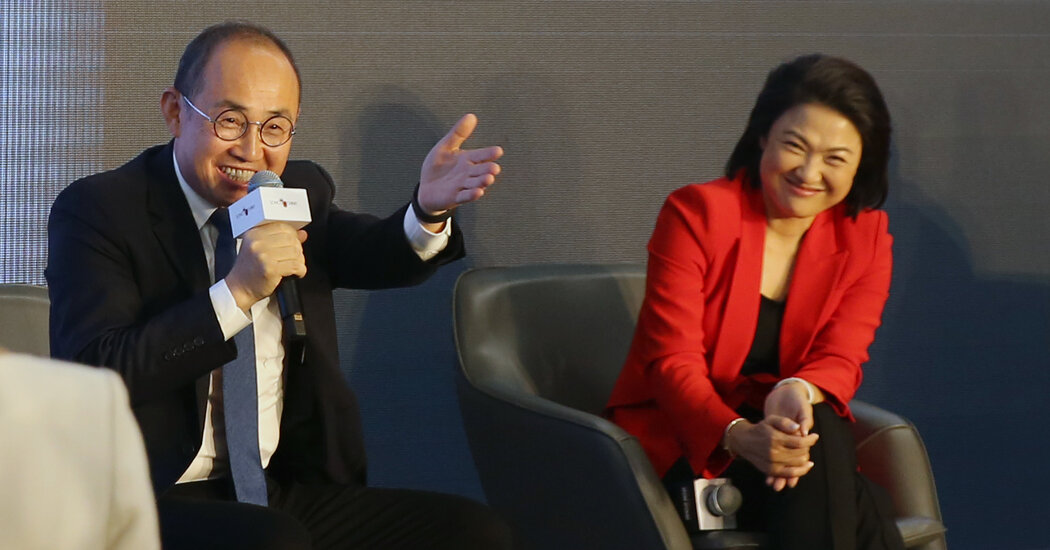 Investors panic as Blackstone walks away from a China real estate deal.

Shares of Soho China, a real estate company run by a prominent power couple, fell by one-third on Monday after Blackstone Group walked away from its deal to buy the firm.

Soho China said in a joint filing late on Friday that Blackstone would not go through with its $3 billion bid for a controlling stake in the company, without giving a reason. Blackstone, the Wall Street investment giant, and Soho China declined to comment further on Monday.

The company is controlled by Zhang Xin and Pan Shiyi, a married couple who share the title of executive director. Mr. Pan, who is chairman, was one of the first Chinese entrepreneurs to use social media for public relations and has tens of millions of followers online. Ms. Zhang is well known in part for her role in a 2013 deal to buy a stake in the General Motors Building in Manhattan.

The news comes as China’s most successful business tycoons come under scrutiny and growing pressure to share more of their wealth. The deal, which would have been among the real estate sector’s biggest, was announced in June, with a regulatory review pending. It was seen as a move by the husband-and-wife team to reduce their exposure to China.

A deal for Soho China could have also shored up confidence in the country’s real estate sector, which, after years of remarkable growth, is coming under greater regulatory scrutiny as Beijing tries to put a stop to corporate binge borrowing. Developers have been forced to start paying off mounting bills under new central bank rules, called the “three red lines.”

Evergrande, China’s biggest developer, has spooked investors, home buyers and experts who are predicting a bankruptcy in the near future.

In recent weeks, real estate prices and demand in some of China’s biggest cities has started to weaken. A prominent Beijing think tank last week said the sector had “shown signs of a turning point.”

Real estate woes, plus reports of greater regulatory tightening in mainland China, contributed to a drop of nearly 2 percent in Hong Kong shares on Monday.

More than 500,000 student borrowers — with nearly $10 billion in student loan debt — had their loans erased this year, Stacy Cowley reports for The New York Times.

President Biden has so far fended off calls for the kind of blanket debt cancellation that is a top priority of many progressive lawmakers, but a parade of relatively modest eligibility and relief enhancements adds up to a significant expansion of support for beleaguered borrowers. And more may be coming: The Education Department said it was planning regulatory changes to programs aimed at helping public servants and those on income-driven repayment plans.

There is plenty of incentive for the federal government — the primary lender for Americans who borrow for college, holding $1.4 trillion in debt owed by 43 million borrowers — to fix faltering relief programs soon. Since the pandemic took hold in March 2020, virtually all of those loans have been on an interest-free pause, which is scheduled to end Jan. 31. And every loan discharged is one fewer for the agency to service.

The department’s actions so far have generated little controversy — few oppose giving military personnel, disabled borrowers and defrauded students the relief to which they’re legally entitled — but the idea of more broadly canceling student debt is a lightning rod. Republicans dislike the idea of saddling taxpayers with the cost, and its critics on the left see it as a subsidy for those with expensive professional degrees.

“Our overall goal is permanent change,” said Kelly Leon, an Education Department spokeswoman. “We are building a student loan system that works for borrowers and provides them the relief authorized by Congress that has proven elusive for far too long.”

The push for widespread debt cancellation has overshadowed calls to mend glaring administrative problems that urgently need to be addressed, advocates say. READ THE ARTICLE →

Fannie Mae, the federally backed institution that buys mortgages from the banks, plans to peer into many people’s bank accounts — with their permission — for a record of regular rent payments to help assess qualification for mortgages.

Its data showed that only 17 percent of people who had not owned a home in the previous three years and would not have qualified for a mortgage before might do so now. But those 17 percent are drawn from a group that is disproportionately people of color, many of whom have limited credit histories and come from marginalized groups on the wrong side of a decades-long wealth gap.

Fannie Mae effectively sets many of the standards for who qualifies and what data counts, and until now, rent has not counted, despite it being the largest payment most renters make each month. For many years now, consumer advocates and industry insiders alike have agreed that this is not how things should be.

The convoluted, multistep process that Fannie is using will mean many people won’t benefit from it at first. The New York Times’s Your Money columnist, Ron Lieber, takes a look →

Denial of responsibility! TechiLive.in is an automatic aggregator around the global media. All the content are available free on Internet. We have just arranged it in one platform for educational purpose only. In each content, the hyperlink to the primary source is specified. All trademarks belong to their rightful owners, all materials to their authors. If you are the owner of the content and do not want us to publish your materials on our website, please contact us by email – [email protected]. The content will be deleted within 24 hours.
Loading...
BlackstoneChinadealEducation newsEducation updateestateInvestorsnews update
Share