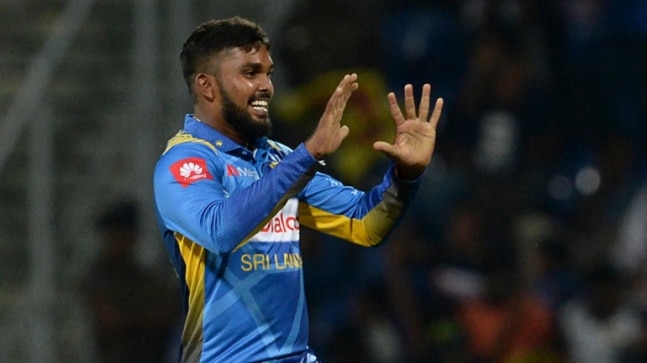 IPL 2021: Wanidu Hasaranga reacts to signing up for RCB – Honoured and thrilled at once

Sri Lanka’s highly-rated leg-spinner Wanidu Hasaranga has expressed delight at joining Royal Challengers Bangalore for the remainder of the Indian Premier League 2021 season, starting September 19 in the UAE. Taking to social media, Hasaranga said he is honoured to be part of Virat Kohli-led RCB in the IPL.

“From sitting at home and watching them, to being a part of an amazing team. I am excited, honoured and thrilled all at once,” Hasaranga said.

Hasaranga has been in fine form in the shortest format of the game. He played an influential role in helping Sri Lanka beat India at home last month. The leg-spinner picked up 7 wickets in 3 matches as Sri Lanka beat a Shikhar Dhawan-led Indian side 2-1 in a 3-match T20I series.

Head coach and Director of Cricket Mike Henson though pointed out that Hasaranga had been in RCB’s radar for quite sometime and his selection had very little to do with the performances against India.

“It’s certainly not a recency factor and we certainly not surprised by his success in recent times. We like his skill-set. We like the fact that he is multi-skilled cricketer and offers to bat deep as well if we plan to play an overseas spinner along with Chahal.

“That gives us an exciting option. The fact that he performed against India is great but not surprising at all,” Henson said on Saturday.

Meanwhile, RCB also announced that head coach Simon Katich had pulled out of the remainder of IPL 2021 due to personal reasons and that Henson would double as the head coach of the team.

RCB, who are at the 3rd spot of the 8-team points table with 7 wins in 10 matches, will resume their campaign against Kolkata Knight Riders on September 20 in Abu Dhabi.

Denial of responsibility! TechiLive.in is an automatic aggregator around the global media. All the content are available free on Internet. We have just arranged it in one platform for educational purpose only. In each content, the hyperlink to the primary source is specified. All trademarks belong to their rightful owners, all materials to their authors. If you are the owner of the content and do not want us to publish your materials on our website, please contact us by email – [email protected]. The content will be deleted within 24 hours.
HasarangaHonourediplnews updateRCBreactssigningsports news
Share

‘The Empire’ to ‘See Season 2’: Here’s what you can stream on OTT this week