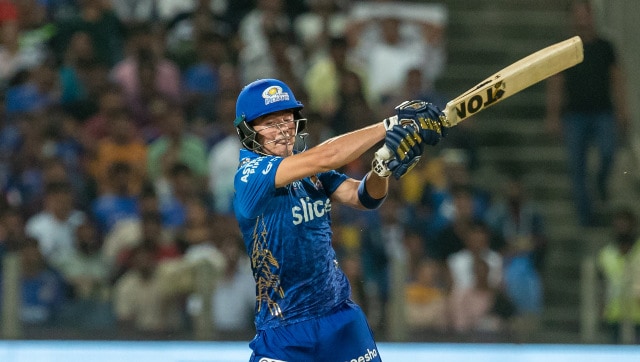 Mumbai Indians suffered their fifth consecutive loss after they were beaten by Punjab Kings at the Maharashtra Cricket Association on Wednesday, 13 April. But Mumbai were delighted after watching the volcanic innings of  Dewald Brevis. The 18-year-old South African batter smashed spinner Rahul Chahar for one boundary and four consecutive maximums in the 9th over of MI’s innings.

The match began with Mumbai skipper Rohit Sharma winning the toss and sending the visitors to bat first. Punjab Kings put up a total of 198 runs in 20 overs as both Mayank Agarwal and Shikhar Dhawan were outstanding with the bat. In reply, the Mumbai brigade lost a couple of early wickets. Skipper Rohit Sharma and Ishan Kishan headed back to the pavilion after adding only 32 runs to the scoresheet.

Then two youngsters, Tilak Varma and Dewald Brevis, took the responsibility for turning the tide in MI’s favour. But they were both seen struggling while playing Vaibhav Arora, who took Ishan Kishan’s wicket. Finally, Brevis opened his account with two back-to-back boundaries. However, it was just the start of his brilliant show.

In the 9th over of the game, Rahul Chahar came to deliver and on the first delivery, Tilak Varma passed the strike to Brevis. On the second ball, Dewald Brevis rocked onto the back foot to smash the ball for a boundary. What followed in the next few balls will be remarkable for a long time in the history of the Indian Premier League.

On the third delivery of the over, Brevis pulled off a straight drive to smack the ball into the sightscreen. He paid no attention to Chahar as he successfully converted the last three deliveries into sixes. Going down on his knee, ‘Baby AB’ dragged the sixth ball over the wide long-on with a smooth swing of his bat and registered the highest maximum (112 meters) of this IPL season so far. He missed the half-century by a single run and left the crease with 49 runs in 25 balls. His show was laced with a total of 9 boundaries, which included five 6s and four 4s.

Pune was stunned after watching the devastating innings of the youngest player of this season. Dewald Brevis has already got the moniker of ‘Baby AB’ as his footwork and batting technique seem very similar to his country’s legend AB De Villiers.

Former Indian batter Suresh Raina, along with other cricket fans, took to Twitter to embrace the young man for his stunning display of batting and tagged him as ‘one of a kind’.

Here are some reactions:

However, Brevis’ knock could not bring the first victory for his side as Mumbai Indians lost the match by 12 runs.

Denial of responsibility! TechiLive.in is an automatic aggregator around the global media. All the content are available free on Internet. We have just arranged it in one platform for educational purpose only. In each content, the hyperlink to the primary source is specified. All trademarks belong to their rightful owners, all materials to their authors. If you are the owner of the content and do not want us to publish your materials on our website, please contact us by email – [email protected]. The content will be deleted within 24 hours.
AppreciationBabyBrevisChaharconsecutiveDewaldFirstcricketFirstpost
Share