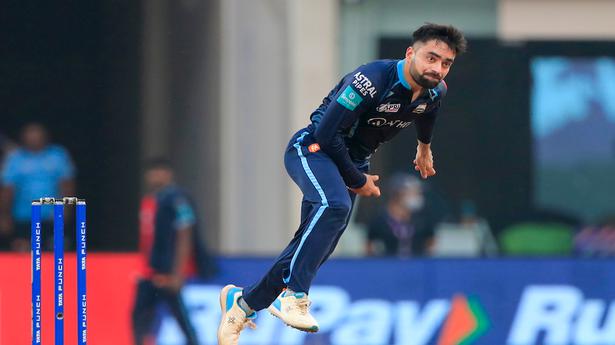 Rashid has so far claimed 11 wickets from as many games at an economy rate of 6.84

Rashid has so far claimed 11 wickets from as many games at an economy rate of 6.84

Rashid Khan is enduring an ordinary IPL this year with the ball in terms of wickets, but the Gujarat Titans spinner is not too bothered about the scalps as long as he can produce economical spells for his team.

Rashid has so far claimed 11 wickets from as many games at an economy rate of 6.84, figures which definitely won’t please him much.

But the star Afghan cricketer has taken it in stride.

“While bowling in T20s it’s always great to take wickets but for me, it’s a bit different because I always focus on economy and that is something which puts pressure on the batters,” Rashid said at the post-match virtual press conference after GT’s five-run loss to Mumbai Indians on Friday.

“But definitely compared to other IPLs, got less wickets this year. In a couple of games I didn’t bowl as good as I should have. But that’s T20, there is so much for you to learn.” Rashid had a good game against MI, picking up 2 for 24 besides collecting three catches.

But it was not to be GT’s day as needing nine runs in the final over, they couldn’t finish off the chase.

“Hardik and (Rahul) Tewatia’s run outs were the game changers. That is the beauty of T20 sometimes you can score 9 off 2 balls and sometimes you fail in scoring 9 off 6 balls,” Rashid said.

“There is a lot to learn, not to repeat the negative things which we did in the last few games.”

MI pacer Daniel Sams, who defended nine runs in the last over, said he was just trying to bowl his best balls.

“I was looking to bowl my best balls in the final overs, kind a change the length a little bit, keep the ball away and bowl nice and slow and got a little bit of dip.

“For me it was a good time to reflect on my performances, what I do really well and execute those on the ground,” said Sams, who finished with figures of 0/18 from his three overs.

Denial of responsibility! TechiLive.in is an automatic aggregator around the global media. All the content are available free on Internet. We have just arranged it in one platform for educational purpose only. In each content, the hyperlink to the primary source is specified. All trademarks belong to their rightful owners, all materials to their authors. If you are the owner of the content and do not want us to publish your materials on our website, please contact us by email – [email protected]. The content will be deleted within 24 hours.
economyFocusGujaratGujarat TitansIndian Premier League 2022iplipl 2022Khan
Share

Your weekly horoscope for May 8-May 15