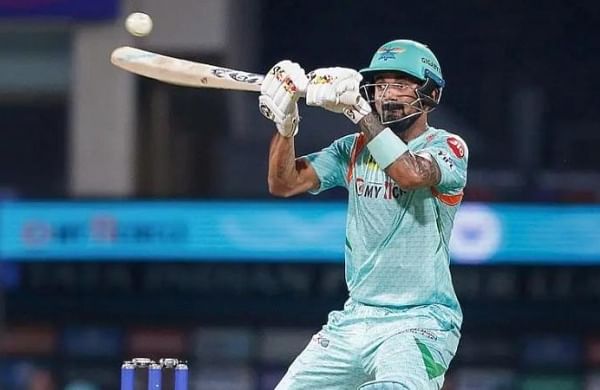 KOCHI:  Two first-ball ducks this season at the Wankhede Stadium, and going up against a largely partisan crowd supporting the ‘home side’, it was easy to question KL Rahul’s mental state ahead of Lucknow Super Giants’ game against Mumbai Indians on Sunday. The answer to that was an exhibition of stroke-play as Rahul once again proved to be a thorn in the flesh for Mumbai and stood between them and a batting meltdown by Lucknow. Even as the rest of the Giants batters toiled, it was another batting masterclass from their skipper.

Rahul struck his second straight century (103 not out) against Mumbai to single-handedly take the Giants to 168 for 6. His knock proved to be a big difference-maker as Lucknow won the match by 36 runs. As for the five-time champions, it was their eighth consecutive defeat, a dreadful run that has certainly ended their hopes of a top-four finish.

When these two teams met earlier this season, there was a lot of debate surrounding Rohit’s decision to hand the new ball to Tilak Varma instead of Jasprit Bumrah against the likes of Rahul and Quinton de Kock. Rahul went on to score a century as Lucknow ran out comfortable winners.

All eyes were on Rohit to see if the skipper would pit Bumrah against Rahul at the start of the innings in a bid to rattle the Giants. It was not to be as it wasn’t Bumrah or Varma here with Daniel Sams opening the bowling. There was no sight of Bumrah who was eventually introduced into the attack in the fourth over and it was an eventful over from the pacer.

Bucking the general trend this season from teams playing Mumbai of taking a cautious approach against Bumrah, Quinton de Kock looked to take on his former teammate. He was handed a lifeline when Varma dropped a routine catch as De Kock was looking to clear the ropes. The South African couldn’t capitalise on the let-off as he ended up getting out in the very next ball. He was caught at short cover by Rohit as Bumrah provided an early breakthrough. However, as far as Mumbai were concerned, they haven’t worked out a way to deal with Rahul who fancies playing against them, and the Lucknow captain was waging a lone battle as wickets kept tumbling around him.

Despite being among the leading run-getters this season, the Wankhede has not been a happy hunting ground for Rahul with golden ducks against Gujarat Titans and Rajasthan Royals here.
Mumbai was keeping a check on the runs with some disciplined bowling and fielding effort with only Rahul finding a way to find the boundaries and keep the scoreboard ticking.

But Mumbai kept finding ways to put the pressure back on their opponents. Even the 13th over from Sams, where he bowled four wides and was smashed for two sixes by Rahul fetched a wicket as Marcus Stoinis departed for a duck. Krunal Pandya departed in the very next over by Kieron Pollard just as Rahul was applying the pressure from the other end.

In reply, Mumbai got off to a decent start but once they lost opener Ishan Kishan in the eighth over, their chase started falling apart as they lost wickets at regular intervals. Dewald Brevis (3), Rohit (39) and Suryakumar Yadav (7) fell in quick succession. Varma offered some resistance with a well-made 38 but that was not enough. Kieron Pollard toiled to reach double-figure (19) mark.

Denial of responsibility! TechiLive.in is an automatic aggregator around the global media. All the content are available free on Internet. We have just arranged it in one platform for educational purpose only. In each content, the hyperlink to the primary source is specified. All trademarks belong to their rightful owners, all materials to their authors. If you are the owner of the content and do not want us to publish your materials on our website, please contact us by email – [email protected]. The content will be deleted within 24 hours.
giantiplkl rahullucknow super giantsMumbaiMumbai Indiansnews updateRahul
Share