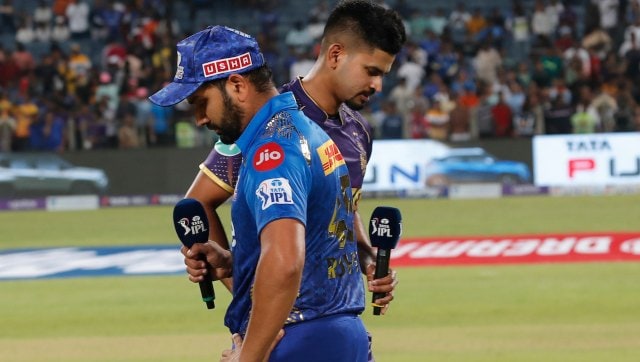 Mumbai Indians, bottom-placed in the IPL 2022 points table, would look to hurt Kolkata Knight Riders’ playoffs chances when the two teams lock horns at DY Patil Stadium on Monday. A defeat today could well push Kolkata out of the race for playoffs.

Rohit Sharma: All eyes will be on the Mumbai skipper who showed his intent in the 28-ball 43 against Gujarat Titans in their last game. Lack of runs from Rohit didn’t give Mumbai the early momentum they were looking for in the tournament and would now hope the captain comes good towards the fag end, and carry the form when he takes over duties for the Indian cricket team.

Andre Russell: With both bat and ball, Russell was the lone bright spot in KKR’s defeat to LSG in their last fixture. It remains to be seen how Shreyas Iyer manages Russell today. The destructive all-rounder is yet to be a consistent operator with the ball. His returns have been nothing but encouraging but Shreyas has been happy to only use him if the regular bowlers experience an off day. Russell has so far picked 12 wickets in just 18.4 overs he has bowled this season. And most of his overs have come at the death. With the wickets becoming two-paced, Shreyas must look to use Russell the bowler smartly today.

Rinku Singh: After years of grind in the domestic circuit and observing IPL proceedings from the dugout, Rinku Singh finally had his opportunity to make a substantial contribution when he played his first game of the season against Gujarat Titans. Chasing a tricky total, the left-hander held one end up and contributed with a crucial 35 but was unable to help his side cross the line in the 157-run chase. He was gun in the field and picked three catches in the deep. A 23 came in the next game vs Delhi Capitals but the impact innings was saved for the Rajasthan Royals where he, along with Nitish Rana, fashioned a brilliant run-chase. Coming into bat at No.5, Rinku hit 23-ball 42 to help KKR chase down 153 with five balls to spare.

M Ashwin: Ashwin was Mumbai’s first-choice spinner before he was replaced by the little-known Hrithik Shokeen. On fresh wickets early in the competition, the purchase wasn’t there for the taking for Ashwin and the spinner managed six wickets in as many outings for the Rohit-led unit. Mumbai then tried Hrithik for three games and even he looked all over the place and made way for Ashwin after managing just two wickets, which came in the 2/47 against Rajasthan Royals. On return, Ashwin looked good against the Gujarat Titans and returned with impressive figures of 2/29. More importantly, he was hit for just one six and bowled as many as eight dot balls against a batting line-up featuring the likes of Hardik Pandya, David Miller and Rahul Tewatia in the middle order.

Narine vs Mumbai middle-order: This is going to be a mouth-watering contest as KKR’s most experienced bowler will be against a formidable Mumbai Indians middle-order. After not-so-consistent returns from the top-order, Mumbai middle-order, led by Tilak Verma and Suryakumar Yadav, have done the job more often than not for the blue brigade. Narine on the other hand has been brilliant for KKR and conceded runs at just 5.22 per over this season.

“He (Venkatesh Iyer) didn’t get as many runs as he would have liked and we were forced to look at some other [opening] options, which is disappointing for someone who has represented India in the last seven-eight months on the back of what was a very good IPL last time in the UAE,” McCullum said after Knight Riders’ defeat on Saturday.

“It was a good time for me to reflect on those games, but also reflect on what I do really well,” Daniel Sams said of the time he spent on the sidelines after Pat Cummins onslaught early in the competition.

Denial of responsibility! TechiLive.in is an automatic aggregator around the global media. All the content are available free on Internet. We have just arranged it in one platform for educational purpose only. In each content, the hyperlink to the primary source is specified. All trademarks belong to their rightful owners, all materials to their authors. If you are the owner of the content and do not want us to publish your materials on our website, please contact us by email – [email protected]. The content will be deleted within 24 hours.
FirstcricketFirstpostiplKKR&KolkatasMumbaiNewsnews update
Share

Mental health tops the list of biggest business challenges for 2022