Notice: amp_is_available was called incorrectly. `amp_is_available()` (or `amp_is_request()`, formerly `is_amp_endpoint()`) was called too early and so it will not work properly. WordPress is currently doing the `pre_get_posts` hook. Calling this function before the `wp` action means it will not have access to `WP_Query` and the queried object to determine if it is an AMP response, thus neither the `amp_skip_post()` filter nor the AMP enabled toggle will be considered. It appears the theme with slug `publisher` is responsible; please contact the author. Please see Debugging in WordPress for more information. (This message was added in version 2.0.0.) in /home/runcloud/webapps/techilive/wp-includes/functions.php on line 5313
 Iraqi militia members surround PM’s office after arrest of commander - TechiLive.in 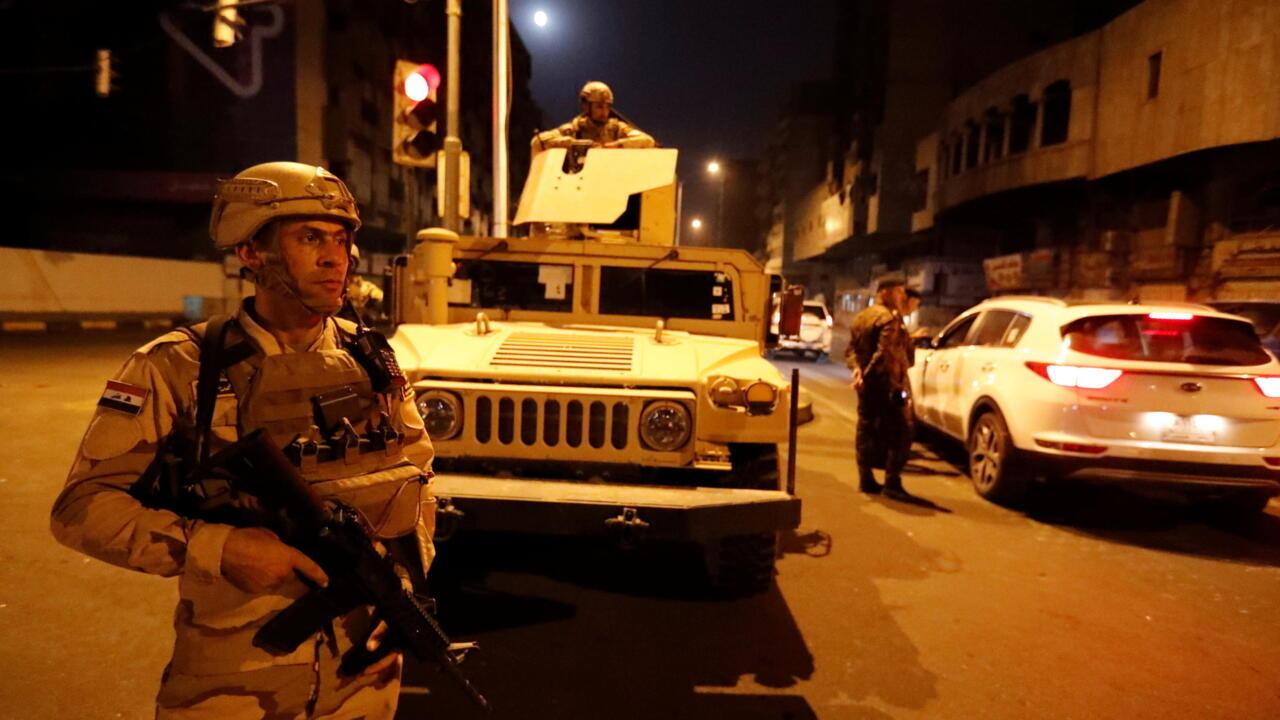 Tensions mounted in Iraq’s capital on Wednesday after the arrest of a militia commander on terrorism charges, prompting a dangerous showdown by the detainee’s paramilitary supporters and the Iraqi government.

The confrontation began after Iraqi security forces arrested at dawn militia leader Qassim Mahmoud Musleh based on a judicial investigation and arrest warrant on terrorism charges, Iraq’s military said in a statement. The statement said he was being questioned by a joint investigative committee.

Musleh is the head of the Popular Mobilization Forces in Anbar province. The PMF is a state-sanctioned group comprised of an array of militias formed to defeat the Islamic State group in 2014. Among the most powerful members of the group are Iran-backed Shiite militia groups.

Shortly after the arrest, forces affiliated with the PMF, which maintains offices inside the heavily fortified Green Zone, were deployed surrounding Prime Minister Mustafa al-Kadhimi’s headquarters.

The presence of the PMF inside the seat of Iraq’s government was considered by some senior Iraqi government officials as a way to pressure al-Kadhimi to release Musleh.

The prime minister described the show of force as “a serious violation of the Iraqi constitution and the laws in force,” adding in a statement “we have directed an immediate investigation into these movements.”

Al-Kadhimi later held a meeting with senior Shiite political leaders who hold sway over the PMF. The premier also ordered the formation of an investigative committee comprised of intelligence from both defense and interior ministries and the PMF security and National Security.

Three PMF officials said after the meeting Musleh was transferred from the custody of the Joint Operations Command, which oversees an array of Iraqi security forces, to PMF security.

An Iraqi intelligence official said Musleh’s arrest was recommended by the Anti-Corruption Committee headed by Lt. Gen. Ahmed Abu Ragheef, and was done based on a judicial order. The charges accuse Musleh of corruption and complicity in the assassinations of Iraqi activists in the southern city of Karbala. All four officials spoke on condition of anonymity due to the sensitive nature of the subject.

The incident highlights the government’s struggles to assert the rule of law and reign in powerful militia groups. Attempts to arrest militia-affiliated individuals in the past have unfolded along a similar pattern: Pressure from militia groups and concessions on the part of the government.

A raid carried out by the CTS last summer against the Iran-backed Kataib Hezbollah led to over a dozen arrests. All were eventually released after pressure and threats of escalatory violence against the government.

The rising number of assassination of outspoken activists sparked outrage and protests this week particularly after prominent protest organizer Ehab al-Wazni was gunned down in Karbala this month.

International condemnation flooded in from the United Nations and other diplomatic missions in Baghdad.

Any arrest case should run its course, as goes for any Iraqi. And surely, nobody should resort to a show of force to get their way. Such behaviour weakens the Iraqi state and further erodes public trust. State institutions must be respected at all times. Nobody is above the law.


“Any arrest case should run its course, as goes for any Iraqi,” tweeted U.N. Special Representative to Iraq Jeanine Hennis-Plasschaert. “Nobody should resort to a show of force to get their way. Such behavior weakens the Iraqi state and further erodes public trust. State institutions must be respected at all times. Nobody is above the law.”

Denial of responsibility! TechiLive.in is an automatic aggregator around the global media. All the content are available free on Internet. We have just arranged it in one platform for educational purpose only. In each content, the hyperlink to the primary source is specified. All trademarks belong to their rightful owners, all materials to their authors. If you are the owner of the content and do not want us to publish your materials on our website, please contact us by email – admin@techilive.in. The content will be deleted within 24 hours.
ArrestBaghdadcommanderHealth newsHealth updateIraniraqIraqi
0
Share