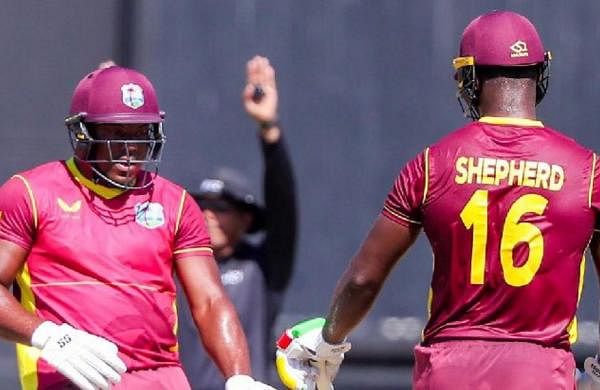 KINGSTON: Ireland beat the West Indies by five wickets in a rain-interrupted second one-day international at Sabina Park. Ireland was chasing 230 to win and was well ahead of the run rate at 157-4 in the 32nd over when rain stopped play for 90 minutes.

When the match resumed, the Duckworth-Lewis method reduced Ireland’s ask to 168 from 36 overs, or 11 more runs from 28 balls. The Irish knocked them off in seven balls, winning on a pair of no balls at 168-5. Victory tied the series 1-1, with the deciding ODI on Sunday on the same ground.

This ODI was rescheduled from Tuesday, when Ireland was too depleted to field a side because of five coronavirus cases and two injured players. Four weren’t available on Thursday, including captain Andy Balbirnie.

The West Indies successfully defended 269 last Saturday but not so much 229, which was boosted by 30 extras. William Porterfield and stand-in skipper Paul Stirling gave Ireland a flying start of 37 in the first five overs.

Harry Tector anchored the show with 54 not out off 75 balls, his second straight half-century and fourth in his last five ODIs. Tector featured in stands of 44 with Andy McBrine, who added 35, and 53 with Curtis Campher.

McBrine also starred with the ball when West Indies was made to bat first. The West Indies was cautious from the start and medium-pacer Craig Young took advantage with the first three wickets, all cheap. He took out openers Shai Hope, Justin Greaves and No. 3 Nicholas Pooran to have 3-12 off four overs.

McBrine’s offspin was introduced in the 18th over with West Indies 53-3, and he claimed Roston Chase then Kieron Pollard for 1. Sharmarh Brooks, who made 93 in the first ODI, held the innings together again until he was out lbw for 43 off 64 balls, attempting to sweep left-arm spinner George Dockrell.

The West Indies didn’t look like reaching 200 at 143-7 in the 40th, but Odean Smith immediately hit two sixes over McBrine’s head, hit two more against Campher, and swatted Mark Adair over the long off fence. Smith made 46 off 19 balls in a partnership of 58 with Romario Shepherd to get West Indies over 200.

Shepherd then hit four boundaries and was the last man out with two overs left while trying to pull McBrine, who took 4-36.

Denial of responsibility! TechiLive.in is an automatic aggregator around the global media. All the content are available free on Internet. We have just arranged it in one platform for educational purpose only. In each content, the hyperlink to the primary source is specified. All trademarks belong to their rightful owners, all materials to their authors. If you are the owner of the content and do not want us to publish your materials on our website, please contact us by email – [email protected]. The content will be deleted within 24 hours.
2nd ODIDefeatsDuckworth LewisIndiesIRE vs WIIrelandIreland VS West Indiesnews update
Share

samsung: Samsung may be working on convertible laptop with detachable foldable display – Times of India