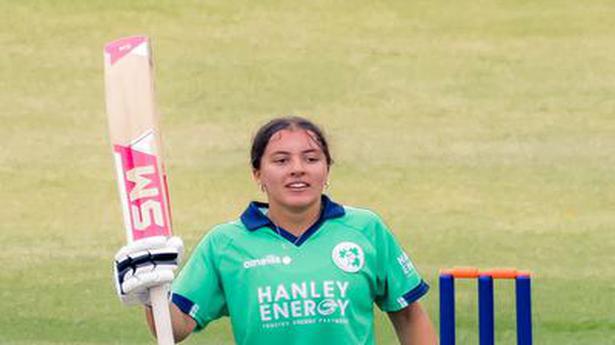 The 16-year old schoolgirl from Belfast overtook the record previously held by India’s Mithali Raj, who scored 114 not out against Ireland at the age of 16 years and 205 days in June 1999

Ireland’s Amy Hunter on Monday became the youngest player to score an ODI century, striking an unbeaten 121 to take her side to a win against Zimbabwe on her 16th birthday here, bettering the record previously held by India’s Mithali Raj.

The schoolgirl from Belfast overtook the record previously held by India’s Mithali Raj, who scored 114 not out against Ireland at the age of 16 years and 205 days in June 1999.

Hunter, playing only her fourth ODI, struck eight boundaries in her 127-ball knock as Ireland beat Zimbabwe by 85 runs.

Raj, 38, continues to play in the ODI and Test formats, leading the Indian teams in both.

“I didn’t really know what to think when I was coming up to my fifty. I just wanted to stick by and get there.

“When I reached my hundred, I had no idea what to do, whether to take the helmet off or keep it on. It was unbelievable.”

Hunter made her international debut against Scotland in May aged 15.

She is just the fourth woman to hit an ODI century for Ireland and the first since 2000.

The youngest male batter to score an ODI century remains Pakistan’s Shahid Afridi, who scored 102 against Sri Lanka in 1996 aged 16 years and 217 days.

Denial of responsibility! TechiLive.in is an automatic aggregator around the global media. All the content are available free on Internet. We have just arranged it in one platform for educational purpose only. In each content, the hyperlink to the primary source is specified. All trademarks belong to their rightful owners, all materials to their authors. If you are the owner of the content and do not want us to publish your materials on our website, please contact us by email – [email protected]. The content will be deleted within 24 hours.
AmyAmy HuntercenturionHunterireland women vs zimbabwe womenireland womens teamIrelandsnews update
Share

I commit a crime every time I pick a team, says Gareth Southgate | Football News – Times of India