Notice: amp_is_available was called incorrectly. `amp_is_available()` (or `amp_is_request()`, formerly `is_amp_endpoint()`) was called too early and so it will not work properly. WordPress is currently doing the `pre_get_posts` hook. Calling this function before the `wp` action means it will not have access to `WP_Query` and the queried object to determine if it is an AMP response, thus neither the `amp_skip_post()` filter nor the AMP enabled toggle will be considered. It appears the theme with slug `publisher` is responsible; please contact the author. Please see Debugging in WordPress for more information. (This message was added in version 2.0.0.) in /home/runcloud/webapps/techilive/wp-includes/functions.php on line 5313
 Israeli police detain Palestinian activist twins in Jerusalem’s Sheikh Jarrah - TechiLive.in 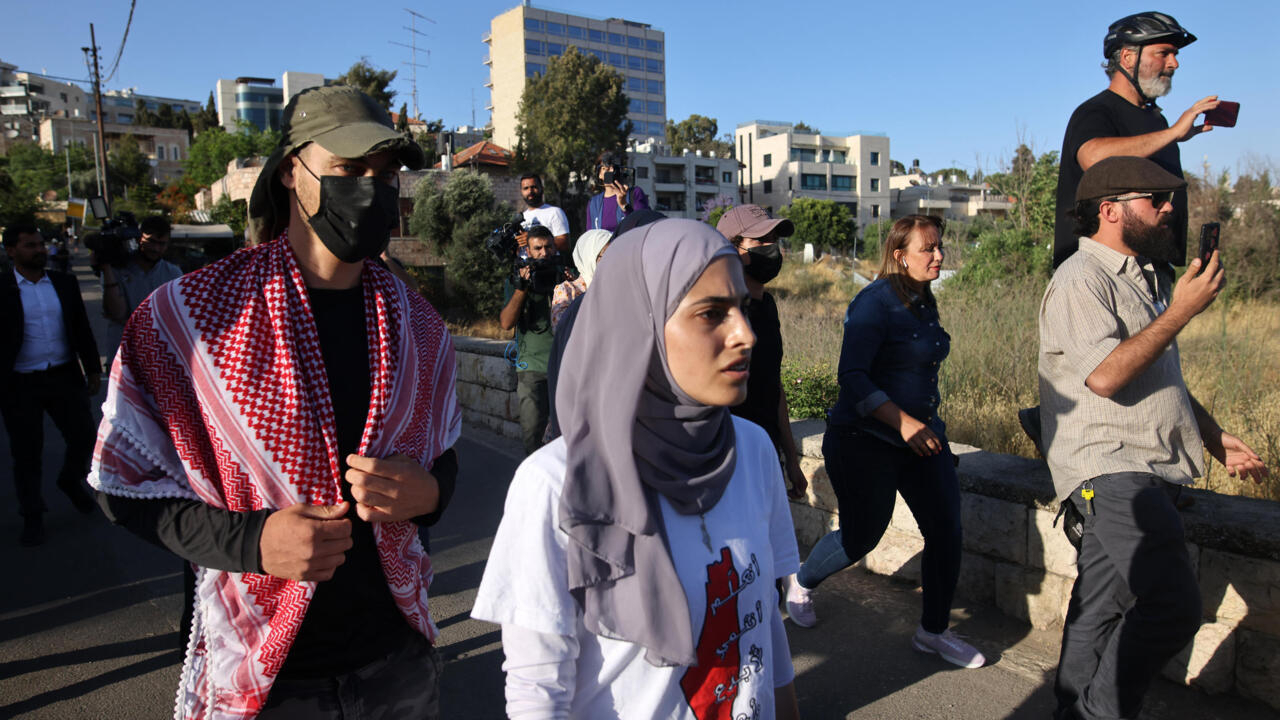 Israeli police on Sunday detained for several hours two prominent activists whose campaign against the threatened expulsion of Palestinian families from homes in the flashpoint Jerusalem neighbourhood of Sheikh Jarrah has found a global audience.

Mona el-Kurd, 23, was taken into custody on Sunday morning from her home in the Israeli-annexed east Jerusalem district, where a legal battle between Israeli settlers and several Palestinian families has crystallised anger over Israel’s settlement movement.

Security forces also left a summons for her twin brother, Muhammad, who later turned himself in.

Israeli police told AFP that Mona was “suspected of having participated in riots and other recent incidents in Sheikh Jarrah”.

Both were later released and returned home, an AFP reporter said.

We are free & unafraid. They cannot intimidate us.

Thousands of Palestinians are still incarcerated by the occupation, including Silwan’s Zuhair Rajaby. Our experience with arrest is but a small dot in the ocean of their sacrifices. Free them all. #SaveSilwan #SaveSheikhJarrah


While in detention, Mona had been “threatened in an attempt to stop her carrying on with her legally permitted activities”, family lawyer Nasser Odeh said.Their father Nabil el-Kurd said she had been denied access to a lawyer during interrogation, adding that the detentions were “an operation to terrorise the parents, because the voice that emerged from the neighbourhood was thanks to its youth”.

Nabil El-Kurd commenting on the charges levied against his detained children:

“Settlers attack us in our homes with their weapons while the army protects them, but they arrest our children.

This is their democracy and their freedom of expression.”pic.twitter.com/bbDL3NOgsb


As Mona left custody, security forces used stun grenades and fired rubber-coated bullets to disperse protesters who had gathered outside the east Jerusalem police station where she had been held. The Palestinian Red Crescent said 18 people were wounded.

Hamas, the Islamist group that controls the Palestinian enclave of Gaza, responded by launching volleys of rockets towards Israel on May 10, triggering an 11-day war between the Jewish state and Palestinian militants.

While Palestinians and their backers see the issue as a microcosm of Israeli efforts to push them out of the highly contested city, Jewish settlers and their supporters have labelled it a property dispute to be decided by Israeli courts.

The Kurd twins, from one of the families that faces being ousted from their home, have led an active protest movement on the streets and online.

They have gained hundreds of thousands of followers on platforms including Twitter and Instagram, using the hashtags #SheikhJarrah and #SaveSheikhJarrah to bring their neighbourhood’s plight global attention.

“Our weapon is the tongue and the camera,” their father said.

“Muhammad and Mona made the whole world turn around for our cause.”

Last month, as tensions in Jerusalem mounted during the build-up to the Gaza fighting, the Israeli supreme court postponed a hearing in the Sheikh Jarrah cases until further notice.

Under Israeli law, if Jews can prove that their families lived in east Jerusalem before the 1948 Arab-Israeli war that created the state of Israel, they can request the “return” of their property, even if Palestinian families have been living there for decades.

Palestinians whose ancestors became refugees in the 1948 war have no means to retrieve their homes or land in modern-day Israel.

Israeli right groups Ir Amim says up to 1,000 Palestinians in Sheikh Jarrah and the nearby Silwan district face being displaced.

Sheikh Jarrah has also drawn the attention of press freedom watchdogs, as journalists say they have been targeted by police while trying to report on demonstrations there.

On Saturday, Israeli forces arrested Al Jazeera reporter Givara Budeiri “in a brutal manner”, the network said in a statement, adding that authorities had destroyed a videographer’s camera as he was trying to work.

Budeiri was released from custody several hours after her arrest.

Al Jazeera television’s acting director-general, Mostefa Souag, decried “the systematic targeting of our journalists”, dubbing it “in total violation of all international conventions”.

The Paris-headquartered Reporters Without Borders (RSF) has voiced concern over Israel’s “disproportionate use of force against journalists”.

It criticised “attacks” on reporters filming in Sheikh Jarrah, the detention of Palestinian reporters, and the Jewish state’s demolition of a tower in the besieged Gaza Strip where news outlets operated.

Urgent – #Israel #Palestine: Al Jazeera reporter Givara Budeiri has been arrested in East Jerusalem by Israeli authorities while she was covering protests in Sheikh Jarrah. RSF denounces another obstacle to the right to inform and calls for her immediate release! pic.twitter.com/bSMjI8U5mu


During their military campaign in Gaza, Israel levelled the 13-storey building that housed the Qatar-based Al Jazeera television along with the US news agency The Associated Press after warning the structure’s owner to evacuate.

Denial of responsibility! TechiLive.in is an automatic aggregator around the global media. All the content are available free on Internet. We have just arranged it in one platform for educational purpose only. In each content, the hyperlink to the primary source is specified. All trademarks belong to their rightful owners, all materials to their authors. If you are the owner of the content and do not want us to publish your materials on our website, please contact us by email – admin@techilive.in. The content will be deleted within 24 hours.
activistdetainEast JerusalemHealth newsHealth updateIsraelIsraeliIsraeli-Palestinian conflict
0
Share