Notice: amp_is_available was called incorrectly. `amp_is_available()` (or `amp_is_request()`, formerly `is_amp_endpoint()`) was called too early and so it will not work properly. WordPress is currently doing the `pre_get_posts` hook. Calling this function before the `wp` action means it will not have access to `WP_Query` and the queried object to determine if it is an AMP response, thus neither the `amp_skip_post()` filter nor the AMP enabled toggle will be considered. It appears the theme with slug `publisher` is responsible; please contact the author. Please see Debugging in WordPress for more information. (This message was added in version 2.0.0.) in /home/runcloud/webapps/techilive/wp-includes/functions.php on line 5313
 Israeli police step up crackdown on Palestinian protesters - TechiLive.in 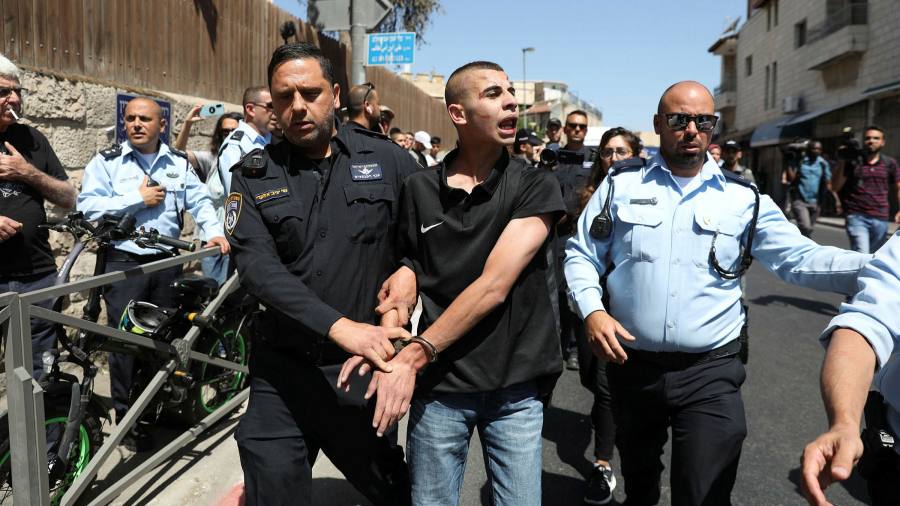 The Israeli police force said it had arrested 348 suspects in recent days as it rounds up alleged participants in the worst unrest in Israel and Palestinian territories for years.

The announcement late on Thursday confirms reports from Adalah, an independent human rights organisation in Israel, which said at least 200 Palestinians in Israel had been arrested this week, describing the raids as a way to “intimidate and exact revenge”.

Israel last week agreed a ceasefire with Palestinian militant group Hamas after an 11-day conflict that saw Hamas fire rockets deep into the Jewish state and Israel launch its heaviest assault on Gaza in seven years, killing about 250 Palestinians, including women and children. Around 13 people in Israel died.

That conflict also sparked communal unrest between Palestinians with Israeli nationality and Jews, a rarity that unsettled political leaders and wider society in Israel, and widespread unrest in the West Bank. After the ceasefire, there have been sporadic clashes between police and youths in the West Bank.

This week’s crackdown on protesters threatens to extend unrest, activists warn, ahead of a so-called ‘day of rage’ on Friday called for by the Palestinian authorities in the West Bank.

The police this week launched operation “law and order”, describing it as “a comprehensive deployment against the rioters, criminals and everyone involved.” On Thursday, the police said the operation would continue into next week, focusing on people with illegal weapons. The round-up builds on 1,938 arrests made during the Israeli bombardment of Gaza.

“We will continue working with the large forces we have . . . to make sure that the people that harmed the security of the citizens are arrested and prosecuted, and the streets keep calm,” said Yaakov Shabtai, the police commissioner. The police did not provide a breakdown of the suspects’ ethnic backgrounds.

Mariam Afifi, 26, was arrested when she tried to assist a woman who had fainted outside the homes of Palestinians in occupied East Jerusalem threatened with expulsion. She was charged with throwing rocks and attacking police, but was released after video evidence showed her being manhandled by an officer. Protesters have been emboldened by the power of social media, she said. “All we have seen is losing land and more Israeli settlements,” she said. “The situation is deteriorating.”

Shadi Kharouf, 25, said he was arrested and beaten in the Old City after he intervened to help a young woman whose headscarf had been wrenched off by a policeman. He spent a week in prison before a court placed him under house arrest pending sentencing for attacking the police. “I was not political,” he said. “All I was doing is defending a ‘sister’ without even touching the officer.”

Kharouf’s release conditions include a three-month ban from al-Aqsa mosque, the epicentre of the recent unrest. The mosque lies in a compound — known by Muslims as Haram ash-Sharif, or the noble sanctuary, and to Jews as the Temple Mount — which is sacred to both religions.

Despite the ceasefire, tensions have remained high because of the increased numbers of Israeli “settlers” allowed into the compound by the Israeli authorities. Palestinians claim these are extremist groups staking a claim with the ultimate aim of building a third Jewish temple there.

Sheikh Omar al-Kiswani, director of the mosque, said the settler’s actions and aggressive policing risked further inciting Palestinians and Muslims worldwide. “Their provocations are the reason for this unrest and instability,” he said. “We feel there is war each time we come to this sacred place.”

Loading...
Denial of responsibility! TechiLive.in is an automatic aggregator around the global media. All the content are available free on Internet. We have just arranged it in one platform for educational purpose only. In each content, the hyperlink to the primary source is specified. All trademarks belong to their rightful owners, all materials to their authors. If you are the owner of the content and do not want us to publish your materials on our website, please contact us by email – admin@techilive.in. The content will be deleted within 24 hours.
crackdownEducation newsEducation updateIsraelinews updatePalestinianpoliceprotesters
0
Share