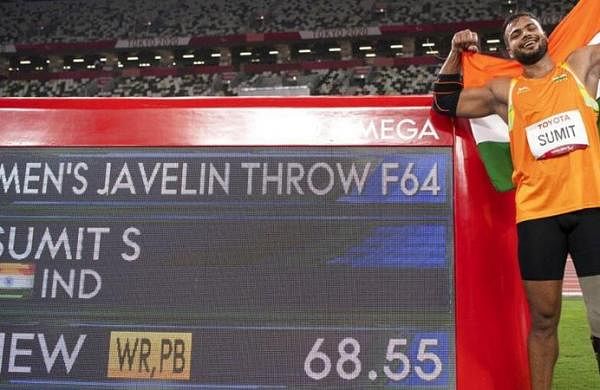 It was not my best performance, says Sumit Antil after winning gold with world record throws

TOKYO: Breaking the world record five times on his way to gold in the Paralympics did not suffice for reluctant-wrestler-turned-javelin-thrower Sumit Antil and the Indian vowed to better what was already an incredible performance by every yardstick.

He was a wrestler prior to a motorcycle accident that resulted in his left leg being amputated, before life smiled on him and a new avenue opened up.

“I was not that great a wrestler. In my area of India, the family forces you to become a wrestler,” he quipped.

“I started when I was seven, eight years old, and I continued for four or five years, but not regularly. I was not that good,” Antil said.

“I met with an accident and had my leg amputated. After that, life changed. I went to the stadium just to meet people in 2015, and I saw para athletes. They said, ‘You have good height and posture, maybe you can be in the next Paralympics’. Who knew I would be the next champion?” He did become a champion on Monday, and that too, at the sport’s grandest stage.

“This is my first Paralympics and I was a little nervous because the competitors are great. I was hoping for a 70-metre-plus throw, maybe I can do 75m. It was not my best, I am very happy to break the world record.”

This was not the first time he was making the javelin travel far.

A few months before the Tokyo Games, within a span of 20 days, Haryana’s Antil had broken the world record twice in the F-64 category.

In his sixth and last attempt he hurled the javelin to a distance of 66.90 metres at the 19th Para-Athletics Championships at Bengaluru in March.

The effort bettered his own world record of 66.43 metres, set during the third leg of the Indian Grand Prix on March 5 in Patiala.

Both these efforts were, however, not recorded for world records.

On how much further he can throw, he said, “In training I have thrown 71m, 72m, many times. I don’t know what happened in my competition.

“One thing is for sure in future I will throw much better,” Antil who started out as a wrestler before switching to javelin throw said. But he was definitely happy to have won the top medal at the biggest stage, terming it as realisation of a dream.

“It is a dream come true. I can’t express my feelings right now,” the 23-year-old who entered the Tokyo Paralympics as the world record holder in his event said.

Antil, who lost his left leg below the knee after he was involved in a motorbike accident in 2015, sent the spear to 68.55m in his fifth attempt, which was the best of the day by quite a distance and a new world record.

In fact, he bettered the previous world record of 62.88m, also set by him, five times on the day.

His last throw was a foul.

The F64 category is for athletes with a leg amputation, who compete with prosthetics in a standing position.

A student of Delhi’s Ramjas College, Antil was an able-bodied wrestler before his accident which led to amputation of his leg below the knee.

A para athlete in his village initiated him to the sport in 2018.

He also competed against Olympic champion Neeraj Chopra in the able-bodied Indian Grand Prix series 3 on March 5 in Patiala.

Denial of responsibility! TechiLive.in is an automatic aggregator around the global media. All the content are available free on Internet. We have just arranged it in one platform for educational purpose only. In each content, the hyperlink to the primary source is specified. All trademarks belong to their rightful owners, all materials to their authors. If you are the owner of the content and do not want us to publish your materials on our website, please contact us by email – [email protected]. The content will be deleted within 24 hours.
Loading...
Antilgoldnews update​Paralympics 2020Paralympics 2021Performancerecordsports news
Share

Novak Djokovic Knocks on the Door of a Very Exclusive Club