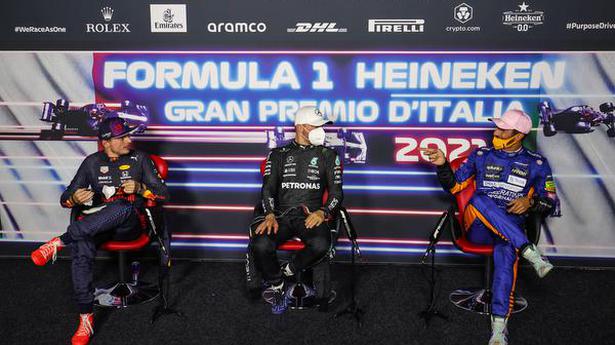 Red Bull’s Max Verstappen took pole position for the Italian Grand Prix and surged five points clear of Lewis Hamilton in the Formula One championship after a sprint qualifying race on September 11.

Hamilton’s Mercedes team mate Valtteri Bottas won the sprint but engine penalties sent the Finn to the back of the grid for the main race at Monza.

While Verstappen is perfectly placed for an eighth win in 14 races, seven-times world champion Hamilton will start fourth. The championship gap is in danger of dropping into double figures.

“The race was better than expected, we scored some nice little points. It is going to be an interesting race tomorrow,” said Verstappen, second at the chequered flag.

McLaren’s Daniel Ricciardo will join Verstappen on the front row for the first time since the pair were teammates at Red Bull in 2018.

Mercedes had planned to impose team orders for their drivers to swap places during the race and maximise Hamilton’s points haul but the opportunity never materialised. Hamilton only reclaimed a place when AlphaTauri’s Pierre Gasly, last year’s surprise winner at the Italian team’s home race, broke his front wing which became lodged under the car and pitched him out.

That brought out the safety car until the end of lap three and Hamilton was unable to get close enough to Norris after that to attempt an overtake. “It wasn’t great,” the Briton said of his afternoon. “I’ve got to try and figure out how I can get by and try to limit the damage.

“You saw the pace of the Red Bull, they are so fast. It should be an easy win [for Verstappen] and I have to try and get past the two guys [Ricciardo and Norris] ahead.”

Loading...
Denial of responsibility! TechiLive.in is an automatic aggregator around the global media. All the content are available free on Internet. We have just arranged it in one platform for educational purpose only. In each content, the hyperlink to the primary source is specified. All trademarks belong to their rightful owners, all materials to their authors. If you are the owner of the content and do not want us to publish your materials on our website, please contact us by email – [email protected]. The content will be deleted within 24 hours.
auto racingBottasBottas takes engine penaltychampionship pointsdaniel ricciardo front rowf1f1 latest newsf1 news
0
Share

Black Capitalism’ Promised a Better City for Everyone. What Happened?