Notice: amp_is_available was called incorrectly. `amp_is_available()` (or `amp_is_request()`, formerly `is_amp_endpoint()`) was called too early and so it will not work properly. WordPress is currently doing the `pre_get_posts` hook. Calling this function before the `wp` action means it will not have access to `WP_Query` and the queried object to determine if it is an AMP response, thus neither the `amp_skip_post()` filter nor the AMP enabled toggle will be considered. It appears the theme with slug `publisher` is responsible; please contact the author. Please see Debugging in WordPress for more information. (This message was added in version 2.0.0.) in /home/runcloud/webapps/techilive/wp-includes/functions.php on line 5313
 Italian Open 2021: Novak Djokovic sets up final vs Rafael Nadal after ending Lorenzo Sonego's dream run - TechiLive.in 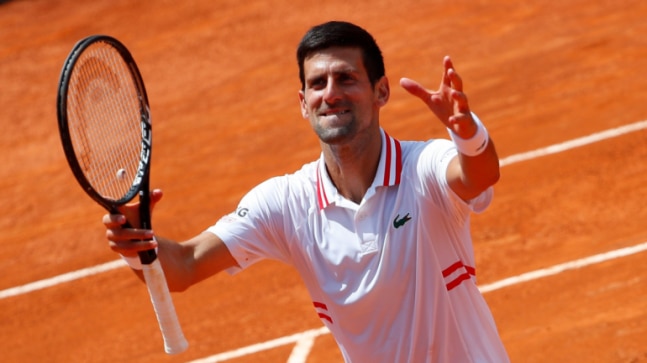 It’s’ Novak Djokovic vs Rafael Nadal on Super Sunday in the final of Italian Masters 2021. The World No.1 and defending champion battled his way through in 5 sets across 2 matches on Saturday to reach his 11th final at the Masters 1000 tournament and set up his 57th meeting with the King of Clay. Both the gladiators of the sport are looking to win their first title of the season on the red dirt in the lead up to French Open, starting later this month.

Novak Djokovic fended off a stern threat from local hero Lorenzo Sonego 6-3, 5-7 (2), 6-2 in a pulsating semi-final battle that extended to 2 hours and 44 minutes under the lights in front of fans who were cheering for the Italian player. Both players had played their quarter-final match earlier in the day after wet weather forced delays on Friday.

Djokovic, a 5-time champion in Rome, completed a stunning comeback-from-behind win over 5th seed Stefanos Tsistsipas after resuming his quarter-final a set and a break down. On the other hand, Sonego, World No. 33, completed his giant-killing run by beating 7th seed Andrey Rublev after being a set down.

Sonego, who had a dream run in Rome with wins over US Open champion Dominic Thiem and Gael Monifls, made life difficult for Djokovic who raced to a fine start. It looked like the Serb was in a hurry as he wrapped up the first set 6-3 but Sonego, cheered on by the local crowd, forced a decider. The second set was an enthralling battle that ebbed and flowed. Sonego showed a lot of courage and character to force a decider but Djokovic proved too hot to handle in the closing stages of the game.

Djokovic vs Nadal in blockbuster battle in Rome

Most Nadal-Djokovic matches by event:

There is a lot to look forward to on Sunday as Nadal will be looking to equal Djokovic’s record for the most number of ATP Masters 1000 wins. Nadal, who has 35, is one behind Djokovic on the elite list.

Earlier on Saturday, Nadal stormed into his 12th final of Italian Open after easing past USA’s Reilly Opelka 6-4, 6-4. Nadal was in top form as he carried the momentum following the straight-set win over Alexander Zverev to the semi-final against World No. 47 Opelka who had not lost a set before Saturday’s outing against the 20-time Grand Slam champion. Nadal got a break in each of the two sets to complete a comfortable victory.

Loading...
Denial of responsibility! TechiLive.in is an automatic aggregator around the global media. All the content are available free on Internet. We have just arranged it in one platform for educational purpose only. In each content, the hyperlink to the primary source is specified. All trademarks belong to their rightful owners, all materials to their authors. If you are the owner of the content and do not want us to publish your materials on our website, please contact us by email – admin@techilive.in. The content will be deleted within 24 hours.
djokovicdreamFinalItalianLorenzoNadalnews updateNovak
0
Share