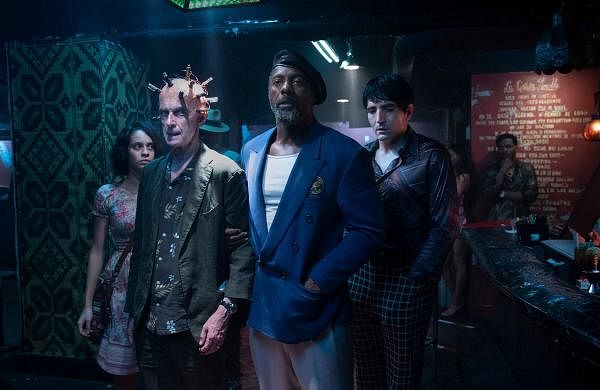 WASHINGTON: James Gunn, the director of the upcoming DC flick ‘The Suicide Squad’ recently unveiled a new image from his sequel, which is scheduled to hit theaters and HBO Max simultaneously on August 6.

According to Deadline, Gunn took to his Instagram handle and shared a still from the movie, referring to characters played by actors Daniela Melchior, Peter Capaldi, Idris Elba and David Dastmalchian, respectively. In the caption, he wrote, “Squad Undercover in Corto Maltese: Ratcatcher 2, The Thinker, Bloodsport, & Polka Dot Man in TheSuicideSquad.”

The upcoming film, which Gunn also wrote, follows an assortment of supervillains and criminals from Belle Reve prison, as they’re sent to the island of Corto Maltese, as part of the super-secret, super-shady Task Force X.

‘The Suicide Squad’ is something of a sideways sequel to the 2016 film ‘Suicide Squad’. Cena’s Peacemaker is expected to be a highlight of the film and is getting his own HBO Max spinoff from Gunn. This is Gunn’s first feature since 2017’s ‘Guardians of the Galaxy Vol. 2’. He is expected to begin production on a third ‘Guardians’ film in London later this year.

Loading...
Denial of responsibility! TechiLive.in is an automatic aggregator around the global media. All the content are available free on Internet. We have just arranged it in one platform for educational purpose only. In each content, the hyperlink to the primary source is specified. All trademarks belong to their rightful owners, all materials to their authors. If you are the owner of the content and do not want us to publish your materials on our website, please contact us by email – [email protected]. The content will be deleted within 24 hours.
entertainment newsEntertainment updateGunnJamesjames gunnnews updateSquadSuicide
0
Share

Adventure, fantasy, sci-fi and action—here’s the list of top OTT releases for this week