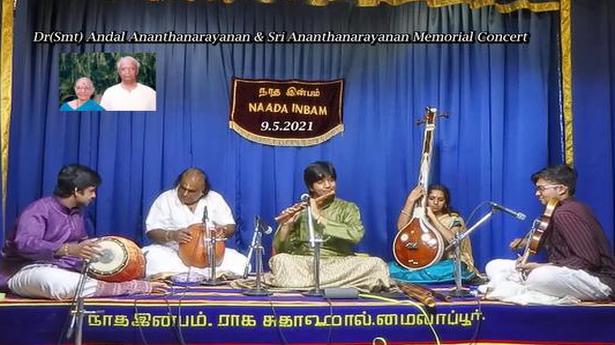 On the day of his daughter’s wedding, Saint Tyagaraja was anxiously waiting for his prime disciple, Walajapet Venkataramana Bhagavatar. The disciple arrived with a large painting of Rama, Lakshmana and Sita, a gift for the newly-weds. And Tyagaraja burst out singing ‘Nannu palimpa’ in Mohanam. This was the piece de resistance of J. A. Jayanth’s flute recital last Sunday for Naada Inbam, in memory of Andal Ananthanarayanan and V. Ananthanarayanan.

Jayanth presented an aesthetic and elaborate interpretation, with the swaraprastara at the pallavi. In between, he played the long flute to create an ultra-tranquil ambience. Some of the swara phrases reminded one of Flute Mali. Little wonder, as his grandfather and guru, vidwan T.S. Sankaran was Mali’s disciple. On the violin, Sayee Rakshit, a student of V. Ramani, K.G. Rajesh and now, A. Kanyakumari, responded brilliantly.

Earlier, Jayanth’s Mohanam alapana had a unique musical energy with silken phrases and eloquence. Sayee’s delicate essay of the raga added to the experience. N.C. Bharadwaj (mridangam) and ‘Ghatam’ Karthick presented a thani that sounded like a continuation of the kriti. If Bharadwaj rose to the occasion with a wholesome vinyasa where the intricate tisra nadai was remarkably creative, Karthick’s characteristic joyous approach enriched the concert.

Jayanth presented two more Tyagaraja compositions — the Arabhi Pancharatna kriti, ‘Sadinchane’ and ‘Kamalapthakula’ in Brindavana Saranga . The latter was preceded by a short sketch of the raga. The saint-poet of Thiruvaiyaru says, ‘Rama is like a moon emerging from the ocean of the Sun dynasty’. The kalpanaswaras at pallavi summed up the emotion and appeal of the composition. Jayanth and Sayee together created a few brilliant moments in the recital, which had an energetic start with the Hamsadhwani varnam, ‘Jalajaksha’, followed by ‘Yedhaiya gathi,’ the Chalanattai kriti by Koteeswara Iyer, with swarams at the pallavi.

Jayanth offered an extensive yet contemplative alapana in Subhapantuvarali. I would rate it as one of the best elucidations of the raga that I have heard in recent times, with passages of relative calm slowly giving way to pulsating phrases. It appealed to both the ear and the soul.

Dikshitar’s ‘Sree Satyanarayanam’ in Rupakam offered scope to explore the potential of the rather pensive tune — although in Hindustani music, Subhapantuvarali is often played to usher in a festive spirit. The exhaustive swaraprastara helped to create an ebullient spirit, especially when he played the long flute.

Purandaradasa’s ‘Venkatachala nilayam’ in Sindhubhairavi evoked an air of devotion. Perhaps inspired by his own playing of the raga, Jayanth rendered an allied Hindustani raag Bhairavi. ‘Jo bhaje hari ko sada, sohi parama pada paavega,’ Brahmanand’s bhajan popularised by Pt. Bhimsen Joshi, was presented in a simple manner. His flute conveyed well the essence of the verse, ‘One who always thinks of god will alone attain the feet of the god’.

Narayana Tirtha’s Tarangam, ‘Govindamiha gopika nanda kandam’ (Khanda Chapu) in Bageshri, again with a predominantly Hindustani flavour, instantly brought forth the bhakti and karuna rasas. Jayanth wound up the recital with a Thiruppugazh in Hamsanandi.

A word about the tambura artiste will not be out of place. In these days of all-pervasive electronic tamburas, it was a delight to see Purva Dhanasree on the instrument.

The Chennai-based author writes on music and culture.

Denial of responsibility! TechiLive.in is an automatic aggregator around the global media. All the content are available free on Internet. We have just arranged it in one platform for educational purpose only. In each content, the hyperlink to the primary source is specified. All trademarks belong to their rightful owners, all materials to their authors. If you are the owner of the content and do not want us to publish your materials on our website, please contact us by email – [email protected]. The content will be deleted within 24 hours.
beautycapturesentertainment newsEntertainment updatefluteJ.A. jayanth; flute concert at Naada Inbam; memory of Ananthanarayanan and Andal Ananthanarayanan; Subhapantuvarali; Hamsadhwani; Mohanam;JayanthsMohanam
0
Share

CDC Drops Most Mask Rules for the Fully Vaccinated