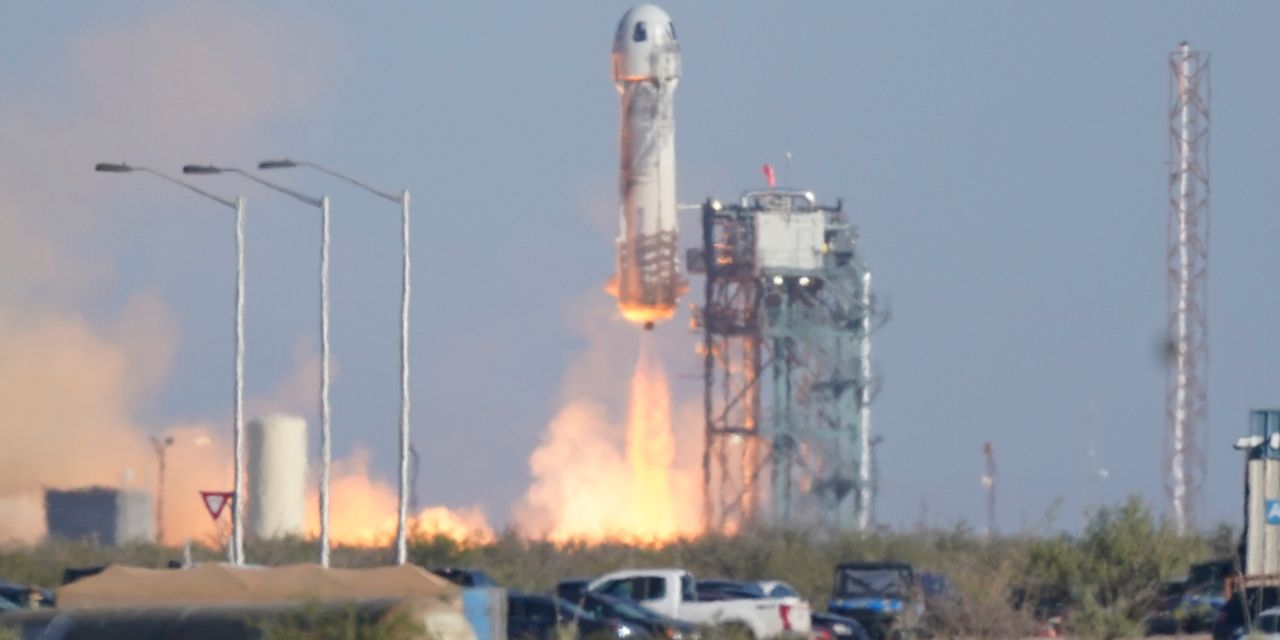 and three others to the edge of space Wednesday morning, the latest flight aimed at establishing the fledgling space-tourism market.

Blue Origin conducted the flight as aviation regulators assess recent allegations, made in a September letter signed by a former employee, that the company hasn’t always given priority to safety. The company has said it stands by its safety record.

Blue Origin launched the passengers at 10:49 a.m. ET from the company’s facility in West Texas. It brought them back around 10 minutes later in a passenger capsule that deployed parachutes for the landing. At its peak, the capsule transporting the passengers reached an altitude of 66.5 miles, according to the company.

Mr. Shatner, 90 years old, is now the oldest person to reach space. After he exited the capsule Wednesday morning, he said he was struck by the contrast of the blue atmosphere with the black expanse of space.

“Everybody in the world needs to do this,” he told Mr. Bezos, who accompanied the passengers until they boarded the capsule for the flight and met them after the landing.

Will billionaire-funded space trips help or hinder exploring the final frontier? Join the conversation below.

to the edge of space.

SpaceX last month completed a three-day orbital mission paid for by the billionaire chief executive of a payments company.

Blue Origin’s launch of Mr. Shatner, who played Captain Kirk on the original “Star Trek’’ series, and three others made Wednesday’s flight a high-profile event in news coverage and on social-media platforms. The company livestreamed the flight with its own hosts discussing the effort, similar to how other space companies, including SpaceX, have promoted their own launches to wider audiences.

Having someone like Mr. Shatner on board helps generate attention for the flight, said

an associate professor at the University of North Carolina who worked with the Harris Poll to measure public perceptions private space flights after Messrs. Bezos and Branson flew this summer. “For better or worse, celebrity matters,” Mr. Czabovsky said.

Mr. Shatner, along with

Blue Origin’s vice president of mission and flight operations, didn’t pay for Wednesday’s flight, with the company previously describing them as guests for the trip.

co-founder of the clinical-research software company Medidata Solutions, and

co-founder of the Earth data company Planet Labs Inc.—paid for their tickets, according to Blue Origin. The company hasn’t disclosed prices, and Messrs. Boshuizen and de Vries declined to comment on the costs.

Mr. Boshuizen said in an interview earlier this month that he wanted to take the trip because he has been trying to make human spaceflight a reality for his entire career. “It’s just something I very strongly believe in,” he said.

In a letter posted online in September, some current and former Blue Origin employees alleged instances of sexual harassment at the company and criticized its safety practices.

According to the letter, which one of the people signed publicly, a desire to compete with Mr. Musk and demonstrate progress to Mr. Bezos “seemed to take precedence over safety concerns that would have slowed down the schedule.”

The Federal Aviation Administration, which regulates space launches and re-entries, is looking into the safety allegations. A spokesman for the agency said the review is continuing.

Blue Origin has said it doesn’t tolerate discrimination or harassment and has many ways for employees to report misconduct. The company said it believes in its safety record. The New Shepard, the rocket that took up Mr. Bezos in July and launched the crew Wednesday, is the safest space vehicle ever designed, Blue Origin said.

Wednesday’s flight was the second time Blue Origin has transported people to space and the company’s 19th consecutive completion of a successful landing for its crew capsule, Blue Origin said. That vehicle is stacked atop one of the New Shepard rockets for space tourism flights.

The uptick in human space flight handled by commercial enterprises is part of entrepreneurs’ and investors’ broader interest in space as a venue for economic activity. Startups have developed businesses to provide fuel for satellites and to capture and sell data about Earth, as well as helping to launch rockets. Larger aerospace companies have also made investments in vehicles and services.

Demand for space tourism is still being tested, with relatively few opportunities available right now for flights. For companies delving into the market, “the key question is what will happen when they move away from special customers” like wealthy people, said

a University of Central Florida professor who studies space policy.

After its capsule landed Wednesday, Blue Origin said it planned one more flight with people on board this year and is working on several trips for 2022. In July, Mr. Bezos said the company was nearing $100 million in sales for space-tourism launches.

Such flights could generate roughly $4 billion in annual revenue by 2030, according to UBS analysts. Ticket prices, however, remain out of reach for most people, with Virgin Galactic, for example, charging at least $450,000 a seat.

Denial of responsibility! TechiLive.in is an automatic aggregator around the global media. All the content are available free on Internet. We have just arranged it in one platform for educational purpose only. In each content, the hyperlink to the primary source is specified. All trademarks belong to their rightful owners, all materials to their authors. If you are the owner of the content and do not want us to publish your materials on our website, please contact us by email – [email protected]. The content will be deleted within 24 hours.
aerospaceaerospace productsAerospace Products/PartsAerospace/DefenseApplications SoftwareBezosblueblue origin
0
Share

#WhereAreThey Series: I want to focus on my career in health and wellness, says Black actor Ayesha Kapur