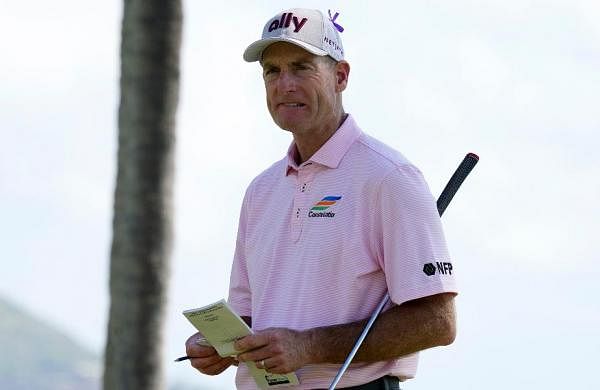 HONOLULU: More than a quarter-century after Jim Furyk first won the Sony Open, he returned with more than a PGA Tour Champions tune-up in mind.

On a course he can handle, Furyk made a hole-in-one on the 17th hole to cap off a big run late in his opening round on Thursday for an 8-under 62, giving him a one-shot lead among early starters at Waialae Country Club.

Kevin Chappell, down to his last five tournaments on a medical exemption stemming from back surgery, past Sony Open winner Patton Kizzire and Michael Thompson were at 63. Furyk went a decade without playing the Sony Open until returning last year once he became eligible for the 50-and-older PGA Tour Champions, which opens next week on the Big Island.

“Trying to get ready for this year and what do I look at this week? I want to be competitive. I want to compete and put myself in position, in the hunt, and also want to get a feel for where my game is and what I want to work on for the year,” Furyk said. Furyk (51) won so long ago at Waialae that it was a year before Collin Morikawa was even born.

The tournament had a different title sponsor in 1996, and the perks of winning (USD 216,000 for first place, compared with USD 1.35 million this year) included a United Airlines pass for two to travel anywhere in the world for a year. There were other reminders for Furyk.

“Played a practice round with a guy that called me ‘sir,’ and later on he asked me what I liked most about the Champions Tour. And I said, ‘No one calls me sir’. He said that his dad would be angry with him if he didn’t,” Furyk said.

On the course, not much changed. Waialae is on the short list of PGA Tour courses that doesn’t favor all-out power, and even after heavy rain a week ago, there’s enough bounce and roll on shots in the fairway to make it feel even shorter.

Furyk opened with a long three-putt bogey, which did not project to what kind of day he had on the greens. He made a pair of 30-foot birdie putts early, and then finished strong with birdie putts from 12, 15 and 25 feet starting on the 14th hole, and then a 6-iron for an ace at No. 17.

Cameron Smith, who won last week at Kapalua with a record score to par at 34 under, was among those playing in the afternoon as he tries to join Justin Thomas (2017) and Ernie Els (2003) as the only player to sweep the Hawaii swing.

Furyk won both tournaments, just not the same year. The start was a big one for Chappell, whose career has been start-and-stop since surgery on his back after the 2018 season. He also realized it was time to take care of more than his body.

“I definitely had some lingering stuff going last year coming from my back throughout the year, and kind of end of the year I decided I wasn’t good physically, I wasn’t good mentally and I needed to take some time,” Chappell said.

“And so I did. The tour has been phenomenal with that supporting me. Really dove into the mental side and believe it or not, the better I got mentally, the better my back got. It’s been a lot of hard work but it’s been great,” he added.

Forty-nine of the 72 players from the morning wave shot in the 60s, not unusual for this tournament. The conditions were slightly tougher than last week, though Waialae has little in common with Kapalua except for views of the blue Pacific.

The rough is slightly higher and feels even thicker with lingering moisture. Ryan Palmer opened with a 64, while Billy Horschel led the large group at 65. Brandt Snedeker, coming off a tragic year of losing both parents, and former No. 1 amateur Takumi Kanaya were among those at 66.

Furyk played only six times on the PGA Tour last year, all on courses that don’t require big length. He missed the cut in the last three events he played. For the first tournament of the year, he was pleased with his thinking and had zero complaints about his putting.

Statistically, he made 156 feet worth of putts, and that was on 17 greens. He didn’t need a putter on the 17th hole, where his 6-iron that he caught a hair thin still had enough carry to hold its line and drop into the cup. Furyk said it was his 11th ace on tour. He couldn’t remember the last one, perhaps a product of having been out here a long time.

Denial of responsibility! TechiLive.in is an automatic aggregator around the global media. All the content are available free on Internet. We have just arranged it in one platform for educational purpose only. In each content, the hyperlink to the primary source is specified. All trademarks belong to their rightful owners, all materials to their authors. If you are the owner of the content and do not want us to publish your materials on our website, please contact us by email – [email protected]. The content will be deleted within 24 hours.
bigCapsFurykGolfJimJim FurykLateLead
Share