Notice: amp_is_available was called incorrectly. `amp_is_available()` (or `amp_is_request()`, formerly `is_amp_endpoint()`) was called too early and so it will not work properly. WordPress is currently doing the `pre_get_posts` hook. Calling this function before the `wp` action means it will not have access to `WP_Query` and the queried object to determine if it is an AMP response, thus neither the `amp_skip_post()` filter nor the AMP enabled toggle will be considered. It appears the theme with slug `publisher` is responsible; please contact the author. Please see Debugging in WordPress for more information. (This message was added in version 2.0.0.) in /home/runcloud/webapps/techilive/wp-includes/functions.php on line 5313
 Joshua and Fury's 'super bout' in doubt - TechiLive.in 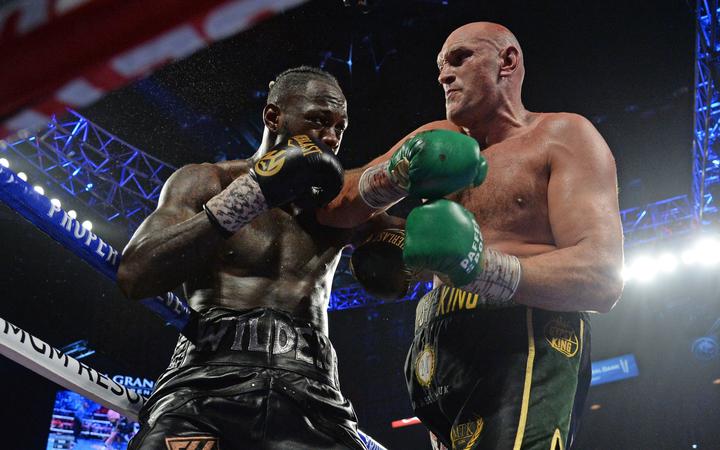 Tyson Fury has been ordered to fight Deontay Wilder for a third time, casting doubt over a proposed August super bout with Anthony Joshua.

Fury, 32, won the WBC world heavyweight title from Wilder in a rematch in February 2020 after an initial draw.

The pair were due to fight again but delays caused by the Covid-19 pandemic prompted Fury to seek an alternative.

A US judge ruled in mediation that Wilder has a right to face Fury for a third time before 15 September.

The American’s team had long argued their fighter had a contractual right to a third fight with Fury.

Wilder and Fury during their 2020 fight.
Photo: PHOTOSPORT

But after delays caused by the pandemic led to a July 2020 contest being postponed, Wilder’s team then sought to move the bout into 2021.

Fury refused the 2021 date and stated he would move on. That prompted mediation overseen by American judge Daniel Weinstein, who has now sided with Wilder and set a 15 September deadline for a third contest.

Fury’s US promoters Top Rank did not wish to comment on the development when contacted by BBC Sport.

Just 24 hours before Monday’s arbitration hearing, Fury confirmed he had agreed to fight fellow Briton Joshua – holder of the IBF, WBA and WBO belts – for all four heavyweight world titles in Saudi Arabia on 14 August.

Joshua’s promoter Eddie Hearn has also stated several times that the August bout was in place with terms agreed.

The mediation outcome does not necessarily mean a Fury-Joshua fight cannot take place in August but fresh deals will now need to be struck for it to do so.

This could take the form of Wilder being offered a financial sum to allow Fury-Joshua to take place.

Pay-per-view sales and ticket sales will serve to substantially add to the total revenue of the contest.

If it goes ahead, Joshua versus Fury will be the first bout in heavyweight history where all four world titles are on the line.

Denial of responsibility! TechiLive.in is an automatic aggregator around the global media. All the content are available free on Internet. We have just arranged it in one platform for educational purpose only. In each content, the hyperlink to the primary source is specified. All trademarks belong to their rightful owners, all materials to their authors. If you are the owner of the content and do not want us to publish your materials on our website, please contact us by email – admin@techilive.in. The content will be deleted within 24 hours.
AudioboutCurrent AffairsdoubtFurysJoshuaNewsnews update
0
Share

Employee Experience Matters More Than Ever. Here’s How to Elevate It.