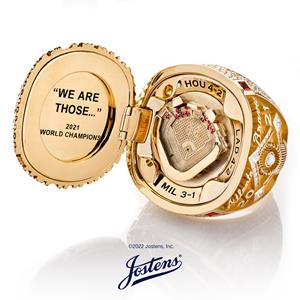 “The 2021 World Series Ring is truly a feat of jewelry engineering and detailed storytelling, it is a stunning tribute to the Braves and their unwavering commitment to excellence this season,” said Chris Poitras VP & COO of Jostens Professional Sports Division. “Jostens is honored to present the Braves with their World Series ring, which has a never-before-seen feature that will become a part of championship ring history.”

“We selected Jostens to be our partner to celebrate this chapter of Braves history as they have the ability to capture a championship journey unlike any other company in the industry,” said Derek Schiller, President & CEO of the Atlanta Braves. “Our 2021 World Series Ring is a masterpiece which beautifully celebrates our incredible season which ended as World Champions. We are also thrilled to have the opportunity to share the championship excitement with our incredible fan base and the special collection Jostens has put together.”

The Atlanta Braves 2021 season was an undeniable success, as they achieved the greatest title in baseball – World Series Champions. This feat is honored through a spectacular ring, rich in artistic storytelling and jewelry engineering. The 2021 Atlanta Braves World Series Ring is a true piece of hand-crafted excellence created in 14-karat yellow gold with 18.71-karat white gold accents with diamonds and genuine rubies that make this ring worthy of World Champions.

LEFT SIDE OF RING:

RIGHT SIDE OF RING:

Jostens also partnered with the Atlanta Braves in producing an Official World Series Championship Fan Collection allowing Braves Country to celebrate the World Series victory. Braves fans can capture their piece of the World Series and commemorate this exciting moment in franchise history through a selection of customized jewelry and championship collectibles. All pieces in this collection are inspired by the Braves official Championship Ring and are now available for a limited time by ordering online at: www.jostens.com/braves.

Jostens is a trusted partner in the academic and achievement channel, providing products, programs and services that help its customers celebrate moments that matter. The company’s products include yearbooks, publications, jewelry and consumer goods that serve the K-12 educational, college and professional sports segments. Founded in 1897 and based in Minneapolis, Minn., Jostens is a subsidiary of Platinum Equity and can be found online at www.jostens.com.

ABOUT THE ATLANTA BRAVES

Based in Atlanta since 1966, the Braves are the longest continuously operating franchise in Major League Baseball. Since 1991, Braves teams have earned two National League wild cards, 19 division championships, six National League pennants, and two World Series titles. Atlanta Braves games are telecast on Bally Sports South and Bally Sports Southeast. Radio broadcasts can be heard in Atlanta on 680 The Fan (AM) and regionally on the Atlanta Braves Radio Network. Follow the Braves at braves.com, facebook.com/braves, and twitter.com/braves.

Denial of responsibility! TechiLive.in is an automatic aggregator around the global media. All the content are available free on Internet. We have just arranged it in one platform for educational purpose only. In each content, the hyperlink to the primary source is specified. All trademarks belong to their rightful owners, all materials to their authors. If you are the owner of the content and do not want us to publish your materials on our website, please contact us by email – [email protected]. The content will be deleted within 24 hours.
#AtlantaBraves#WorldSeriesAtlantaBravesBringscelebrateChampionshipJOSTENS
Share